Pataskala, Ohio – Michael Shank Racing has long attracted some of the biggest names in the sport, and the first event of the 2013 GRAND-AM Rolex Sports Car Series season will continue that tradition as NASCAR pilot Marcos Ambrose will join the defending Rolex 24 At Daytona Champions for the Roar Before the 24 on January 4-6.

Ambrose will be assisting the team in place of 2008 Rolex 24 pole winner and frequent triathlete Ozz Negri, who suffered a leg injury in off-season training. Ambrose will share the testing duties in the No. 60 Ford Riley Daytona Prototype with John Pew, who has been confirmed as Negri’s full-season co-driver. 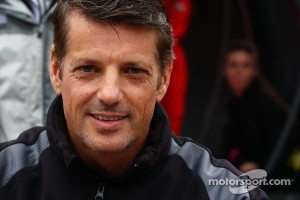 The Richard Petty Motorsports racer has two NASCAR Sprint Cup victories to his credit, winning the Watkins Glen races in 2011 and 2012. The former V8 Supercars superstar has raced at Daytona International Speedway with a Rolex 24 start in the GT Class in 2005, and he has tested a Daytona Prototype on the Circuit Gilles Villeneuve in Montreal.

Negri suffered a leg injury while training on his mountain bike, and is already working forward on his rehabilitation program, but will not be fully healed in time for the opening test at Daytona.

“I just want to say a big thanks to Marcos for jumping in and offering to help us out,” said team owner Mike Shank. “We are hoping to see Ozz back and ready to go as quickly as possible and we will be continuing to finalize our plans as that healing process moves forward. In the meantime, we’ve got a lot of work to do to be as ready as we can be for the 24, and we are fortunate to have someone like Marcos step in and help us out.”

The team will announce its full driver line-up for their 10th Rolex 24 At Daytona event during the Roar Before the 24 Test Days.

Rum Bum Racing ready for their first Rolex 24 at Daytona

TRG roars into the January test days with formidable lineup