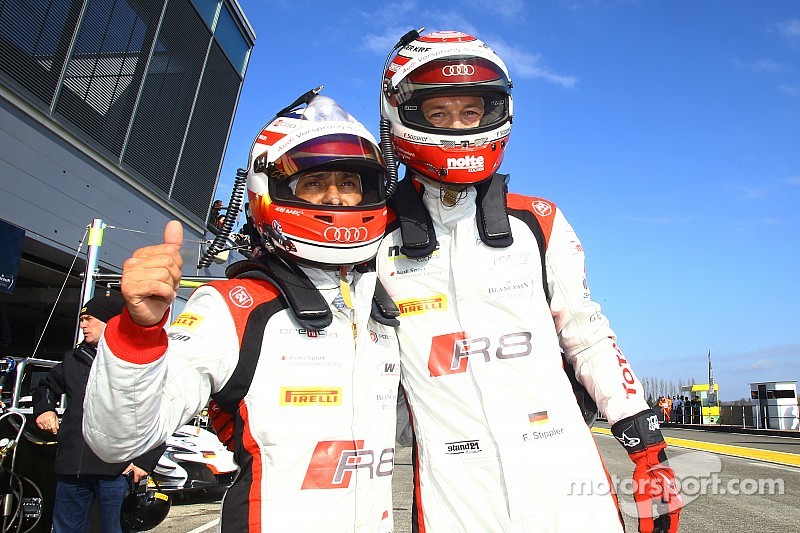 The all-new Audi R8 LMS ultra might soon be about to make its mark in GT3 racing, but it was the old faithful model that ruled the roost in qualifying for the first round of the Blancpain Sprint Series at Nogaro today.

Stephane Ortelli set a 1m24.732s in the No.3 Belgian Audi Club Team WRT to outpace Maxime Martin’s Team Brazil BMW Z4 by just 0.089s. Ortelli showed his experience and class by setting the time early on in the 10-minute shoot-out session.

The Bentley Continental GT3 driven by Maximillian Buhk was third fastest overall. Joining the Bentley on row two will be the Phoenix Audi which was driven by Markus Winkelhock.

Low track temperatures provided tricky conditions for the 19-car entry in the 55 minutes of qualifying this morning and they triggered plenty of action.

It was a dramatic start to the qualifying session for the Belgian Audi Club Team WRT squad which saw three of its four Audi R8 entries leave the track in the very first segment of the session.

Christopher Mies had a huge grassy moment before lightly tapping the barrier at the final corner in the No.2 Audi R8 LMS ultra. Stephane Richelmi, who shares the pole winning Audi with Ortelli then rotated at the hairpin before re-joining the track.

Robin Frijns in the No.1 Belgian Audi Club Team WRT R8 had a heftier incident, also at T14 and damaged the left side of the car. It put the car that the Dutchman shares with reigning champion Laurens Vanthoor out of contention for the rest of qualifying and as a consequence they will start the qualifying race from the rear of the grid.

While Frijns and Vanthoor had to sit out the rest of qualifying, the No.2 Audi was repaired and re-joined the fray with Enzo Ide at the wheel. Mies then placed seventh in the final ten minute shoot-out phase to complete a fine recovery.

There was a noteworthy performance from Craig Dolby in the Molitor Nissan GT NISMO GT3. The British racer qualified P6 in the car he will share with GT3 newcomer Sean Walkinshaw.

In the Blancpain Sprint Silver Cup category for young drivers of 25 years of age or under, it was the HTP Bentley driven by Olivier Lombard and Jules Szymkowiak that took the best time. Rapid young Dutchman Szymkowiak caused a sensation when he set the fourth fastest best lap in the second qualifying session.

The Pro-Am class which is held for a bronze and over 30-year-old silver categorised driver was led by the Fach Auto Porsche 911, with Martin Ragginger setting an impressive eighth best time in the session and ninth in the final shoot-out period.

The one-hour qualifying race for tomorrow’s first round takes place today at 14.15 local time. This will set the grid for Monday’s traditional Coupe De Pacques (Easter Trophy) main race where the bulk of the points will be accrued by the teams and drivers.