Gimple and Eversley return to Compass360 Racing for CTSCC 2014

Toronto, Canada - After a season-long see-saw battle at the head of the field, Kyle Gimple and Ryan Eversley fought valiantly throughout the 2013 Continental Tire Sports Car Challenge finale at Lime Rock Park. In the early stages it looked like they'd take the Street Tuner title, but in end had to settle for second place.

This didn't sit well with either of them, or their Compass360 team. And so, they'll be returning together to the #75 Children's Tumor Foundation Racing4Research Honda Civic Si for the 2014 season to fight for the championship they deserve.

"No question, we feel we should have won the championship in 2013," enthused Eversley. "We had a couple of races with what we felt were questionable calls from the tower that put us on the back foot, but we're going to return with what we know is a championship effort." 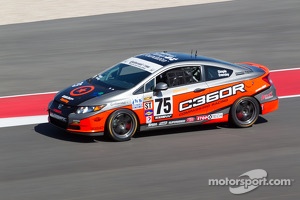 "We're thrilled to have Kyle and Ryan back together for 2014," said Team Principal Karl Thomson. "They proved to be a potent combination and we're expecting them to be in the hunt again. Kyle always did a great job in the first stint, starting on pole three times last year, and we know Ryan can bring it home." The duo notched four podium finishes in 2013.

As it has for the past few seasons, the #75 car will support the Children's Tumor Foundation's Racing4Research program. Eversley has shown himself to be one of the leading racers supporting the program, using his large on-line social network and in-person fundraising efforts to raise awareness and funding for the program.

"Neurofibromatosis affects one in every three thousand children, and we're truly thankful to have such a strong advocate in Ryan," noted R4R program director Jill Beck. "He and the Compass360 Racing team have been an important part of our success over the past few years and we're excited to be able to continue that in 2014."

C360R will run just two full-season Honda Civic Si's in CTSCC this year. "We want to focus on two championship-capable ST cars for 2014 since we're adding a two-car Subaru WRX STi Grand Sport program to our effort," remarked Technical Director Ray Lee. "Kyle and Ryan certainly give us that in the #75."