Bentley expected to compete in North America in 2014

The ever-expanding GT environment in North America is set to grow again, with the addition of the Bentley Continental GT expected this coming season.

The ever-expanding GT environment in North America is set to grow again, with the addition of the Bentley Continental GT expected this coming season.

The car will make it’s debut in the Gulf 12 Hours this week, and has confirmed that it is aiming to bring the car to North America in the TUDOR United SportsCar Championship, or the Pirelli World Challenge, and hope to have it here before the 2014 season is out.

“We are certainly looking at America and looking at the developments with the United SportsCar,” said Bentley Motors director of motorsport Brian Gush. “But it is far from clear as to what the series is, so we’d like to enter in America as soon as we understand. “We’ve also had a look at the Pirelli World Challenge, which is interesting because a GT3 car goes into the PWC unchanged. Because of the options, we’re talking to several teams.” 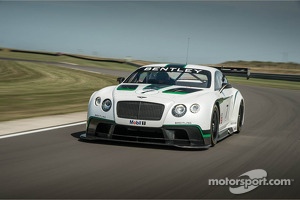 Reports are that a half-a-dozen teams are interested in the car, which will see some factory support, but not a full factory backed effort.

Deciding which series to head to first, which will see aero changes required to compete in the TUDOR United SportsCar Championship, is currently being discussed within the British manufacturer. An entry into the Pirelli World Challenge does not require any sort of major changes from the GT3 spec.

“We’d need to understand those before we commit. At the moment, we’re looking to perhaps race later in 2014 in the States but certainly not from the beginning,” Project Manager John Wickham said.

In Europe on the other hand, teams will be able to choose one of six to eight cars that will be made available for the start of 2014, and reports say they should have up to 15 complete for competition in Europe by the end of the next season.

While the car is expected to be very popular in Europe, Bentley is in contact with teams in the British GT Championship, GT Asia and the Asian Le Mans Series for 2014.