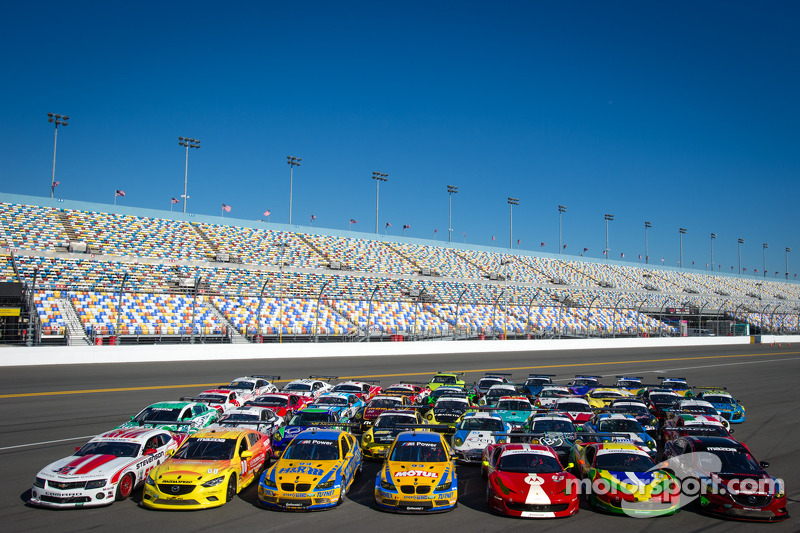 This is the second in a series of announcements providing details about the rules and regulations for the inaugural United SportsCar Racing season in 2014.

DAYTONA BEACH, Fla. – Class specifications continue to crystalize in preparation for next year’s inaugural United SportsCar Racing season, as officials strive for balanced performance and a close competitive environment that follows the “best of both worlds” mantra that is driving the merger of the American Le Mans Series (ALMS) presented by Tequila Patrón, GRAND-AM Rolex Sports Car Series and the International Motor Sports Association (IMSA).

When the first United SportsCar Racing season opens in January with the 52nd running of the Rolex 24 At Daytona, fans will be greeted by some high-speed familiarities at Daytona International Speedway, perhaps most noticeably in the production-based GT categories.

As an example, the new GT Le Mans (GTLM) class will retain all of the ALMS’ current GT class specs. An important new safety feature will be found in the cockpit of every GTLM car, as side nets around the driver’s seat will be utilized as an added measure of keeping drivers in place in the event of an incident.

The GT Daytona (GTD) class, the new home for what is now GRAND-AM’s Rolex Series GT teams, will run with adjusted performance levels to assist in cost reduction and an overall meshing with other classes. A method of restricting engine air intake will be mandatory, as will single-lug, single piece wheels. Every GTD car will carry a series-specified rear wing.

GTD may also include FIA GT3 cars with minimal modifications, providing they meet class performance targets. Overall, however, the regulations will be based on the current Rolex Series GT rules. In addition, the Rolex Series’ current GX class will be transitioned into GTD.

On to the headlining Prototype (P) class, where series officials are working overtime to balance performance between the ALMS’ P2 cars, DeltaWing and Rolex Series’ Daytona Prototypes. That work continues but there are these definite mandates:


- Paddle shifters and 6-speed transmissions /gearboxes allowed for all cars


And lastly, here’s the easy one: The popular and highly competitive Prototype Challenge (PC) class now competing in the ALMS will return with all current technical aspects intact.

Cars in every class except for PC will also carry series-mandated data loggers, which will be downloaded on every pit stop. Teams will be responsible for the proper operation of the data loggers.

To help delineate the classes, each car will use standardized number panels with colored backgrounds identifying each class, similar to what is being used currently in the ALMS. The panels will be backlit for night races.

Another feature sure to be popular with fans is the return of a new and improved Leader Lights system, which will be required on all cars. The colored lights, which will be similar in color to the number panels, will enable fans to determine each car’s running position within its class at all times during United SportsCar Racing events.

“We are moving carefully, but with clear momentum,” said Scot Elkins, chief operating officer of IMSA and the ALMS and managing director, technical regulations and development for GRAND-AM.

“The goal is to get it right, which entails making the on-track action safe, competitive and reasonable when it comes to cost. Like we’ve said all along: the ‘best of both worlds’ is what we’re after here. We’re getting closer each and every day.”

GX Class to be folded, introduced to USCR GTD Class