Corvette Daytona Prototypes are ready to take on the Glen

What will the Chevrolet contingent be able to accomplish at the Glen this weekend?

DETROIT (June 24, 2014) – After a short break following a victory on the streets of Belle Isle in Detroit, Chevrolet’s Corvette Daytona Prototype teams return to the TUDOR United SportsCar Championship this weekend at one of America’s most historic circuits.

Watkins Glen International plays host to the full field of TUDOR Championship entries – including five Corvette DPs – for the Sahlen’s Six Hours at the Glen. The Bowtie brand is on a three-race winning streak at Watkins Glen. That includes consecutive 1-2 finishes for Corvette DPs the last two seasons – both by Action Express Racing.

Another victory would add to Chevrolet’s championship lead in the Prototype Engine Manufacturer standings. The lead is six points over Ford.

Joao Barbosa was part of the last two victories at Watkins Glen including last year with Christian Fittipaldi. Winners this year of the Rolex 24 At Daytona to start the season, the Barbosa/Fittipaldi duo stands second in the TUDOR Championship’s Prototype standings behind Wayne Taylor Racing’s Jordan and Ricky Taylor. The brothers assumed the championship lead with a victory in the previous round at Detroit and drive with Max Angelelli at Watkins Glen.

Spirit of Daytona’s Richard Westbrook and Michael Valiante, coming off a runner-up finish at Detroit, also drive a Corvette DP. Burt and Brian Frisselle return in Action Express’ second entry along with Jon Fogarty, and Marsh Racing’s trio of Eric Curran, Boris Said and Guy Cosmo round out the Corvette DP contingent.

The race will be the first since March where all four TUDOR Championship classes will race at the same time. A preliminary entry list of 55 cars – sharing 3.37 miles around the 11-turn circuit – means there will be no time to relax. 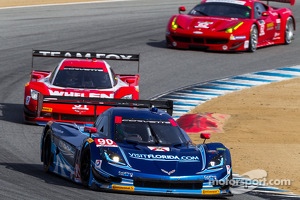 “Watkins Glen is one of the classic road-racing venues in America,” said Jim Lutz, Chevrolet’s Corvette Daytona Prototype Program Manager. “Six hours around The Glen is an incredibly difficult task. There is a good mix of high-speed straights and corners along with demanding technical sections. It will take a well-balanced car to have success in this year’s race. With the Daytona Prototypes running in a different configuration than in years past, preparation will be key. Our simulations and having multiple Corvette DPs test at Watkins Glen should benefit all our teams. But the main issue will be managing traffic. A grid of 55 cars is considerably more than we’ve seen the last few years. It only adds to the challenge of winning this important race.”

The Watkins Glen round also doubles as the third race of the Tequila Patrón North American Endurance Cup. It is a special four-race competition made up of the TUDOR Championship’s true endurance rounds. Barbosa and Fittipaldi lead the driver standings with Action Express’ No. 5 Corvette DP leading the team category.

Camaro Z/28.R Continuing Strong Debut Season In the Continental Tire Sports Car Challenge, four Camaro Z/28.R race cars dot the entry for the series’ sixth round. On the strength of three podium finishes in the last four races for the Camaro in its debut season, Chevrolet stands second in the Grand Sport (GS) manufacturer standings – just one point out of first place.

Stevenson Motorsports and CKS Autosport each have two Camaros on the entry list. CKS’ duo of Eric Curran and Lawson Aschenbach were runners-up two years ago at Watkins Glen. Sebring race-winners Robin Liddell and Andrew Davis from Stevenson Motorsports are the highest-placed Camaro drivers in the driver’s standings at sixth.

“To be second in the manufacturer championship in our first year with the Camaro Z/28.R is a fantastic achievement,” said Lisa Talarico, Chevrolet’s Camaro Z/28.R Program Manager. “It’s a testament to the teamwork between our engineers, the group at Pratt & Miller Engineering and our partner teams. Watkins Glen is an historic circuit and it would be fantastic for a legendary name like the Camaro to score a second victory.”

Bob Bondurant goes back to Watkins Glen, 47 years after it tried to kill him