In today's 15-minute GTD qualifying session for the 2nd round of the 2014 TUDOR United SportsCar Championship season, Seth Neiman qualified the PR Newswire / UBM Tech / eSilicon No. 35 Audi R8 LMS in 22nd place, while Nelson Canache Jr. qualified the Venezuela / Black River Caviar / eSilicon No. 45 Audi R8 LMS in 21st place. The Flying Lizard Motorsports team again elected to use the session for setup work and driver time rather than focus on qualifying the car at the front for the long 12-hour endurance race. 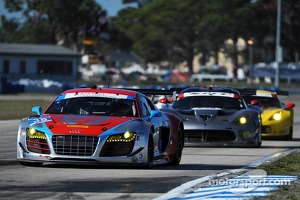 Tim Pappas, originally slated to drive in the No. 45 Audi R8 LMS, will unfortunately not be able to compete in the race after a bout of food poisoning early in the week. Tim and the team discussed his recovering health each day through the week but decided together on Wednesday night that driving in the 12-hour race on Saturday would be imprudent. Instead, Tim will continue to rest up in advance of his full season program with Black Swan Racing in Pirelli World Challenge and will rejoin the the Flying Lizard team for additional races in the future. Alessandro Latif has been moved from the No. 35 to the No. 45 in Tim's absence, and the No. 35 will compete with three drivers – Seth Neiman, Dion von Moltke, and Filipe Albuquerque. The No. 45 will be piloted by Nelson Canache Jr., Spencer Pumpelly, Markus Winkelhock, and Alessandro.