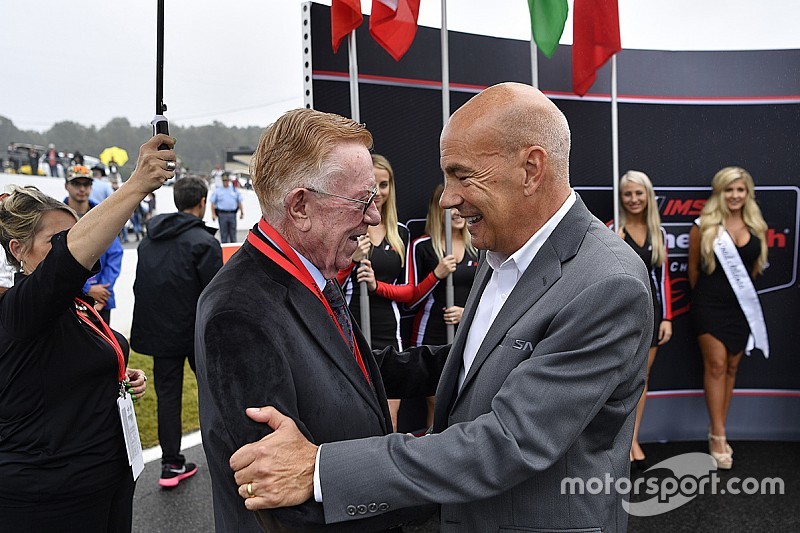 IMSA’s Jim France and Scott Atherton have hailed their friend and colleague Don Panoz, who died early this morning, as “a true gentleman” and “a consummate idea guy”.

The IMSA statement reads as follows:

The IMSA community is profoundly saddened by the news that its vice chairman, Don Panoz, passed away from cancer at the age of 83.

A lifelong entrepreneur, the charismatic Panoz is best known to race fans as the founder of the American Le Mans Series (ALMS) and creator of the famously loud and uniquely styled front-engined Panoz LMP1 racecars.

Panoz fell in love with the unique atmosphere at the 24 Hours of Le Mans after experiencing it himself for the first time. Panoz aimed to replicate the spirit of Le Mans, its unique rules and regulations while adding his own fan-friendly atmosphere, first through the creation of a “one-off” event at Road Atlanta, the 10-hour or 1,000-mile Petit Le Mans, which debuted on Oct. 11, 1998. The overall winners of that inaugural race were Eric van de Poele, Emmanuel Collard and Wayne Taylor.

Buoyed by the success of Petit Le Mans, Panoz founded the ALMS, a series of races throughout North America on world-class racetracks, including three that he owned: Sebring International Raceway, Road Atlanta, and Mosport – what today is known as Canadian Tire Motorsport Park. Panoz became a driving force for sports car racing in North America at a time when the sport was badly in need of direction, vision and leadership.

Under Panoz’s watchful eye, the ALMS was the first motorsports sanctioning bodies to open the pre-race starting grid to race fans, enabling them to walk among the cars and drivers on the racetrack minutes before the start of each race. It’s a practice that is still a part of every IMSA WeatherTech SportsCar Championship and IMSA Continental Tire SportsCar Challenge race – and has been replicated by many racing organizations around the world.

In 2012, Panoz recognized that to truly achieve the type of success he envisioned for sports car racing in North America, a merger between the ALMS and the Grand-Am Road Racing Association was needed. He joined forces with Grand-Am founder Jim France – and together with their respective CEOs, Scott Atherton with ALMS and Ed Bennett with Grand-Am – and the historic merger was announced at Daytona International Speedway on Sept. 5, 2012.

“Don Panoz will be remembered as a one of the most important figures in the history of sports car racing,” NASCAR chairman and CEO and IMSA chairman Jim France said. “Don was a true gentleman who deeply cared about our sport. That was obvious to all who are involved with sports car racing. He became a great friend and partner, and we shared the pride of combining Grand-Am and the American Le Mans Series and re-establishing the IMSA brand, bringing sports car racing together again. Don was a true innovator whose work touched many lives.”

With France as chairman, Panoz became vice chairman of the new organization, which took on the International Motor Sports Association (IMSA) moniker. Panoz had acquired the rights to use the IMSA name years earlier for his own sanctioning body, extending the lineage of the highly respected organization founded in 1969 by Bill France Sr. and John and Peggy Bishop.

“It is difficult to find the right words to express my sadness with the news of Don’s passing,” said Atherton, who became president of the new IMSA. “He was a very special guy – the most visionary and creative person I have ever worked with. He was a serial entrepreneur of the highest order. Don was the consummate ‘idea guy’ – not all of them good, mind you – but he came up with several that were truly brilliant that transformed entire industries.

“Many of us who make our living in motorsport owe him a debt of gratitude. He deserves full credit for putting professional sports car racing back on the map when it was at its lowest point. His acquisition of IMSA, Sebring International Raceway, Road Atlanta, Mosport and the creation of the American Le Mans Series are enduring monuments of his legacy.”

Panoz’s involvement in motorsport extended well beyond the ALMS and his racetracks, which all were part of his Panoz Motor Sports Group. His Panoz Esperante GTR-1, was the first successful front-engine prototype race car in more than 30 years. Following that, Panoz was a pioneer in the introduction of hybrid technology in sports car racing, bringing the car known as “Sparky” into competition at the 1998 Petit Le Mans.

Another highlight was the Panoz Esperante GT LM, which won both the 24 Hours of Le Mans and Twelve Hours of Sebring in 2006, which also earned Panoz the coveted “Spirit of Le Mans” award from the Automobile Club de l’Ouest, organizers of the annual 24-hour race in France.

In the early 2010s, Panoz was instrumental in the development of the revolutionary DeltaWing race car, which was half the weight and horsepower, but all the performance of other prototype race cars. The DeltaWing raced in the 24 Hours of Le Mans, the ALMS and the WeatherTech Championship until the end of the 2016 season.

Beyond sports cars, the Panoz Motor Sports Group also included Van Diemen, which built successful chassis used in open-wheel and prototype development series; Élan Technologies, which built engines and chassis for a variety of race cars; and G-Force, which built IndyCar chassis that would win the Indianapolis 500 in 1997, 1998, 2003 and 2004. The organization also built the well-respected DP01 chassis used in the final season of the Champ Car World Series before its merger with IndyCar in 2008.

“Don loved the challenge that top-level motorsport represented,” Atherton said. “He loved to compete and was always looking to achieve success with game-changing innovation and by doing things differently. Putting the engine in the front of a modern LMP1 racecar, introducing hybrid engine technology at Le Mans long before it was embraced by mainstream manufacturers and, of course, the DeltaWing are but a few of many, many examples.”

Panoz’s racing endeavors were made possible by his entrepreneurial success in other ventures. His career began in 1961 when he and friend Milan “Mike” Puskar, a fellow alum of West Virginia University who also served alongside Panoz in the Army, founded Milan Pharmaceuticals in White Sulphur Springs, West Virginia. Panoz was the youngest president of a pharmaceutical company in the United States.

In the 1970s, Panoz created Élan Corp. in Ireland, which became a leader in drug delivery products and technology. Panoz led a research team that created time-release medication through a transdermal patch, commonly used today as a nicotine patch. Élan Corp. was the first Irish company to be publicly listed on the U.S. stock exchange, and Panoz retained more than 300 pharmaceutical industry patents.

Panoz founded Élan Technologies, which includes Élan Composites, Élan Power, Élan Precision and Élan Fabrication; and the Panoz Institute at Trinity College in Dublin, Ireland, which houses the School of Pharmacy and Pharmaceutical Sciences. He also founded international resorts such as Chateau Élan in Georgia, The Vintage Golf Club in Australia, Diablo Grande Winery & Resort in California, and St. Andrews Bay Resort and Spa in Scotland.

Panoz earned several prestigious accolades throughout his life. He was the 29th inductee into the Entrepreneurship Hall of Fame in 2013, the Bob Russo Heritage Award recipient from the Motorsports Hall of Fame of America in 2014, the La Bella Machina award winner at the 2015 Concorso Italiano in Monterey, California, and the 2015 recipient of the Women In The Winner’s Circle Leadership Award from racing pioneer Lyn St. James and the Women’s Sports Foundation.

That award was presented at the 2015 Petit Le Mans at Road Atlanta. Panoz also is a member of the West Virginia University College of Business Hall of Fame.

“I had the honor and privilege of working side-by-side with Don for nearly 15 years – witnessing many of his landmark achievements in motorsports, hotels, golf resorts, residential real estate and much more, not just in America, but around the world,” Atherton concluded. “His drive, energy and work ethic were truly remarkable. Don ran on the rev limiter right to the end. But he was also a lot of fun to be around, always quick with a joke or a fascinating tale from his past. We have all lost a great man and many of us have lost a great friend and mentor.”

Panoz leaves behind his wife of 63 years Nancy; sons Danny and Chris; daughters Donna, Dena, Lisa and Andrea, along with many grandchildren and great grandchildren, and numerous longtime friends and business associates from around the world.