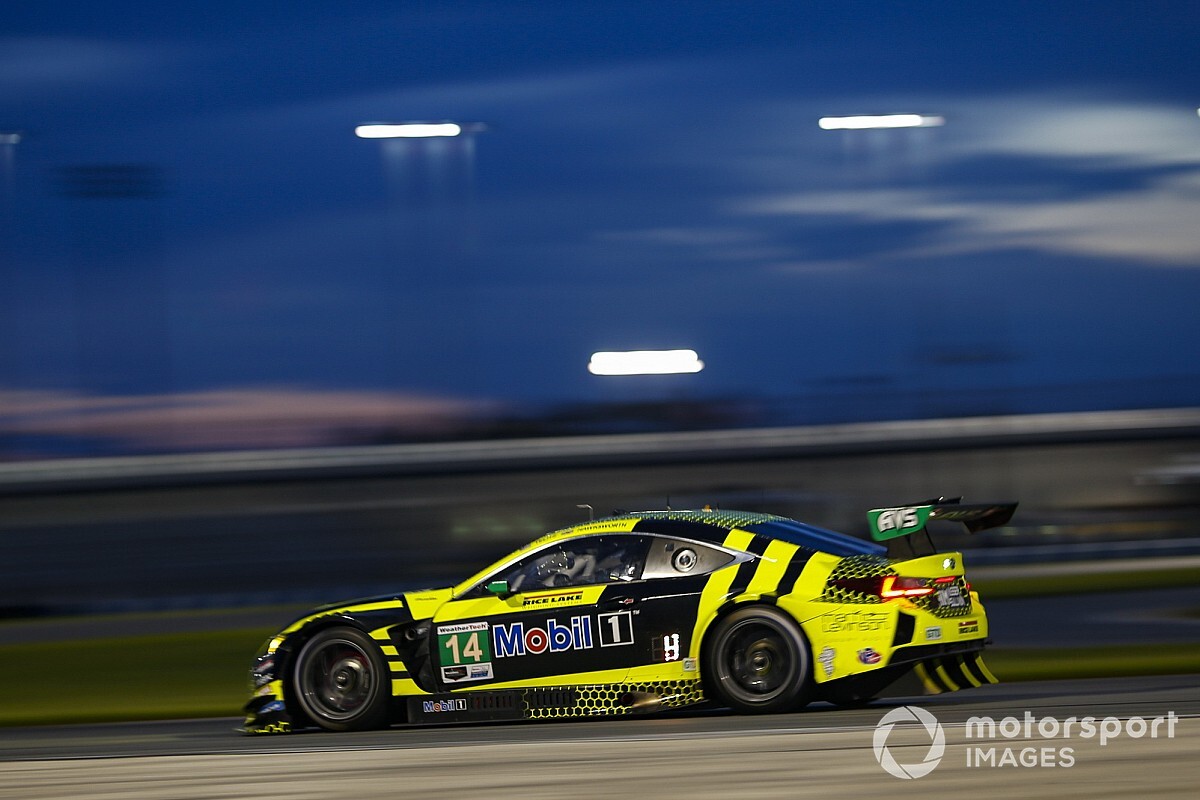 AIM Vasser-Sullivan’s 1-2 finish in last Saturday’s IMSA WeatherTech 240 was a dominant affair, but second placed Townsend Bell had a more dramatic tale to tell about his charter flight between Indianapolis and Daytona when the plane malfunctioned.

Bell had been fulfilling his NBC IndyCar commentator role alongside Leigh Diffey and Paul Tracy, but then had to fly with Jimmy Vasser – co-owner of Santino Ferrucci’s Dale Coyne Racing with Vasser-Sullivan IndyCar entry – down to Daytona, to race for the AVS Lexus team in the IMSA WeatherTech Series Championship’s GT Daytona class.

Bell tweeted out an onboard pic from the executive jet:

Then, after completing a Lexus 1-2 with co-driver Frankie Montecalvo, behind their winning teammates Aaron Telitz and Jack Hawksworth, Bell told the story of a remarkable Saturday.

“Second place here at Daytona, not bad for an old guy that only was here for a few hours yesterday. So proud of my Lexus team, the AIM Vasser Sullivan guys. We just rolled off the truck prepared and ready to go. We had great pit stop and I kept trying to catch Jack [Hawksworth], but every time I would push, I would heat up my tires and I just couldn’t do much so congrats to the guys on the 14 car.

“Today really hit home showing up at Daytona and Indianapolis. Two of the most significant racetracks in the world and two of the largest race tracks in the world with the biggest attendance. When you show up at those two facilities in the same day it really hammers home what a unique time it is for all of us.”

Regarding his flight down to Florida, Bell said: “Frightened is probably accurate because we had an issue in the sky. Any time the pilot pulls out the owner’s manual, it’s generally not a good sign mid-flight.

“It was one of those things where we could tell on takeoff that the pressurization was kind of in and out. You could feel your ears plugging up and then releasing. I could hear the pressurization fan in the back of the plane going. I went up and talked to the pilots and they were like, ‘We know. We’re working on it.’

“So, we had to level off at like 12,000 feet while they were working on it and they said they weren’t going to be able to do this and we were going to have to go back to Indy. I was like, ‘There’s no way after all of the effort put into this that I’m missing the race!’ So Jimmy Vasser and I kind of huddled with the pilot and we came up with the plan to fly low.

“The only problem is when you do that, you burn fuel, so we didn’t have enough gas, so then the pilot said, ‘We’ll have to drop you guys and you’ll have to jump on another charter.’ We were like, ‘Splash and go, splash and go!’

“So, we had a whole splash and go strategy worked out, but in the end, we were able to manually pressurize the cabin and climb to 27,000 feet, get better fuel efficiency.

“It’s a long way of telling you we were so determined to be here tonight and I’m so glad we did because it was the first one-two for AIM Vasser-Sullivan and Lexus. What a great feeling!”

The plane landed in Jacksonville, FL, due to the storms around Daytona, and Bell and Vasser drove the final leg to Daytona International Speedway.

Telitz and Hawksworth in charge

Telitz, who was confirmed as full-time replacement for outgoing Parker Chase only last week, put on a clinic in the opening half of the race, and handed off to longtime Lexus ace Hawksworth who maintained this high standard all the way to the checkered flag.

“I told Jack earlier in the week that my job today was to make his job as easy as possible, so I’m happy that he thought it was easy to just cruise around out there,” said the Wisconsin native. “Our Lexus RC F GT3 was incredible today. Obviously, the two Lexus cars finishing one-two… we can’t ask for much more than that.”

Former IndyCar racer Hawksworth, for whom this was a fourth IMSA victory and third in a Lexus RC F, said: “My job was quite easy because Aaron quite frankly put all of the hard work in the beginning with a good qualifying lap, started up front and then managed to get out front and get us a gap.

“Then after I got in, it was just about maintaining and making sure we kept everything under control. The fuel windows were very tight for this race for either a two-stop or a three-stop, so we had to monitor fuel a little bit.

“I didn’t see another GTD car all day so I’m not complaining. The Lexus RC F GT3s were absolutely on rails [and] I’m super stoked to have Aaron in the car for the rest of the season.” 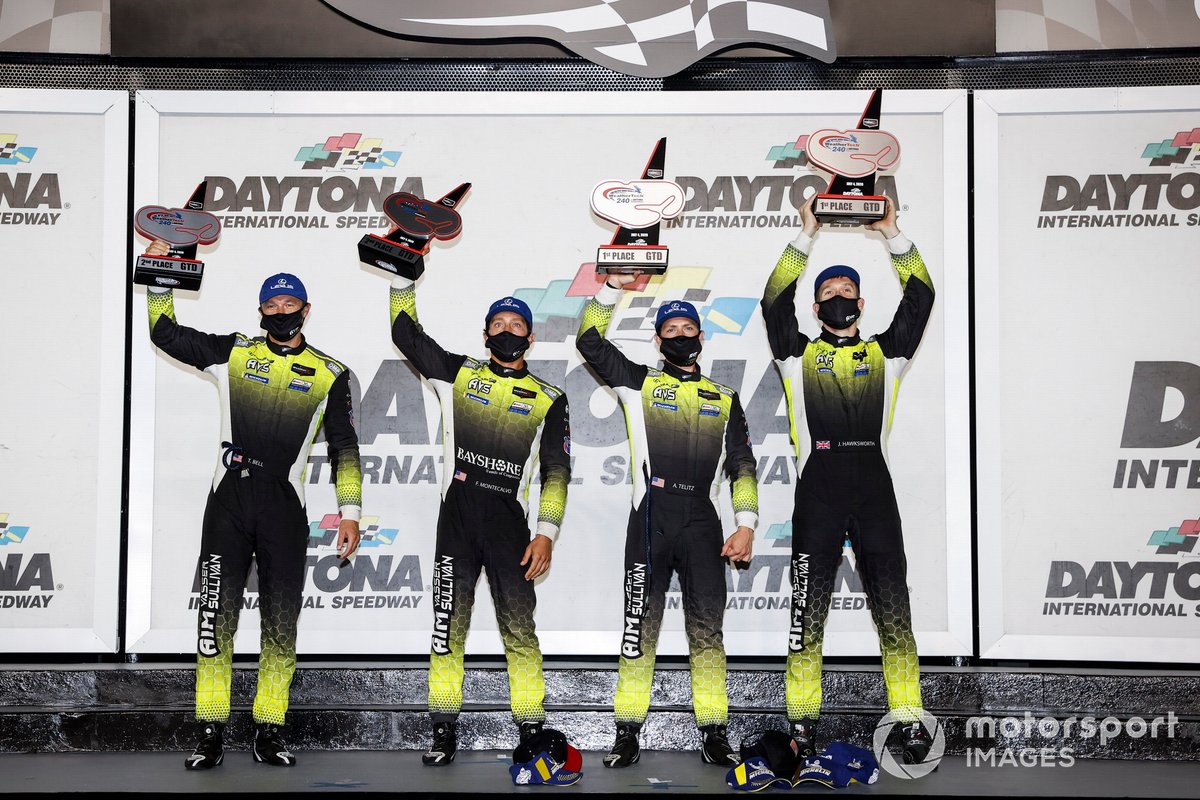