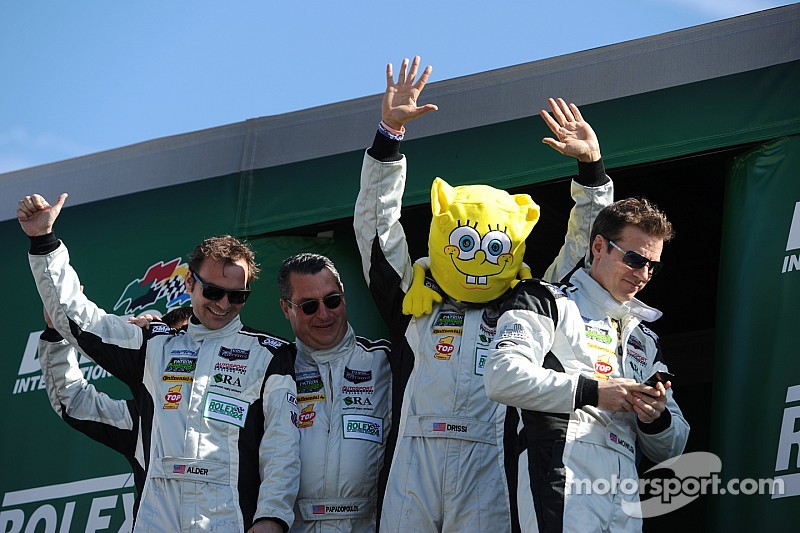 Daytona Beach, Fla. – Johnny Mowlem and his BAR1 Motorsports teammates fought their way around the clock twice and took second in the Prototype Challenge class in the Rolex 24 at Daytona, part of the Tudor United SportsCar Championship, and the first round of the Tequila Patron North American Endurance Championship.

Mowlem, driving the BAR1 Motorsports team’s No. 16 SpongeBob (the movie) / Autosports Designs / Southwest Realty Advisors / Top1 Oil car and who put the car on the class pole earlier in the week, took the race start and drove a double stint, handing over the car after nearly 2 hours in the class lead and also 5th place overall.

When I saw Colin Braun's car in the wall, all that flashed through my mind was a nice shiny Rolex watch and what might have been.

A number of car problems then hit to put the #16 BAR1 Motorsports car nearly 10 laps down on the Prototype Challenge class leader and outside the top 35 overall. But then the fight-back began, with the whole team doing a superb job at the pit-stops and the drivers all performing on track to drag themselves back into contention.

With 3 hours to go they took second place, only for a left rear puncture to drop them back to third again. This third place then became second place when the class leading Core Autosport #54 PC crashed with 20 minutes left in the race.

This meant that for Mowlem the second place finish was bitter sweet.

"When I saw Colin Braun's car in the wall, all that flashed through my mind was a nice shiny Rolex watch and what might have been. I felt awful for the Core Motorsports team, as they truly deserved that win, and them crashing made it worse for me especially as just 2 hours before we had taken second place from the PR1 Motorsports team, who of course then inherited that win. Having said that, congratulations to them for a great race, as they also had their own problems to overcome. No one wins a race as tough as the Daytona 24 hours without fully deserving it." Said Mowlem.

"Also, I am so pleased for Tom Papadopoulos and Brian Alder for seeing their plans come together so well, and a big thank you to my other 2 team-mates Tomy Drisi and also Martin Plowman who superbly stepped in for a couple of stints and really helped me out from going over my maximum driving time for the race! Also I must thank my engineers John Travis and Michael McLaughlin who gave me a racecar that made me look good and ALL the boys who worked so hard both before and during the race to allow us to get such a great result. I feel a bit battered and bruised this morning, but pleased nevertheless. Only thing that would make things perfect would be another shiny Rolex on my bedside locker!"

The "Spongebob" #16 BAR1 Motorsports car eventually finished 2nd in class and 10 the overall, giving Mowlem his sixth top 10 finish in the American endurance classic and his fourth class podium finish alongside his GT victory in 2006.

The next race for the TUSC and North American Endurance Championship will be the 12 Hours of Sebring, also in Florida, USA.

VisitFlorida.com Racing finishes fourth in the Rolex 24 At Daytona