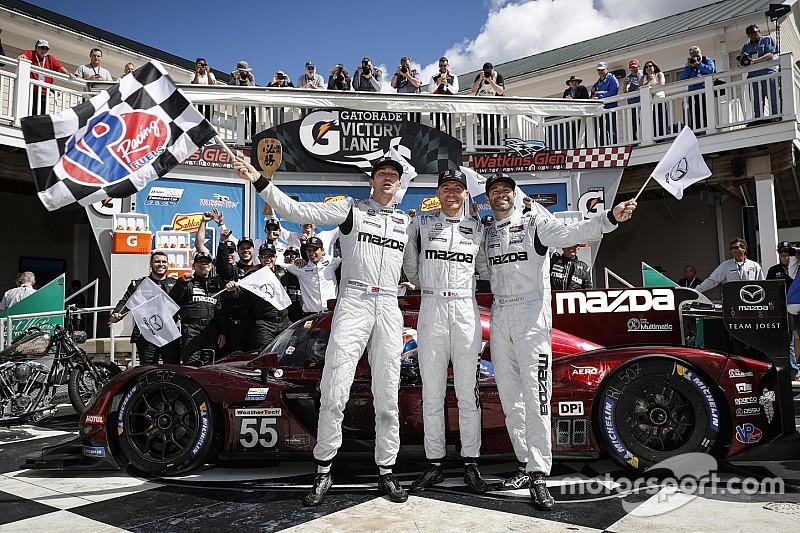 Pole-winner for one of the IMSA WeatherTech SportsCar Championship's most prestigious races, Jarvis led from the start in the #77 Mazda but following the first round of stops, under green flag conditions, the #55 Mazda driven by Tincknell hit the front.

Bomarito continued Tincknell’s good work in the second hour, two seconds ahead of Bernhard in the #77, and the pair almost a minute-and-a-half ahead of the lead Cadillac, the Wayne Taylor Racing entry of Renger van der Zande which had been quicker than the Acura Team Penskes in the early stages.

Under the third full-course caution which flew as the race approached its two-hour mark and was caused by an off for Stephen Simpson in the #84 JDC Miller Motorsports Cadillac, Bomarito pitted the leading Mazda but Bernhard stayed out to prevent as many of the team’s rivals from getting their lap back in a wave-around under yellow.

That same pitstop sequence saw Penske able to send the #7 Acura of Helio Castroneves out ahead of the WTR Cadillac, now driven by Jordan Taylor, to gain third place. Indeed, the #6 Acura ARX-05 of Dane Cameron and Juan Pablo Montoya was up to fourth despite having started the race from pitlane after the team spotted a cut tire on the formation lap, as Montoya managed to pass Taylor on that restart.

The Acura pair then stretched away from Taylor while battling among themselves, and were able to keep Bomarito vaguely in sight without ever closing on him.

The next round of stops, after 2h30min, saw the #6 Acura of Montoya emerge well in front of its sister car, although still behind Bomarito, while the now out-of-sequence Bernhard cycled to the front. Montoya then stayed in touch with Bomarito while their tires were fresh, the pair of them dropping Castroneves.

That battle became the battle for the lead when Bernhard again pitted the #77 Mazda off-sequence and handed over to Nunez 20mins later, and Acura appeared to split its strategy too, stopping Montoya a couple minutes later. Meanwhile, Taylor was coming back at Castroneves to try and split the Acuras.

Montoya stayed within eight seconds of the #55 Mazda after Bomarito handed over to Pla, but JPM remained on the same sequence as the #77 Mazda, pitting on the same lap at the 3hr30min mark – Nunez staying on board but Montoya handing over the #6 Acura to Cameron.

The #7 Acura fell further out of podium contention when Castroneves tangled with Matt McMurry’s LMP2 PR1/Mathiasen Motorsport Oreca, just before handing over to Ricky Taylor. The latter then had to try and make up time on his brother driving the WTR Cadillac.

Joao Barbosa refusing to go two laps down in the #5 Action Express Racing Cadillac held up the leader so much that the second-placed Mazda of Pla closed onto the tail of its sister machine and when the frustrated Nunez pitted to hand back to Jarvis, Pla was able to turn some fast laps, pit, and re-emerge in front with 100minutes to go.

However, Jarvis moved into the lead five minutes later, the pair of them some 18sec clear of Cameron. A further 66sec down, Ricky Taylor was pressuring van der Zande for fourth.

Jarvis had pulled seven seconds on Pla by the time the full-course caution flew with 1h24min to go: the Performance Tech Motorsports LMP2 Oreca which had recently tangled with a couple of GTLM cars had then emerged from pitlane only to die on track and needed retrieving.

That prompted all the leaders to stop for fuel, Tincknell took over from Pla in the #55 but needed seven laps less fuel than the sister car and beat it out of the pitlane. However, Montoya now in the #6 Acura vaulted both of them and took the lead, while Castroneves stayed bottled up behind the WTR Cadillac. These top five now ran together.

Montoya held off the Mazdas at the restart but Tincknell kept up the pressure on into the final hour, trying to figure out a way around the ex-F1 and IndyCar ace. Tincknell lost time when he tried to pass Montoya around the outside of Turn 8 with 48mins to go.

Five minutes later, Tincknell dived down the inside of Turn 8 to grab the lead and although it was a hard maneuver, it was fair, and the lead was his.

Jarvis then started pressuring Montoya as the lead Mazda started pulling out an advantage – something he did rapidly, gaining a 5sec lead within three laps. A dozen seconds behind the battle for second, van der Zande continued to hold off Castroneves.

Tincknell’s final stop came with 34mins remaining, taking on a set of new Michelins too. Montoya and Jarvis pitted next time by, and the Mazda just got out ahead of the Acura.

Jarvis closed on Tincknell in the final stint, the pair of them dropping Montoya easily, and with 22mins to go, the pair were within a second of their fastest laps of the race. It was a nail-biting time – and nerves got still more frayed in the #55 camp as the bodywork over the rear engine cover appeared to have loosened on the left side, and Jarvis briefly got within a second of his teammate.

However, team orders seem to have prevailed in the final 10mins, the pair of Mazdas slowing into the 1min34s, over five seconds off the pace. The pair crossed the line 0.353sec apart, but 11.5sec clear of Montoya, while van der Zande was 13sec further back but 13sec ahead of Castroneves.

Of the significant runners with issues, Felipe Nasr suffered a puncture on the opening lap, sending the #31 Action Express Racing Cadillac into the gravel, and forcing it to limp around the 3.4 mile lap.

By the time it rejoined with new rear bodywork, it was two laps down and soon after the first hour was complete, the astonishing pace of the Mazdas put it a further lap behind and it would finish in seventh, behind its sister car.

Colin Braun brought the CORE autosport Nissan to a halt after 111 laps with no drive.

GTLM: Porsche makes it four in a row

Richard Westbrook in the #67 Ford GT led from the start but suffered a loose steering column at the end of the opening hour, causing him to lose the lead, handing the class lead to the #3 Corvette C7.R of Antonio Garcia.

However, it was by no means a runaway for the ‘Vette, and into the third hour, it was the RLL Racing-run BMW M8 of Tom Blomqvist that led the class ahead of the Corvette by less than a second with the second BMW of Jesse Krohn running third, less than a second behind. This trio was chased closely by the two Porsche 911 RSRs of Earl Bamber and Patrick Pilet and the two Fords.

Jan Magnussen moved the #3 back past Blomqvist after 2h30min, and Bamber closed on the other BMW. But following the next round of stops, just before the halfway mark, the #911 and #912 Porsches of Nick Tandy and Vanthoor emerged in front of Magnussen and the two BMWs.

A split strategy would see Tandy, Blomqvist and Dirk Muller in the #66 Ford leading while Ryan Briscoe in the #67 Ford, Vanthoor, Garcia and Krohn stopped. That became the lead battle with two hours to go, and soon after that, Garcia blasted by Vanthoor to take the lead in the Corvette, with Krohn running a further four seconds back.

The yellow-flag stop with 70mins to go came just after Garcia – battling with radio issues – had just made a stop. However, he returned to pitlane under yellow, so that the restart would see Tandy leading the Fords of Westbrook and Muller, Connor De Phillippi in the #25 BMW, Bamber in the #911 Porsche and then Garcia and Edwards. However, Garcia and Edwards deposed Bamber next time by and Garcia kept moving forward, passing the second BMW to grab fourth. Connor De Phillippi sadly had to pit his BMW again due to the damage sustained in a collision with the errant LMP2 car of Andrew Evans, and as they tried to tape down his hood again, the car suffered a fuel fire.

As Garcia started threatening Muller’s third place, Tandy up front was setting his fastest laps of the race, pulling almost 7sec away from Westbrook’s Ford. With 48mins to go, both Tandy and Garcia made their final scheduled stops leaving Fords running 1-2, 3.5sec apart and Bamber’s Porsche third a further 3.3sec in arrears. Next time by, the two Fords stopped, and fell behind Garcia who started inching up on Tandy, the pair of them still behind Bamber. With 20mins to go, Garcia was within 2.5sec of Tandy.

Bamber ducked in for a splash-n-dash with 12mins to go leaving Tandy leading ahead of Garcia, and in the last five minutes that gap went under one second, but they crossed the line with the 911 still half a second ahead.

The #4 Corvette of Tommy Milner clashed with Vanthoor on the opening lap in the uphill Esses, sending the American car into a spin, dum-dumming off the barriers on either side of the track and eliminating it from the race.

Turner Motorsports’ chances took a knock when the BMW, at that point driven by Bill Auberlen, was struck by an errant prototype – fortunately toward the end of the lap so he didn’t have far to limp with a bent wheel-rim.

With two hours to go Ricky Feller kept the Land Motorsport Audi just ahead of the two MSR Acuras with the two Lexus RC Fs next up chased by Pfaff’s Porsche and the Turner BMW.

The restart with 66mins to go saw the Meyer Shank Acuras out front chased by Hawksworth’s Lexus, but teammate Townsend Bell who had driven well to get up to second in the middle of the race was penalized for leaving his pits with his seatbelts not secured.

With 53mins to go the final fuel window opened and Shank pulled in both Acuras, Turner doing the same for Auberlen, and the rest of the GTD runners following suit – with the exception of the Starworks Motorsport Audi, which Peter Baron elected to keep out front with Ryan Dalziel at the wheel, while praying for a caution period.

Behind him, Farnbacher’s Meyer Shank Racing Acura ran second, with Auberlen’s BMW and Vilander’s Ferrari taking advantage of Katherine Legge stalling briefly as she departed her pitbox. Legge applied the pressure on Vilander for the final half-hour but could not find a way through.

Meanwhile up front, Dalziel had to concede the lead to Farnbacher with 15mins to go, and with 11mins to go he had to pit. Auberlen closed to within a second of Farnbacher but couldn’t find a way past.

An unsighted Ben Keating in the Riley Motorsports Mercedes-AMG GT3 struck the spinning Corvette of Milner on the opening lap and was eliminated on the spot.