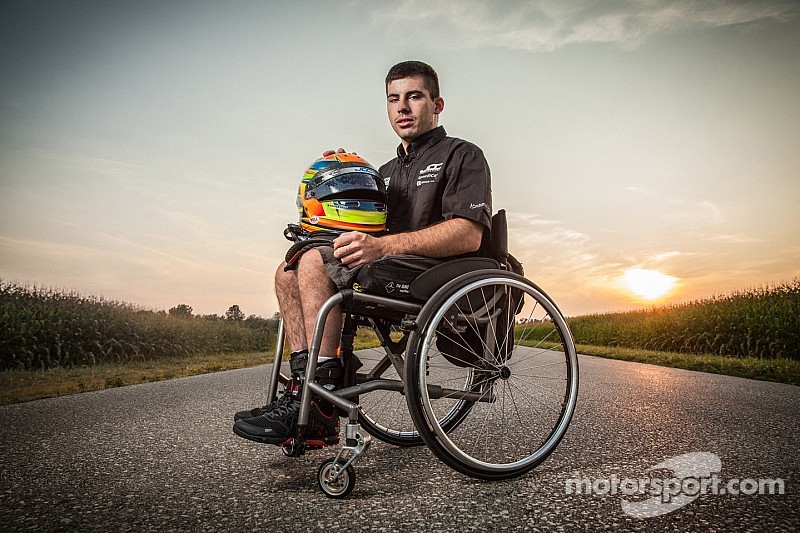 One of his racing heroes is Alessandro Zanardi and that should come as no surprise. Michael Johnson, the 22-year-old Pro Mazda Championship driver from Flint, Michigan is preparing for his second season in the Road to Indy middle-echelon category, again working with JDC Motorsports for the 2015 campaign.

What’s different about Johnson - from all of his competitors - is that he is the sole paralyzed driver licensed by INDYCAR to compete in the developmental ladder program. He follows an aggressive physical therapy program and drives a specially-equipped racecar that has hand controls. For his impressive career and athletic determination, Johnson received the Spirit Award and was inducted into the Athletes with Disabilities Hall of Fame in 2012.

In the middle of last year, Disabled Sports USA awarded him a scholarship to train with members of the U.S. Paralympics Alpine Skiing National Team. In December of 2014, NASDAQ featured Johnson on the famous NASDAQ Times Square Tower as he became part of their “Ignite Your Ambition” campaign in New York City.

Through his rookie, 2014 season, Johnson finished 13th of 32 entries in the Pro Mazda series. It was part of his move up the Mazda Road to Indy ladder after racing in the Cooper Tires USF2000 Championship powered by Mazda in 2012 and 2013.

“I’m very excited to continue working with JDC Motorsports for the 2015 season in the Pro Mazda Championship presented by Cooper Tires. I have improved so much in winter testing; I have a good feeling about this 2015 season,” Johnson declared. HIs ultimate goal is to race in the Indianapolis 500.

“We are super excited to continue our relationship with Michael and his family,” said JDC Motorsports team owner John Church. “Michael continues to improve his performance each and every time he is in the car and has made huge gains during winter testing. This year should prove to be a great one!”

During this off-season, Michael Johnson has been competing alongside other racing drivers for a lucrative sponsorship from Champion Spark Plugs, a Federal-Mogul brand. There is a national, web-based contest, with the first phase slated to end on February 3rd to weed out the top 15 finalists in Champion’s “Search for a Champion”. The 2015 Pro Mazda season kicks off on the streets of St. Petersburg, Florida the final weekend of March.

Grist signs with Juncos Racing for 2015