Marco Andretti and Ryan Hunter-Reay are angry that gambling on an early switch to slicks in the first race of IndyCar's Detroit Grand Prix double-header was negated when the pits opened under yellow before the field had packed up together. 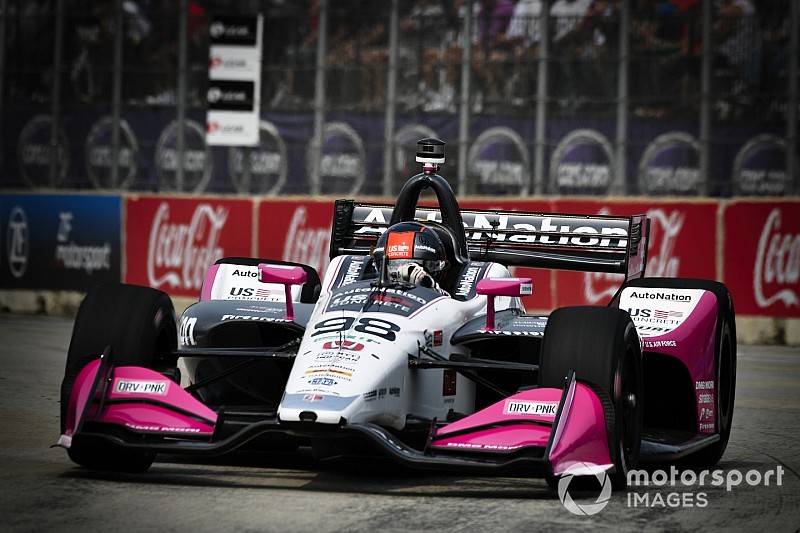 Andretti was the first driver to take the gamble, as early as Lap 13, as a dry line started to emerge around the 2.35-mile Belle Isle course.

By the end of three lurid laps flirting with the concrete walls, he was down to the same pace as the leaders on wets, which prompted his teammates Hunter-Reay and Zach Veach to follow suit, as did Santino Ferrucci of Dale Coyne Racing and Spencer Pigot (Ed Carpenter Racing).

Josef Newgarden, running third and four seconds behind the Rossi vs. Dixon battle at the front, did likewise and reached pitlane just in time before the full-course caution flew for Ed Jones in the other Carpenter car who had slid into a tire barrier.

Standard IndyCar protocol is to have the field pack up before the pits are opened, so that the six who had already stopped under green-flag conditions would stay out and occupy the top six positions, rendering their gamble worthwhile.

However, with IndyCar opening the pits so quickly after the caution flew, the early stoppers gained nothing – except for Newgarden who vaulted into a lead he would never lose.

Andretti, who was left in 20th, said: “We did a great job on strategy and took a big risk. We outsmarted people and kept if off the wall – then they didn’t let us pack up and opened the pits.

"I’ve never seen that in my career. It was tough, I wish we got the reward we deserved.”

He later tweeted: “We got hosed. Was looking good until race control made their own rules, again,” and also tweeted onboard footage from his early laps on slicks in the wet.

Hunter-Reay, who had been suffering a brake issue, should have cycled through to second on the restart behind Newgarden but instead restarted fifth.

He added: “We made a risk and came in early for dry tires, when it was still wet, hoping for a yellow. The yellow came, but we weren’t given the chance to pack up. I have no idea what was happening there with Race Control.”

Veach, who had spun on the final warm-up lap and started the race from the back had made good progress but instead of restarting fourth, he was left in 11th.

An official statement from IndyCar read: “Race Control was reviewing data and closing rates and based off the information the pack-up was developing. The goal was to get the pits open as quickly as possible for the competitors and fans, but given the circumstances that included cars on different tires and a cold track it did not occur as expediently as was envisioned.”

Dixon: We’ve got nothing to lose now, we’ll just go for wins