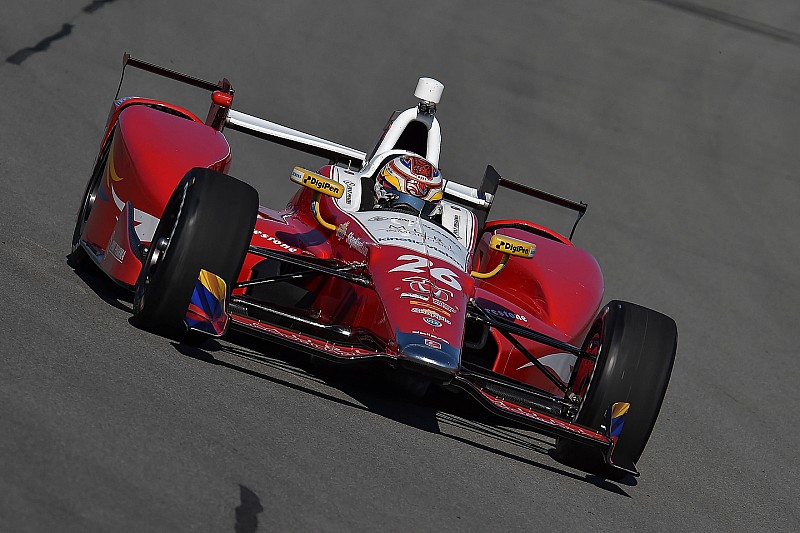 All four Andretti Autosport-Honda drivers believe they can be victory contenders for tomorrow’s ABC Supply 500, despite wildly varying fortunes thus far this weekend.

As at Indianapolis Motor Speedway in May, and Texas  Motor Speedway in June (to be continued), HPD’s superspeedway kit appears to have allowed Honda-powered teams to compete on even terms with the Chevrolet runners this weekend. Five Honda cars have made the top 10 on the grid, and perhaps only the late cloud cover that arrived in time for the runs of Josef Newgarden and Helio Castroneves prevented an HPD lockout of the first two rows.

Carlos Munoz, who took pole at Texas this year, was fastest of the Andretti cars this afternoon at Pocono, his time especially impressive since he went out in the heat of the day, setting a speed of 219.647mph.

He said afterward: ““I wasn’t sure if our run was going to be enough to get the pole, but it was nice to be the second (car) out. You have to wait for the whole field to go, but you get to give information to your teammates. It would be good to be in the front, for sure, but here it is a long race so qualifying (position) is not as important. I think we have a good car all around and I love this place.”

Alexander Rossi, who won the Indy 500 three months ago, lavished praise on Honda, stating: ““The Honda package has really been developed over the winter [and] the results of that are strong and we’re very proud. It seems to be very suited for the speedways. Glad to see Honda hold onto P1.”

Marco Andretti, a former polesitter here at Pocono, tempered his enthusiasm, commenting: “I think in race trim the car is strong, but my car hasn’t had the same speed as, say, my teammates in speedway spec this year – even from Indy.

“But the race is a different story, it’s 500 miles and a lot goes down there.”

Ryan Hunter-Reay will have to start last, having missed qualifying as his new car didn’t get through Tech. His original tub, his 2014 Indy 500 winner, was not repairable following his heavy shunt in morning practice, forcing the Andretti team to build a car around his winning chassis from Pocono last year.

Hunter-Reay said the accident had been caused by being “mechanically a little bit too aggressive,” but pointed out: “This is the  location of our last win, and hopefully we can get this #28 DHL car back into Victory Lane.

“Last year we came from the back as well, hopefully we can make it happen with Justin [Wilson) on our minds the whole way.”

As a mark of respect for the late Briton who died after colliding with flying debris here last August, all team pitstalls have the British flag flying at half mast along the Pocono pitlane. Dale Coyne Racing is also flying a U.S. flag in honor of Bryan Clauson, the sprint car megastar who died less than two weeks ago.