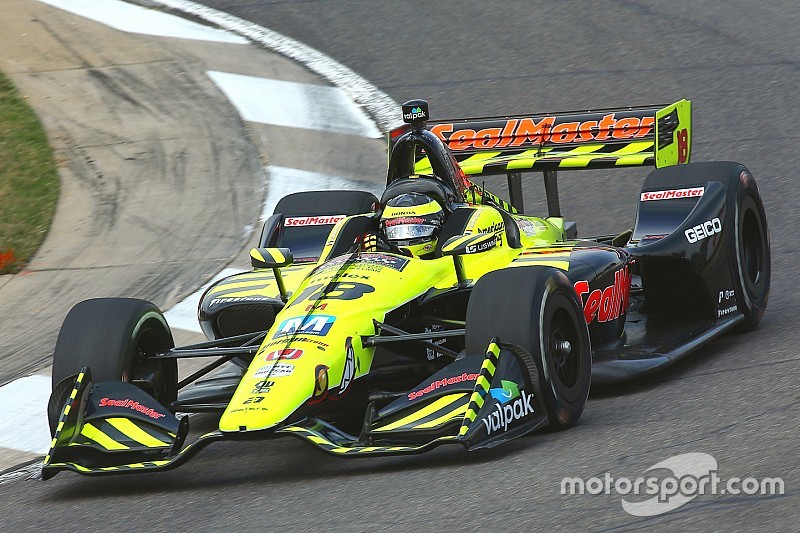 Neither third-placed Sebastien Bourdais, who ran the Honda Indy Grand Prix of Alabama on a rare two-stop strategy, nor runner-up Scott Dixon believe there was any way to beat eventual winner Takuma Sato on Sunday.

Polesitter Sato led 74 of the 90 laps around Barber Motorsports Park, and despite a late-race mistake that saw the Rahal Letterman Lanigan Racing-Honda launch off the track at the Turn 8/9 chicane, his nearest pursuers admit they probably didn’t have the pace to beat him.

Bourdais, who started fifth on a two-stop strategy, said that making the necessary fuel mileage in his Dale Coyne Racing with Vasser-Sullivan Honda wasn’t an issue but he did worry that the tires wouldn’t hold up for 30-lap stints.

He recalled: “By lap 15, 16, I was like, ‘Guys, I am not so sure I can hang on to that car for another 10 laps…’ It was really tricky, and for us to start with the Firestone red [softer alternate compound] used tires already might have been a little bit over-optimistic. But it worked out.

“Hats off to the boys and the SealMaster Honda crew. They obviously had maybe more faith than I had myself to be able to wheel that thing all the way through lap 26 or whatever it was.

"The plan was to hit 29, so when I saw that, I was like, ‘Man, that's going to be a long end of the race and divide that race in one more stop. I wasn't worried about fuel – fuel was not a concern today. It was very easily achievable, but the problem was to be able to hang on to the tires.

“The sun came out, and that was the last thing I needed to go as long as we did and as deep as we did on the stint. As soon as the sun came out every time, it was not consistent, but every time the sun would come out, the temp would go up instantly, and you would lose a half a second a lap.”

Bourdais moved into the lead when his three-stopping rivals pitted for the first time, and when he made his own first stop he came out in second ahead of Dixon. But a longer stop when everyone pitted under caution approaching two-thirds distance, because his tank was nearer empty than his rivals, dropped him behind Dixon.

Although Bourdais had a pace advantage over the Ganassi driver in the final stint – fresh alternate-compound tires and more push-to-pass boost left – he said Dixon’s defense was “played to perfection” and that Sato was never going to be beaten.

Said Bourdais: “I think Sato had us pretty much covered just by the fact that he managed to get himself a very big lead early on and distance himself from the rest of the pack.

"He did that by kind of playing his strengths early and going [with the tire strategy sequence] brand new reds and then new blacks, new blacks. In hindsight, maybe that would have been the right thing to do for us. We had the tires, we just really thought that the option tire was going to be better.

“I wish I would have seen the outcome of the race without the yellow, but I don't know that I would have had anything for Sato because he was just too far up the road for us, and it would turn into, again, track position.”

Five-time and reigning IndyCar champion Dixon concurred with Bourdais verdict on Sato admitting his only hope had been Sato’s brief trip into the Turn 8/9 sand trap.

“I saw it, and I was hoping he went a little further off,” grinned the Ganassi driver, “but it was his race today. He deserved it. That was the only thing he did wrong, and he caught it.

“We tried to put pressure on him. It was actually quite tough to get close this year, and I think that's because the grip level was quite low, so it was really hard to get close. In that situation when I pressured him, my tires went off.

“Bourdais really charged with about 10 to go and then he made another run with a couple to go. He had a lot of [push-to-pass] left and he nearly had us. It was definitely a nail-biting situation for the #9 car there.”