Tony Kanaan: "So far, it has been a frustrating weekend..."

TK Sat Sonoma Kanaan, who pilots the No. 11 Hydroxycut - KV Racing Technology - SH Racing machine, went out in in Group Two in Round One and posted a lap of 78.3318 seconds placing him eighth in his group. 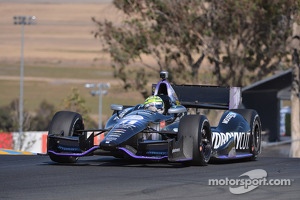 He therefore did not advance into Round Two and will start on row eight in the 16th position. When Kanaan takes the green flag tomorrow he will tie KVRT co-owner Jimmy Vasser for the series record for consecutive starts with 211.

"So far, it has been a frustrating weekend," Kanaan said. "We've made a lot of changes to the car and it is definitely improved from this morning, but we are still chasing the setup. We have to keep working and hope that we can come up with a strategy that will help us gain some track position during the race."

Sim Sat Sonoma De Silvestro, behind the wheel of the No. 78 Nuclear Clean Air Energy - KV Racing Technology car, went out in Group One in Round One and recorded a lap of 79.5298 seconds puttingher 12th on the speed charts in her group, so she did not advance. De Silvestro will grid 23rd on row 12.

Commenting on her session De Silverstro said," I'm pretty disappointed. We had an ok car in practice, but then I think we tried to be a little bit too aggressive for qualifying and that kind of through us off a bit. We're starting way back which is really annoying. We're going to have to do a lot of work during the race tomorrow, but we'll see."

The 38-year-old Brazilian has finished in the top-10 six times in his previous eight starts in Sonoma including a victory in 2005.He is currently 10th in the championship standings with 313 points on the strength of six top-10 finishes including five top-five showings, three podiums and an extremely popular victory at the 2013 Indianapolis 500.

De Silvestro, making her third appearance in Sonoma, has a best starting position of 11th and a best finish of 13th both in 2010. The 24-year-old Swiss driver has qualified in the top-10 five times this season, four times on road/street circuits plus an oval career-high ninth at Pocono.

Herbest qualifying this season was her IndyCar career-high starting position of third at St. Petersburg.De Silvestro has placed in the top-10 four times this year including a season-high sixthat St. Petersburg. She is looking to continue a string of solid results which has seen her finish her last four races with an oval career-high 11th at Pocono, 10th and 14th in Toronto, and 11th in Mid-Ohio.

The GoPro Grand Prix of Sonoma will be broadcast live on NBC starting at 4:00 p.m. ET.