Tony Kanaan: "We had a good race going, and I was set for a fifth-place finish until Servia took me out with less than two laps to go."

Long Beach, Calif. - With both KV Racing Technology cars poised to finish in the top-ten, Oriol Servia made contact with Tony Kanaan knocking him out of 5th place with only two laps to go.

Kanaan was driving a great race in the No. 11 HYDROXYCUT - KV Racing Technology - SH Racing Chevrolet/Firestone car and was poised for his second top-five finish of the season after starting the season with a fourth-place finish in St. Petersburg. 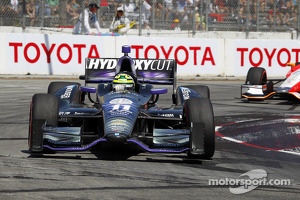 While Kanaan didn't have the result he was looking for, Simona De Silvestro, driver of the No. 78 Nuclear Clean Air Energy car, had a great result moving up ten positions from her starting spot of 19th on the grid to finish in 9th place.

It looked like it was going to be another disappointing day for De Silvestro when she made contact in the opening laps with Sebastian Saavedra damaging her front wing.

The crew was able to replace the wing during a pit stop while under yellow flag on lap 4, but the unexpected stop dropped the Swiss driver to 24th.

De Silvestro slowly worked her way back through the field and was able to push hard an extra couple of laps past when most of the other competitors made their stops, catching a break when a yellow flag came out again.

Her crew performed a great pit stop, getting her back out in 15th and enabling her to get back on the same strategy as the race leaders.

"I think it was a good recovery from where we started," De Silvestro said. "The car was really fast and the guys did a really awesome job in the pits.

When we had clean laps we could move forward and made up some positions, so I think P9 is really good for us. Hopefully next time we can start a little more up front and make life a little bit easier. But, I think it was a great weekend for us."

Team manager, Steve Moore, was pleased with the job De Silvestro and her crew did in today's race. "It was a great day for the 78 car," he said.

"Simona drove a great race, moving up from P19 to finish inside the top-ten; good result, great drive from her, good result from the team, great pit stops all day, and a good strategy. Ending the race with in the top-ten was a great result."

"Tony was driving a great race and the crew was doing a good job, moving up from a great starting position of eight to inside the top-five, but unfortunately getting taken out at the end of the race.

It was a very disappointing end of to the race. But, he obviously showed great pace and we'll take that with us as we move on to Brazil."

Kanaan was obviously disappointed as well with the finish. "We had a good race going," he said, "and I was set for a fifth-place finish until Servia took me out with less than two laps to go.

It's really frustrating... I was the leading Chevy car out there and it was looking like a good points race for us. I'm really disappointed on how it turned out."

Jimmy Vasser, team co-owner, wasn't happy with the final result on the No. 11 HYDROXYCUT - KV Racing Technology - SH Racing Chevrolet/Firestone either, but was pleased with De Silvestro's performance in the No. 78 Nuclear Clean Air Energy car.

"I'm really disappointed with Tony falling out with two (laps) to go," he said. "We had a solid top-five and two cars in the top-ten. I'm really, really happy and proud of the way Simona drove today. To put the car up in the top-ten from where she started was a sign of great things to come."

KV Racing Technology finishes round 3 of the 2013 IZOD IndyCar Series with De Silvestro 9th in points while Kanaan drops to 12th. The team heads home to Indianapolis tonight to begin preparations for their trip to Brazil.

Make sure to tune in to the Itaipava Sao Paulo Indy 300 and catch both KV Racing drivers in action as they try to move up the point's ladder. The race airs on NBC Sports Network and on the IndyCar Radio Network (on Sirius XM Channel 211) beginning at 11:00 a.m. ET on May 5th.

The streets of Long Beach leave SFHR longing for more

Brad Jones opens up on survival in Supercars