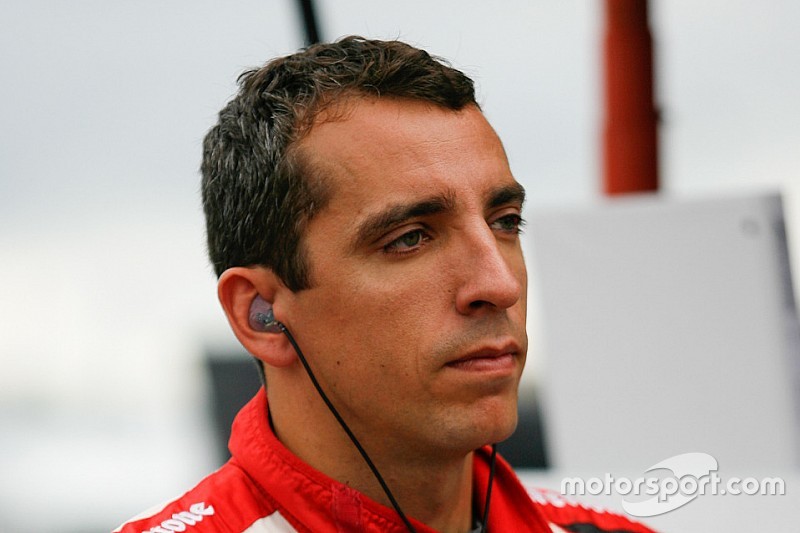 As the second annual Wilson Children’s Fund auction approaches its final stages, Justin’s wife Julia thanks the racing community and fans for keeping her husband’s name alive, and updates us on how their daughters are toughing it out.

Prints of the 2017 Indy 500 signed by all 33 starters and other famous IndyCar legends are still available via email bidding, until 12 noon U.S. Central Time on Friday. Full details are below.

It goes without saying that Julia, wife of Justin and devoted mother of their daughters Jane and Jessica, has had a grueling 30 months since the seven-time IndyCar race winner and 2001 Formula 3000 champion perished in a freak accident at Pocono Raceway. However, Julia’s upbeat manner and determination have helped pull her and the family through the worst of the grief, and she jumped at the chance to tell the racing community how important their support has been since Aug. 24, 2015, and to give us an update on Jane and Jessica.

First, I want to take this opportunity to say a huge thank you to everyone involved in this second WCF auction, especially Marshall Pruett and Paul Zimmerman, who have again made time and effort for the benefit of Jane and Jess. I also want to thank all of Justin’s friends and rivals, and all the legends who have signed the print. It’s quite amazing.

I want to thank all those who regularly check in, including DM, who has now invited me to write you all an update on life after Justin. I am overwhelmed by all the love and support we still receive from the racing community and beyond. It’s one of those sports that quickly moves on, so it truly amazes me every day how big your hearts are and how loved Justin was and still is.

I confess that it took me well over a year, maybe 18 months, before I could read the obituaries, tributes and fan comments. I know I still wouldn’t be able to without bawling.

So… two-and-a-half years on, we are doing well, considering. We all suffer bad days and I believe this will be life now, but the really bad days become fewer. Time is the key in any tragic circumstance, and I’ve learned not to expect a cure, just a fix. You never can accept the unacceptable, you just learn to deal with it. Keeping busy works for us all. We talk about Justin everyday and miss him tons, but we choose to move forward because that’s what he would have done and wanted.

Being young, the girls think and deal with this in a completely different way. They have some desperately sad moments, but they show their inner strength by not dwelling on it. Watching them grow up without a Dad the last couple of years has been a tough experience, for sure. Right from the start I got help from a counselor as I really didn’t know how to deal with my own sudden grief, let alone the best way to help a 5-year-old and a 7-year-old going through the same process. They don’t always like the counseling, but it’s actually been an immense help.

The girls’ school staff and parents were like a family to us, opened up their arms and supported us through the toughest times. Being a smaller school, they were really able to give Jane and Jess the attention they needed. I couldn’t have asked for better teachers and friends. We are also extremely lucky as Stefan and his wife Katie have moved to Colorado to be closer to us. It’s so nice to have family near, but of course Justin’s parents and my parents also do everything they can to support us, too.

Jane is now nearly 10 and has turned into a beautiful, clever, shy but also confident girl – a quiet achiever, just like her Dad. She never gives up, but also never makes much fuss. Jane unfortunately had to grow up quickly, and is fully aware of how cruel and painful life can be. She always tries to be happy and helpful towards others, but also tends to keeps it all in and tries to work things out by herself… which doesn’t always work, and so we deal with each emotion as it comes to a head. She is into horse-riding and tennis, loves reading and art. She makes us proud every day and I know this one will reach for the stars every time she wants something.

Jess is eight and keeps us on our toes. Being slightly dyslexic like her Dad, she struggles a little but loves school and is doing really well. She has extra help with reading and is now back on track. She works very hard and is one of those kids who is constantly on the move, climbing up a tree or walking along a high-rise wall. She loves horse-riding, like Jane, but will also try anything with wheels on – she loves speed!

After the accident, Jess was initially all anger – even now she gets angry about things and finds life unfair at times. She just can’t understand why her best friend won’t come back, or why he went in the first place – and she’s very, very vocal about it! But she’s also cheeky, loving, and possesses a big heart. Jessica makes us laugh every day.

So that’s how things are, and I appreciate this opportunity to let everyone know, and to again, thank you all. You people are proof that the racing world really is a community.

Jane, Jess and I will be at the Indianapolis 500 again this year to cheer on Stef as he makes his second start in the biggest race in the world. I’m really excited for him, and we all know how proud Justin would be of his ‘little’ bro.

Again, thank you all so much.

How to bid for prints for the Wilson Children’s Fund

Prints of the 2017 Indy 500 signed by all 33 starters and other famous Indy legends are still available via email bid until 12 noon Central Time on Friday.

The 20” x 30” image shows the start of the Indianapolis 500, as taken by renowned North American media figure Marshall Pruett and have been processed and printed by Paul Zimmermann.

The 10 copies of the print have been signed by all 33 starters – including Fernando Alonso – but other famous signatories include AJ Foyt, Roger Penske, Rick Mears, Mario Andretti, Dario Franchitti, Bobby Rahal and the late great Dan Gurney.

Other names who have signed the print include IMS president Doug Boles, and Justin’s brother Stefan Wilson – who effectively gave up his Andretti Autosport-Honda ride for the 101st running of the Indy 500 in order to make way for Alonso. A particularly poignant signatory, other than Gurney, is Sebastien Bourdais who failed to make the start of the race due to an injury incurred in his huge shunt in practice. Bourdais and Justin Wilson had great mutual respect for each other, having fought many battles both in Formula 3000 in Europe and Champ Car and IndyCar across North America.

Email your bids to Paul@MotorsportCollector.com advancements in $100.00 (or higher) increments will be accepted via email only.

The 10 highest bidders will be notified via email by the close of business Friday, March 16, 2018.

Payment directly to the Wilson Children's Fund via PayPal .

Once payment has been confirmed, your photo will be shipped, fully insured, courtesy of The Motorsport Collector.