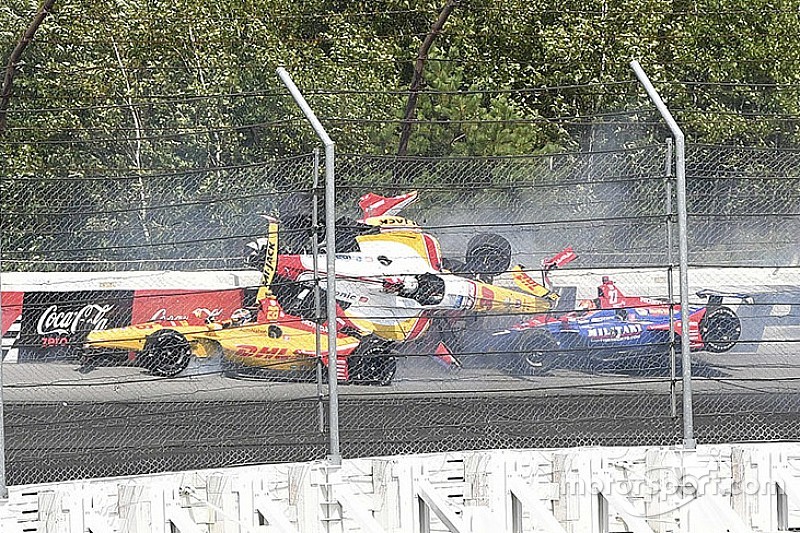 Andretti Autosport’s Alexander Rossi and Rahal Letterman Lanigan Racing’s Takuma Sato remain at odds over who’s to blame for the five-car shunt on Lap 1 of the ABC Supply 500 at Pocono Raceway.

Sato and Rossi’s teammate Ryan Hunter-Reay were taking advantage of a slightly tardy getaway by front-row starter Rossi as they headed down to Turn 2. Hunter-Reay flicked to the inside line, while Sato moved to the right of Rossi so they ran three-abreast.

Then Sato appeared to pinch down on Rossi long before he was clear of the championship contender and defending Pocono race winner, pushing Rossi into Hunter-Reay.

As the trio came together, and slid up toward the outside wall, the closely following James Hinchcliffe was left with nowhere to go and shunted his Arrow Schmidt Peterson Motorsports machine, while Felix Rosenqvist’s Chip Ganassi Racing-Honda was clipped hard by the wreckage and sent up into the fence and along the wall.

The Swede was taken to hospital by ambulance but was later cleared and released.

On examining the onboard footage from Rossi’s car, fellow Indy 500 winner Sato took to Twitter with a series of screenshots explaining that he felt Rossi moved up the track into him.

“I feel I need to say a word,” he wrote. “I’m sorry I was involved with @AlexanderRossi for the championship. Looks like he was squeezed both Ryan and I [sic], and if you reference seams, Alex clearly moved up. We all racing very close and unfortunately we made contact.”

Rossi replied, “I think you’ll find that if you watch the video, it was you moving down trying to get ole Scotty D [Scott Dixon]’s tow which caused this whole situation.”

Indy 500 regular Sage Karam backed Rossi’s version of events, replying to him: “Your hands don’t move a single degree in all of his screenshots. You’re in the clear.”

UPDATE: Sato subsequently posted on-board footage of the crash from his Rahal Letterman Lanigan Racing car's perspective, in which he says he "just drove straight".