Rubens Barrichello arrived in INDYCAR amid many comparisons to Nigel Mansell, the last “big name” Formula 1 driver to compete in an IndyCar event. Those comparisons set a high level of expectations for Barrichello; many thought he’d be an immediate contender for podiums, if not outright victories, especially because of the road/street-course heavy 2012 schedule.

However, there are numerous aspects that should have tempered expectations. When Mansell joined the IndyCar ranks in 1993, he did so with the powerhouse Newman-Haas team, then the King Kong of the IndyCar paddock. Evidenced Michael Andretti 1991 CART championship and near miss at the Indy 500 in ’92, Mansell was joining the established gold standard. Though he would be contesting new and unfamiliar tracks, competing with probably the best IndyCar team of the time undoubtedly provided a big bonus. 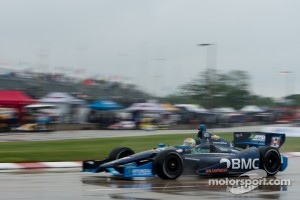 Barrichello, meanwhile, joined a KV Racing Technology team that has never won a championship, not in CART, Champ Car, or INDYCAR. Further, their last victory, and only victory at that, came at Portland in 2005 (Cristiano da Matta was the driver) and have not visited victory lane since the INDYCAR/Champ Car merger.

Plus, Barrichello had to adapt to IndyCar strategy, chiefly fuel strategy. While fuel is often used as a tool to keep a car’s weight down in Formula 1, IndyCar teams use fuel strategy to potentially make fewer pit stops, requiring a driver be very adept at managing and “making” fuel, a new game for the F1 veteran. Factor in that Barrichello would, like Mansell, contest tracks he had never been to before, and there were many obstacles impeding him from being an immediate contender.

All of those obstacles were in play at the season opener in St. Pete. On a new track, Barrichello was never near the top of the time sheets, qualifying 13th and finishing 17th after he struggled to manage fuel and ultimately ran out when his fuel gauge was not reading properly. Still, he acknowledged the challenge he faced and vowed to learn from it. “I had fun out there,” he said post-race. “Unfortunately we had a meter reading problem so I ran out of fuel at the end. However, I enjoyed the race and dicing with other cars, but would have liked to have been able to push more. It has been a good learning curve this weekend and I look forward to being back in the car in a few days for the next race.” 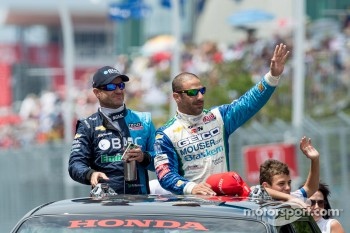 A quick learner, Barrichello put together finishes of eighth, ninth, and tenth at the next three races (Barber, Long Beach, and Sao Paulo), showing he still possesses all the talent that made him an 11-time Grand Prix winner. After Long Beach, Barrichello’s enthusiasm about his improvement was obvious, especially considering he had to contend with his fair share of contact that day. “I was hit on every side of my car,” he quipped afterward. “Apart from that, I enjoyed myself today. To start so far back and finish in the top-10 again shows I am getting better and better.”

His oval prowess has also been stout. Barrichello ran in the top five for much of the day at Milwaukee before finishing tenth, and followed it up with a solid seventh-place finish at Iowa. “I must say I am happy with this seventh place finish,” Barrichello said after June’s Iowa Corn Indy 205. “I started the race on a completely different set up and for two stints my car was pretty loose. We managed not to lose a lap and once the car got better after the changes we made in the first two pit stops I was able to race. It's still such a different experience on ovals, but like I said, I am pleased with the result.” Couple those finishes with an 11th-place run and Rookie of the Year Honors at Indianapolis, and his initial ovals races have been a pleasant surprise.

On the surface, with Barrichello mired back in 17th in the championship, the season has been a disappointment. But, if you acknowledged the uphill climb he faces, the season has actually been relatively solid.

If you want to give Barrichello’s year a grade, I think a B- would be a fair assessment. While he hasn’t yet lit the grid alight with barn-burning drivers to victory, his races have been mistake-free (his lone DNF’s at Texas and Detroit resulting from mechanical failures) and he has steadily improved with every outing, gaining much needed experience and solid results in the process.

Can he reach the podium in his debut season? The unpredictable nature of 2012 says it’s possible, but it should not be expected. There are simply too many hurdles in the way, but raising expectations for 2013 isn’t out of the question, assuming he returns.

For now, though, Barrichello needs to stay the course.