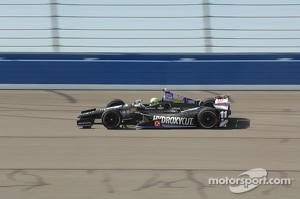 Kanaan qualified 12th but started ninth after penalties were accessed for unauthorized engine changes. He spent the majority of the race in the top-five and dropped out of the top-10 only twice over the 250-lap contest. The credit for the podium finish has to be shared. Kanaan demonstrated both his tremendous driving skill and race craft throughout the entire event, but equally as important was the work of the engineering staff and crew who constantly made adjustments, eventually giving Kanaan a car that could challenge but not quite up to the task of taking the victory.

"It was a hard race," Kanaan said. "I had a couple of scary moments out there, but the engineers made adjustments almost every stop and the guys did a great job in the pits. In the end, we just didn't have enough to win. It was a great feeling to give the team a podium finish in our last race."

Commenting on his last race with the team, Kanaan said, "I want to thank everyone at KV Racing Technology for three great years. From signing five days before the 2011 season, to the podium finish in our first race, to winning the Indy 500, it has been a great journey, something I will remember for the rest of my life. I want to thank Jimmy Vasser and Kevin Kalkhoven for the opportunity, the entire team for their support and to my engineers and crew, it has been an honor racing with you. I also want to thank the sponsors without all of you none of this would have been possible." 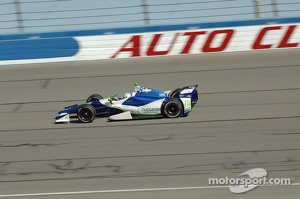 De Silvestro, in the No. 78 Nuclear Clean Air Energy - KV Racing Technology machine, qualified 21st, but started 16th after the penalties. She basically held station through the first 100 plus laps. Shortly thereafter, she was collected in an incident involving several cars. After pitting for repairs, De Silvestro returned to action three laps down, but from that point on showed her determination and grit by fighting her way steadily through the field. She stayed the course and drove smart, especially over the final 50 laps, when she showed how much she has improved as an oval competitor by making her way solidly into the top-10 for the second consecutive oval event.

"I'm pretty happy with our eight place finish," De Silvestro said. "I hope Justin is okay. I looked over and he seemed to be moving so I hope he's doing ok. We kind of got tangled in the accident and had nowhere to go and spun out. Luckily I managed to not damage the car that much; I think some of the tow-links were a little bit bent so it felt a little bit funny. But, we stayed out there and people kept falling off. I'm pretty happy, but I think it was one of the longest races I've ever done. Big thanks to the team. I feel like in the last few races we've really worked in the right direction and that was a lot of fun. I also want to thank my Nuclear Clean Air Energy sponsors Entergy and AREVA for all their support. I'm really happy that we were able to finish the season on such a strong note."

Kanaan has now finished in the top-10 seven times in 10 starts in Fontana with a best showing of second in 2004 and 2006. The 38-year-old Brazilian earned 36 points today and finished 11th in the 2013 IZOD IndyCar Series championship standings with 397points. Kanaan scored seven top-10 finishes this year including six top-five showings, four podiums and an extremely popular victory at the 2013 Indianapolis 500.

De Silvestro made her second appearance in Fontana. Today's eighth place finish is a huge improvement from her Fontana debut last year when she was hampered by a Lotus engine and finished 26th. The 25-year-from Switzerland earned 24 points today and finished the 2013 season, which was filled with career marks, a career-high 13th in the championship standings with 362 points. De Silvestro scored 10 top-10 finishes this year (a career-high) including two top-five finishes (career-high) and her first career podium, a second at Houston (Race 1). In her last nine events she has put together a remarkable streak of results including two 11ths,six top-10 finishes including two top-five performances that has saw her jump six places in the standings. She also earned her first two top-10 finishes on an oval placing ninth at Pocono to go with today's eighth.