Analysis: The other Italian who could spoil Rossi's party 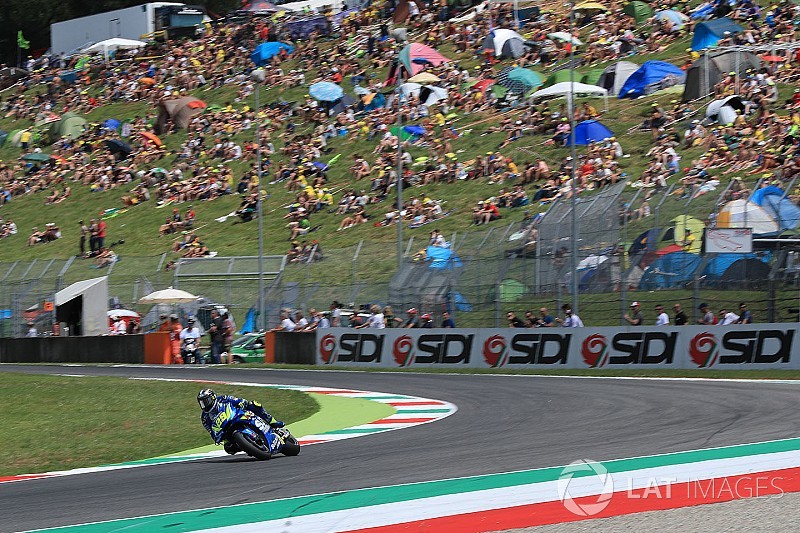 Valentino Rossi scored a popular pole position in front of his adoring public at Mugello - but it's another Italian rider who will begin his home race as marginal favourite, as Jamie Klein explains.

Rossi, 39, rolled back the years on Saturday with the fastest-ever lap on two wheels around his home track - although it should be noted that the previous record before the start of this weekend, established by Andrea Iannone in 2015, was beaten by all six of the lead runners in Q2.

But pulling a fast lap out of the bag at the end of a pole position shootout is one thing, pace over 23 laps is quite another. And in that regard, Rossi didn't exactly ooze confidence about his prospects of a first win since last year's Assen race.

"Looking at the pace, unfortunately is more on [1m]47s than 48s, because a lot of riders are fast," conceded the Yamaha rider in the post-qualifying press conference.

"I think the first seven can win, can fight for the victory, because [we] have a lot of different bikes and different riders that have a great pace."

Rossi's FP4 pace certainly wasn't much to write about compared to his immediate rivals. Using a new hard front tyre and a four-lap old soft rear, he was only able to breach the 1m48s barrier twice over a six-lap run, with his best lap being a 1m47.856s.

Contrast that to Suzuki man Iannone, who did three consecutive laps in the 1m47.5s bracket in the same session, using a four-lap old front and an eight-lap old rear. 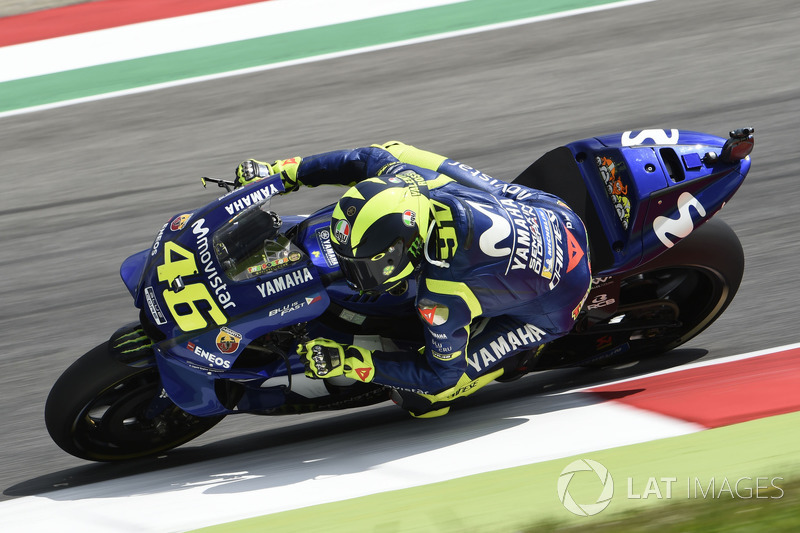 Of the other riders in the top seven on the grid, the only one with broadly comparable pace was Jorge Lorenzo, who was second only to Rossi in qualifying, missing out on a first pole since he joined Ducati by just 0.035 seconds.

During FP4, the Spaniard pumped in three laps in a row between the 1m47.6-47.8s range, and another one just below the 1m48s. But that was with a new front tyre and a four-lap old rear.

Only Maverick Vinales, who lines up third, used similar age tyres to Iannone, opting for a six lap-old hard front and a 10-lap old medium rear. But just one of his laps on that tyre was below 1m48s.

Conditions were more favourable for long runs in the morning than in the afternoon, when track temperatures rose to a sizzling 48 degrees celsius in time for FP4. But few other front-runners attempted times on older rubber, and those that did were slower than Iannone.

Marc Marquez - a lowly (by his standards) sixth on the grid - was one that did, the Honda rider equipping a 12-lap old medium/soft tyre combination. But again, he managed only two laps beneath the 1m48s mark, exactly the same as he did in FP4 on newer Michelins.

Small wonder then that Marquez remarked: "The only one that is a little bit faster than everybody is Iannone. The rest, we are very equal." 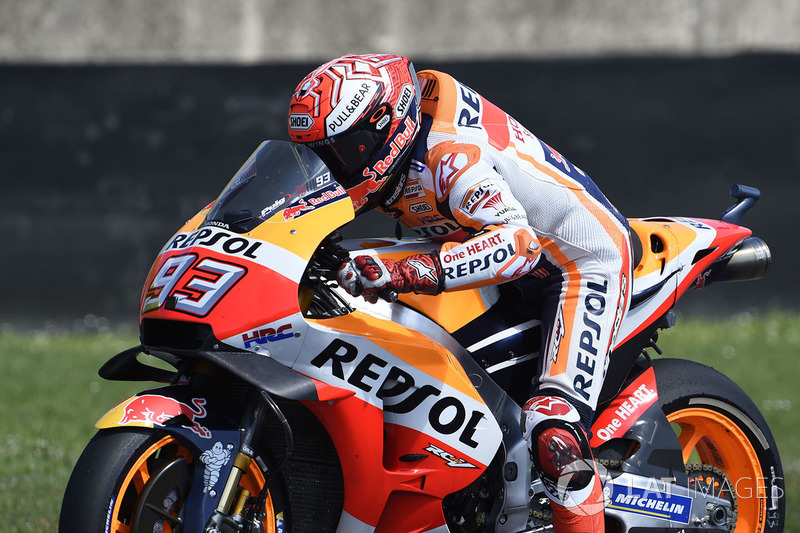 So, is a second MotoGP race win for Iannone and a first in Suzuki colours a sure thing?

Well, for starters, the Italian - who, incidentally, confirmed ahead of the weekend he won't be riding for Suzuki next year - will have to battle his way up from fourth on the grid after failing to hook up the perfect lap in qualifying.

If he had made that time, he would have beaten Rossi to pole by a tenth. But instead he faces having to battle his way past two Yamahas and a Ducati to hit the front, while losing out on the straights.

"On the straight we lose on the top speed, we lose [all the time gained in the corners] and it's a really bad situation, especially when you have five Ducatis on your back," he admitted.

"On the first and second lap, for the other riders it will be easy to overtake me because on the straight I'm slower than everybody." 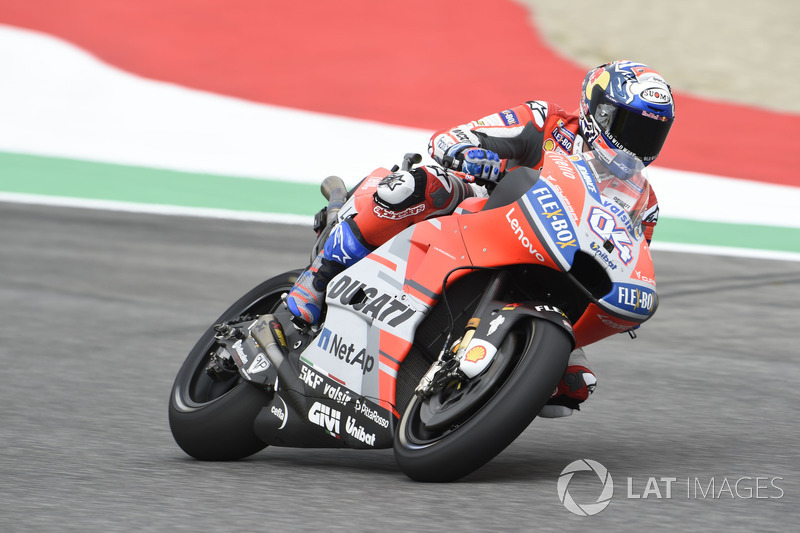 The Suzuki has never been famed for its horsepower, and in the speed traps Iannone was losing in the order of 6km/h on the straights to former teammate Andrea Dovizioso during qualifying.

But what the GSX-RR loses in a straight line, it tends to make up in the corners - especially when there are plenty of medium-speed sweepers and fast changes of directions, like there are at Mugello.

Iannone's chances could therefore depend on a good start, and not getting stuck behind other riders in the corners in the early laps who can then just rely on their straight line speed to stay ahead.

Immediately behind Iannone on the grid is Pramac Ducati rider Danilo Petrucci, whose pace in FP4 was consistent but not especially fast, but the bigger threat from behind will probably come from Dovizioso, who did a 1m48.2s with a positively ancient rear tyre in FP4.

"When you have the pace we did in free practice four, you have to be happy," said Dovizioso. "I was third [fastest] and I was able to keep a good laptime until the end when the tyre was very used."

Whether Iannone will be able to similarly look after his tyres is tough to judge, as his he didn't do a run of more than three flying laps in either FP3 or FP4.

But it's not for nothing that he's been marked out as the favourite by no lesser rival than Marquez, and with Suzuki dispensing of his services after this season he's a rider with something to prove, particularly in front of his home crowd.

Watching him go for glory on Sunday will certainly be worth tuning in for, whatever happens. 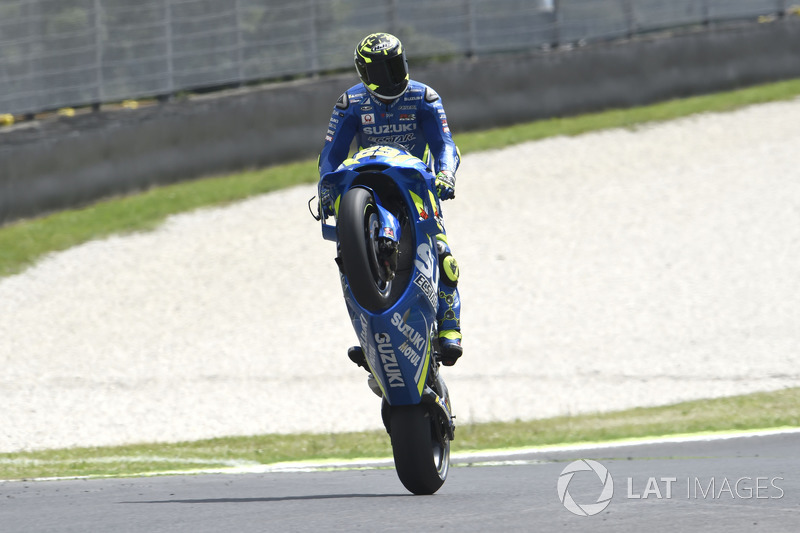