Aprilia wants to fight for podium in "most races" in 2020 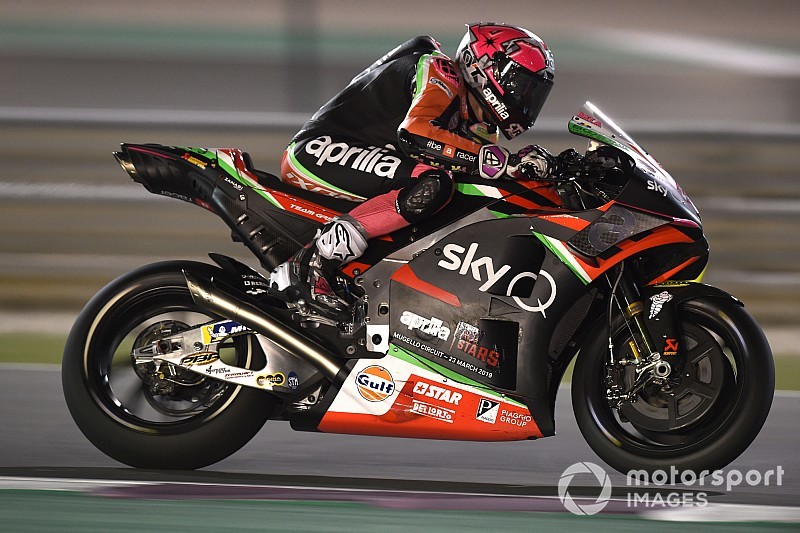 The Aprilia MotoGP team should aim to fight for podiums “in most races” next year, according to its tech chief Romano Albesiano.

Aprilia is the only premier-class works team not to have scored a top-three result in the MotoGP era, its best result with the RS-GP since its 2015 return having been a pair of sixth-place finishes.

Riders Aleix Espargaro and Andrea Iannone were 10th and 14th respectively in the recent 2019 season opener in Qatar, although Espargaro was less than 10 seconds behind race winner Andrea Dovizioso.

Albesiano, who was handed a more specialised engineering role following the arrival of Massimo Rivola as Aprilia's racing department CEO, believes the Italian manufacturer could be on the verge of a breakthrough – and that its off-season additions will contribute to its progress.

“The average level of MotoGP is increasing year by year and the positive thing is that we reduced the gap from the front guys,” Albesiano said at a recent Aprilia All Stars special event at Mugello,

“Technically I'm happy. We are, let's say, on schedule on our programme and we are much stronger than the previous years.

“All the activity of the race department is focused on MotoGP, so we are taking the best, we are a better team in the garage, with two fantastic riders and a super strong test team with a fantastic rider there, Bradley [Smith]. I think it's the strongest Aprilia ever.

“Massimo has come, he's bringing a new era in the department, a new strength, enthusiasm. And me for it's fantastic because I can really do my job, what I really love. Day by day I go to my office with the right spirit.

“We have a lot of ideas, a lot of things to develop - we have more ideas than people to develop them.

“The result we want to achieve - I think for the next year we have to be ready for fighting for podium in most of the races.

“This is our target, I believe so. It's super-challenging but I think we have the possibility to do this.”

Rivola, for his part, said he wanted newcomer Iannone – who had joined the two team chiefs at the Mugello event – to score a podium this year already, and to do so “not because everybody in front fell off, but because the bike is there and the performance was good”.

The new CEO, who spent over two decades in Formula 1 working for Ferrari and other Italian teams in that paddock, said he felt “a big responsibility” to add to Aprilia's storied premier-class history.

“We have 54 titles on our back [38 of them in grand prix racing], and I would love to bring the 55th as soon as possible.

“I know this is ambitious, a lot. [But] I know that if you are not ambitious, you never reach where you want to be. So I like to be ambitious.

“I know it takes time, I know we need to grow in many areas.