Dovizioso: Lack of speed, not error, to blame for poor finish 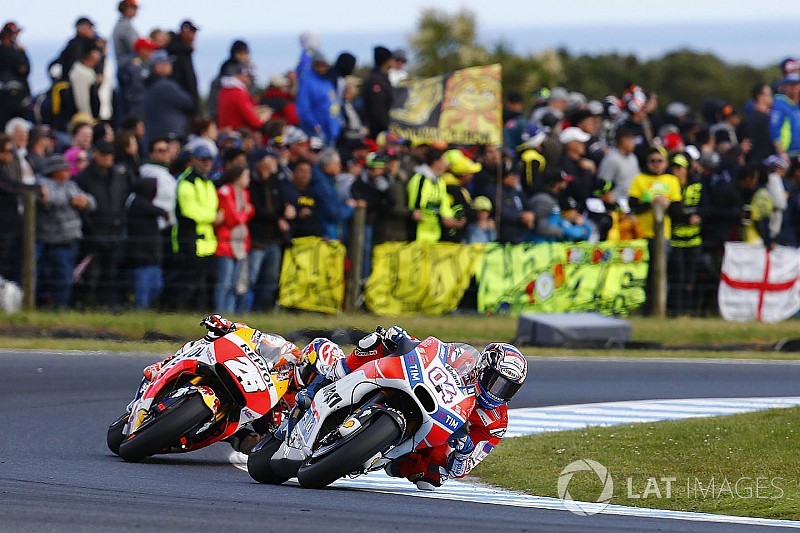 Andrea Dovizioso says a lack of speed on his Ducati, not his early error, was the worst thing about his potentially championship-defining run to 13th at Phillip Island.

Starting from 11th, Dovizioso’s race took an early turn for the worse when he ran wide at Turn 1 at the start of the second lap, plummeting to 20th place.

The Italian managed to recover to his starting position over the course of the subsequent laps, but was unable to shake off Dani Pedrosa and Scott Redding, who both passed him on the drag to the finish line.

It means Dovizioso, who arrived in Australia only 11 points adrift of race winner Marc Marquez, now lies 33 points behind with just two races at Sepang and Valencia left to run this year.

“Very bad result for sure, especially for the championship,” lamented the 31-year-old. “For sure my mistake on the second lap created a bad situation. But the reality is not that. The reality is we weren’t fast.

“The characteristic of this track is to have good turning [ability], we confirm we still have that limit. We finished the tyres eight laps to the end, but all that is a consequence [of poor turning].

“We did really good races this year at tracks where we weren’t fast in the past, but this track has a particular characteristic and the turning is so important.

“But anyway, we want to think positive for the remaining two races. We know fighting for the championship will be very difficult, but fortunately in this sport it can happen.”

Asked where he might have finished without the second-lap error, Dovizioso replied: “Hard to be sure, ahead of the KTMs [in ninth and 10th]. Maybe [Alex] Rins [eighth]. But not more.”

Pramac rider Redding was best of the Ducati finishers in 11th place, but Dovizioso said he was not unhappy about another member of the Italian marque’s stable beating him.

“No, he’s doing his race,” Dovizioso said when asked if he was annoyed at Redding taking points off him. “It was embarrassing about my traction.

“He had a better traction at the end and I tried to close all the doors until the last corner. But at the exit of the corner I was so slow, both riders [Redding and Pedrosa] take me."

Zarco: “No way to be disappointed” with fourth at Phillip Island