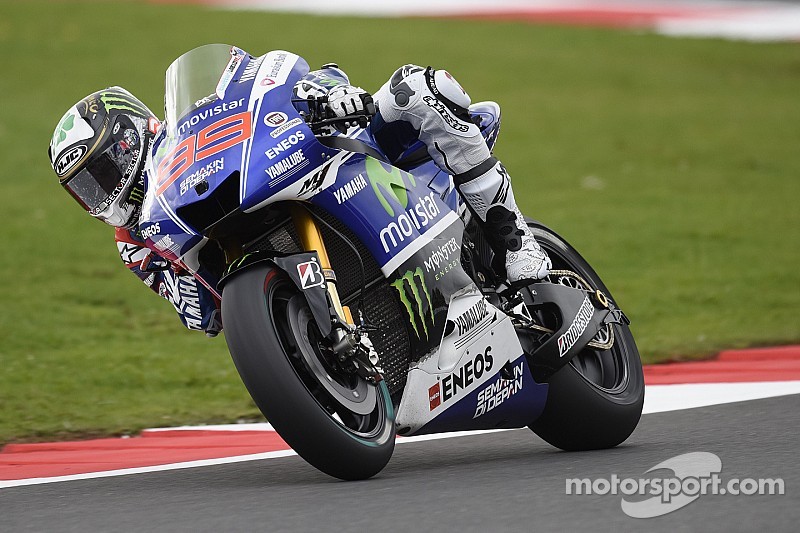 Lorenzo was clearly eager to start the session as the first rider to line up at the pit line exit for the overcast 15-minute session. His first hot lap was a 2’01.798 followed by a 2’01.771 that was good for provisional second place. With six and half minutes left Lorenzo then returned to the pits for a fresh rear tyre.

Returning quickly to the track, the Spaniard dropped a time of 2’01.175 to secure provisional pole position until his rivals' last minute hot laps pushed him to third at the end.

Teammate Rossi wasted no time at the start of the session to put in his first flying lap. The nine time world champion soon dropped under the 2’02 mark with a 2’01.893, after which he immediately returned to the pits. With just over five minutes remaining he was back on track to pick up the pace and delivered a 2’01.550. The time was good enough to secure the second row in sixth place.

Jorge Lorenzo 3rd / 2'01.175 / 7 laps: “I’m very satisfied and very proud of my lap time. I pushed to the limit and I improved six tenths of a second on the last lap compared to my first try. The soft tyre on the front is much better for our bike. I would like to use it tomorrow, but it will be a long race, so we have to improve the bike a little bit more during the warm-up to be more comfortable with the harder tyres. This year the engine and the clutch are different.

I don’t have the same feeling, making it difficult to make similar starts to last year. Starting from third place of the grid is not the best position, because you are too much on the inside for the first corner, but it is still better to be on the first row than to be on the second. It’s a good position. Let’s try to improve the bike for tomorrow and try to stay with the front group during the race.”

Valentino Rossi 6th / 2'01.550 / 7 laps: “I’m a lot less worried and more satisfied about today, because in both practice sessions we were more competitive and we can fight for top positions. We made good progress with the bike compared to yesterday. Unfortunately I’m not 100% happy about my qualifying, because I could do better. I could have had a little bit more potential to stay at the front, but starting from the second row is not a disaster.

It’s good for the race. We have to fix some small problems that I have under braking and corner entry and try to improve for tomorrow. Yesterday we didn’t balance the bike well and I had big troubles with the front tyre, so when I entered the corner I suffered a lot with all the bumps. This circuit has a lot of them, but today the team improved the set up and the balance a lot and we improved the lap times a lot too.”

Massimo Meregalli - Movistar Yamaha MotoGP Team Director: “Considering the issues we were having yesterday we are satisfied to be on the first and second row. The team worked very hard overnight to find solutions to Friday's issues and we were able to give both Jorge and Vale a more competitive package today. They've also made it count this afternoon and put in a great effort to secure the grid positions. There are two or three good hard braking points were there are overtaking possibilities so we have the potential to have a good race. For sure we still have the opportunity to improve the set up further so we will work to find an extra step for the morning warm up.”

British star Bradley Smith delivered a strong qualifying performance in front of his home fans to seize seventh position on the grid for tomorrow’s MotoGP race at Silverstone. The Monster Yamaha Tech3 rider continued his positive form from yesterday and began today by completing the FP3 session in eighth position with a best lap of 2'02.605 and just half a second from third place. This quick time saw him breeze straight through to the 15 minute Q2 shootout session at the 5900 meter Silverstone track.

Having established a strong set up for the race with his Monster Yamaha Tech3 team, he surged onwards with the weather threatening to rain but remaining dry. With the chequered flag being shown at the end of the intense Q2 session, Smith shot to a best time of 2’01.593 on his penultimate run and this lap saw him successfully clinch seventh position with it being only just over four tenths of a second from the front row. His performance today sets him up for the epic showdown tomorrow aboard the Yamaha YZR-M1 where he will aim for glory in front of his home fans.

Meanwhile, Pol Espargaro powered home to undertake a solid qualifying campaign and clinch eighth. Having worked thoroughly on his Yamaha YZR-M1 from the start at the Silverstone circuit, the young Spaniard today set his fast lap of 2’02.365 during FP3 which was only half a second from the top of the board. His time saw him finish sixth and able to pass immediately through to the second qualifying session.

During Q2, the reigning Moto2 World Champion rode full throttle to produce a lap time of 2’01.747 which was fractionally behind his team mate by only 0.154. His efforts see him poised for the race campaign tomorrow, which he will begin from the middle of the third row as he looks to consolidate his seventh position in the World Championship standings during his rookie season in the premier class.

Bradley Smith 7th / 2'01.593 / 7 laps: “I may be a little disappointed to get bumped down from sixth position by Valentino right at the end but I am still pleased with seventh as it could be a blessing in disguise for tomorrow’s race start. By beginning in seventh and at the front of the third row, I will actually be entering the first corner from the outside. At the first turn, it’s easy to get passed on the inside but it will be almost better for me to roll around the outside of the curve which will then set me up for the inside of turn two.

Then I aim to make a break and close to the front runners. Of course, it would have been great to have finished sixth or even higher and ahead of a factory bike, but there are lots of positives from today and I can’t wait to get the show on the road in tomorrow’s 20 lap race in front of my home crowd. In addition, I want give a big thank you to my team who really made a great effort and helped to take a lot of pressure off me.”

Pol Espargaro 8th / 2'01.747 / 7 laps: “Unfortunately, we are a bit further back than where we had hoped to be, but this track is really difficult and quite long so even if you are just loosing a small amount in every corner, it all adds up at the end of the lap. Today itself has not been one of our best days, we had been struggling a bit this morning especially in sector four where I lost a lot of time in the fast corners. We are still trying to improve, particularly in this area and tomorrow’s warm up will be vital to put ourselves in a better position for the race. If every sector of the circuit was like the first two, where I have been really fast all weekend then we would probably be battling for the podium tomorrow.

As this isn’t the case, I am unsure what to expect, as some races have been really different to what I anticipated. I know that I have to make a good start and like in every GP, it’s important to try and follow the front runners. Then I will be able to see what they do differently during T3 and T4 in order to make me more confident. For sure I will enjoy the race anyway as I really like riding at Silverstone so I am hopeful of a strong result.”

The NGM Forward Racing rider Aleix Espargaro impressed once again on his Forward Yamaha, clocking a 2’01.448 to secure the fourth place, just 0.619 from the man on pole. Being the first open on the grid, Aleix will start the British GP from the first spot of the second row alongside Dani Pedrosa and Valentino Rossi.

After a difficult start of the weekend, Espargaro was very satisfied with his lap time that gives him extra confidence for the race.

It was a complicated qualifying for teammate Alex De Angelis. A technical problem prevented him to push as hard as he wanted. Despite this issue, he succeeded to set a promising 2’03.686 with hard tyres. Tomorrow Alex will start from the sixth row (17th).

Aleix Espargaro 4th / 2'01.448 / 6 laps: “I’m really happy with my best lap time. Silverstone is a tricky track and the cold temperatures make it more complicated to find the right set up with the bike. In the practices we struggled with the front, but in the qualifying I made a very good lap that gives me extra confidence for tomorrow’s race. We are close to the provisional podium. Regarding the tyre choice, which is really crucial here, I think I will race with the soft compound, even if I usually prefer the hard option. It’s cold and I prefer a safer solution.”

Alex De Angelis 17th / 2'03.686 / 6 laps: “In qualifying we suffered from a technical issue that prevented me to push as I wanted. It’s a pity but I’m happy that we did our best lap time despite this problem and with hard tyres. We are progressing session after session and I look forward to the race.”

Iannone and Hernandez are positive for tomorrow's race