MotoGP Czech Grand Prix winner Marc Marquez says he “pushed 100 percent from the beginning” as he was “afraid” of an attack from Yamaha duo Maverick Vinales and Fabio Quartararo. 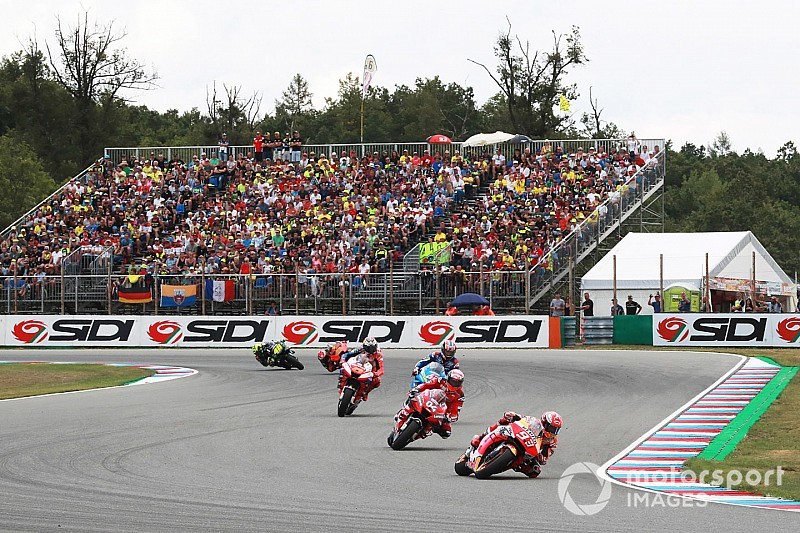 The Honda rider eased to his sixth win of the season by a margin of 2.4 seconds over Ducati's Andrea Dovizioso in Brno race shortened by a lap due to a lengthy weather delay.

Practice suggested his nearest rivals in the race would be Vinales on the works M1 and Petronas SRT counterpart Quartararo, despite both starting from ninth and 10th respectively.

However, neither made an impact in the race, with Quartararo 12 seconds adrift in seventh and Vinales 4.5s further back in ninth following a dismal start.

“I pushed my 100 percent from the beginning to the end, because I was a little bit afraid of the Yamaha riders,” Marquez admitted.

“They started behind, but in the warm-up they were very fast, especially Vinales and Quartararo. In the end top Yamaha was Valentino [Rossi, in sixth].

“I expected a big drop of the tyres in the end. Was like this, but I think all riders had a big drop, so I was able to manage in a good way.”

Marquez revealed he came into the race with a “completely new bike”, after his team radically altered its set-up following morning warm-up.

But he remained “convinced” he would be able to action his preferred strategy of leading from pole position.

“It was so difficult, especially when you are there on the grid and [have to] come back to the pit box,” he added when asked how the weather delay complicated the race.

“We went into the race with a new bike, a completely new set-up on the bike because in warm-up the feeling was not the best one and we decided to completely change the bike.

“Repsol Honda Team did a very great job to understand what was the problem.”

Marquez suffered a moment under braking for Turn 10 on lap 12 while still just over half a second in front of Dovizioso, but proceeded to open up a lead of 2.2s in three laps.

He branded this point of the race as the “most important” for ultimately securing victory.

“In that three, four laps after that big moment [at Turn 10] was the most important point of the race.”