Marquez couldn't do better than "bad" sixth at Mugello 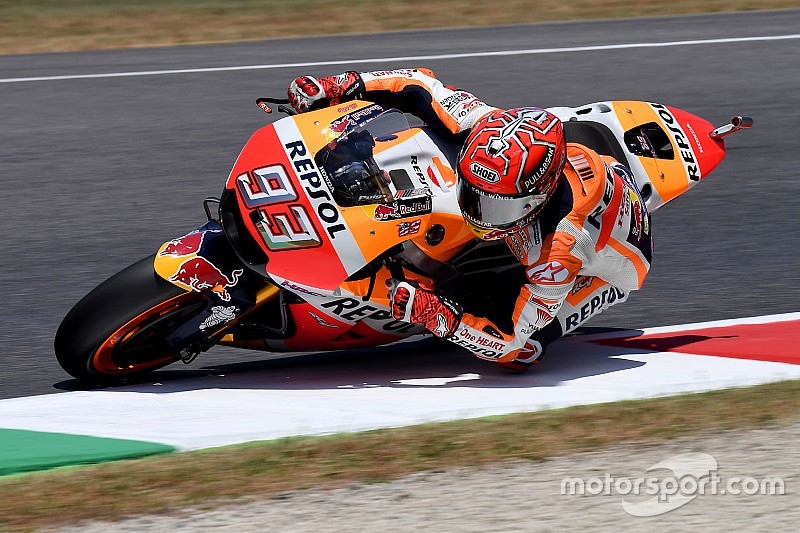 Marc Marquez says his main priority in Sunday’s Mugello MotoGP race was to finish after his crash at Le Mans, and that sixth was the “maximum” he could have achieved.

Having kept up with the leading group in the opening laps, Marquez soon dropped back and ended up spending the majority of the race held up by Alvaro Bautista’s Aspar Ducati.

Marquez used the asymmetric medium front tyre, with a harder compound on the right side that made it more durable than the regular hard used by Honda teammate Dani Pedrosa.

“After the Le Mans crash here I wanted to be at the logical level but no more than that,” said Marquez, who now trails Maverick Vinales by 37 points in the riders' standings.

“I started pushing 100 percent, thinking that maybe I could fight for victory, but when I was in the middle of the group I saw it was going to be hard. I was taking too many risks on the corners.

“In the end I tried to follow Bautista. I thought why pass him on the final lap if he's going to pass me on the straight, so I finished behind him and that's it.”

He added: “Obviously when you are outside the top five it's a bad result for a rider who fights for the championship. But at Le Mans I tried harder than I should and I crashed, so here I did the maximum.

“We are 37 points behind, which is not too far, but also not too close.”

“Pointless” for Honda to turn up, says Crutchlow

For LCR rider Cal Crutchlow, who was taken out of 11th place by fellow Honda rider Pedrosa on the final lap, the tyre allocation at Mugello created an impossible situation for the Honda contingent.

“We were managing a bad situation quite well because this weekend the tyres were terrible for us,” he said. “I believe that Michelin built the tyre for Ducati this weekend.

“It was pointless to even turn up. We may as well have stayed at home because we were just chasing our tail all weekend with the front tyre.”