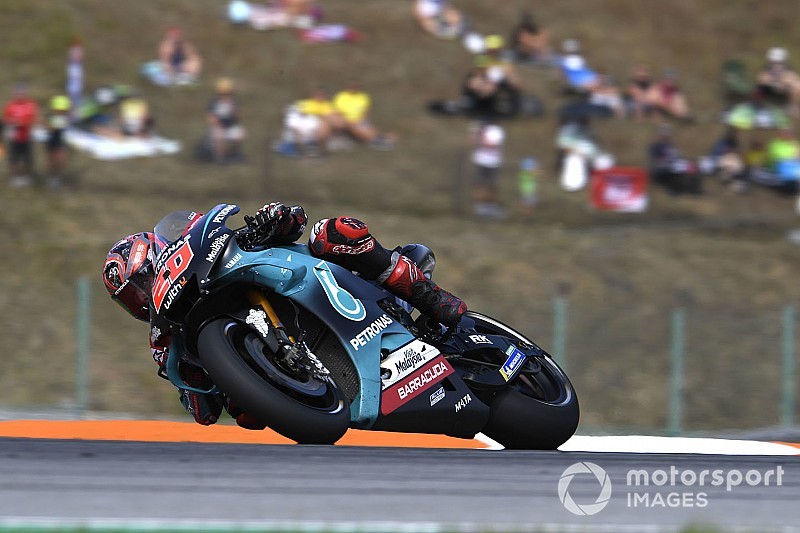 The Petronas SRT rider set the early pace as he evaluated different suspension components, firing in a 1m56.225s lap in the opening hour of the test.

Brno race winner and current championship leader Marc Marquez was his nearest challenger for some time, after guiding his Honda to a lap just 0.012s shy of the SRT rider's benchmark.

With three hours remaining, Quartararo had extended his advantage at the top of the timesheets with a 1m55.986s, before improving to the best time of the Brno weekend with a 1m55.648s.

Quartararo's final improvement came with just over an hour to go, with his 1m55.616s ensuring he would his 78-lap test programme on top.

Vinales – who only briefly tried the prototype 2020 engine Yamaha brought to the test – threatened Quartararo late on but came up just short with his 1m55.628s.

Teammate Valentino Rossi did run the new engine, and a late surge moved him up to his race finishing position of sixth.

Franco Morbidelli on the sister SRT M1 made sure all four Yamahas would occupy positions inside the top six after going third quickest with a 1m55.755s in the closing stages.

Suzuki's Alex Rins and Cal Crutchlow (LCR) on the first of the Hondas rounded out the top five, while Joan Mir was seventh despite a crash at Turn 1 in the final hour.

The Suzuki rider went off in the first sector and brought out the red flags while he was attended to by medical staff. He is thought to have escaped major injury.

He headed Marquez by 0.073s, the Honda rider trying a new aerodynamic fairing which he may homologate and race this week in Austria.

Marquez also tested a new chassis, aimed at curing the Honda's main issue of a difficulty in turning.

Pramac's Francesco Bagnaia and the works Ducati of Danilo Petrucci rounded out the top 10, with Takaaki Nakagami 0.025s outside in 11th on the year-old LCR-run Honda.

Brno podium finishers Andrea Dovizioso and Jack Miller (Pramac) flew under the radar in 12th and 13th on their Ducatis, with the former comparing aero packages while also testing a new swingarm.

Aprilia's Aleix Espargaro crashed at Turn 8 earlier in the day, but returned to the circuit on his Aprilia to end the session 1.4s off the pace in 16th.

Honda test rider Stefan Bradl – who deputised for the injured Jorge Lorenzo during the weekend, and will do so again this week in Spielberg – sat out the test.

KTM will remain at Brno on Tuesday and Wednesday for a private outing with test riders Dani Pedrosa and Mika Kallio ahead of its home race.

Pol Espargaro was top RC16 runner on Monday in 14th ahead of Tech3's Miguel Oliveira, while his teammate Hafizh Syahrin headed Johann Zarco in 19th.