San Marino Grand Prix winner Marc Marquez says Fabio Quartararo proved at Misano he has the “potential” and the “talent” to fight for the MotoGP title in 2020.

Quartararo came into MotoGP at the start of the year with the new Petronas Yamaha team off the back of a largely difficult junior career in grand prix racing, but has since scored three pole positions and four podiums in his rookie campaign.

He led for much of last Sunday’s 27-lap Misano race, resisting massive pressure from Marquez before eventually being pipped to a debut win on the final tour.

Marquez heaped praise on Quartararo, calling him “the real winner” at Misano, and admitting he will from now on be a “tough contender” for race wins and the title next season.

“The real winner, who did the best race, was Fabio,” said Marquez, who now leads the standings by 93 points.

“Fabio showed to all of us – I already knew [this] – that he has the potential, the talent, the bike, the team to fight for the championship next year.

“And I believe – I will try to avoid this – from now till the end of the season he will be a tough contender, and he will win some races.

“We will try to avoid this, but I predict next year he will be a tough contender for the championship.”

Quartararo later commented that battling with Marquez was a “dream come true”, and the “best moment of my life”.

Marquez highlighted Quartararo’s “incredible speed” through the third sector, and this ultimately forced him into his last-lap battle as he knew the Yamaha rider would have been able to pass him back had he done it any earlier.

“In [sector three], through the fast corners, he was incredibly fast,” Marquez added. “I don’t know if it’s his riding style or the way of his bike. Anyway, he was riding in a good way in that sector three.

“For that reason I say ‘I will attack in the last lap’, because if I did before it would be not possible [to win]. And that’s what I did, I managed in a perfect way.

“I was so careful to be inside the track [limits] after what happened in Moto2 because if you use the green track in the last lap – for me – you have to get penalised.” 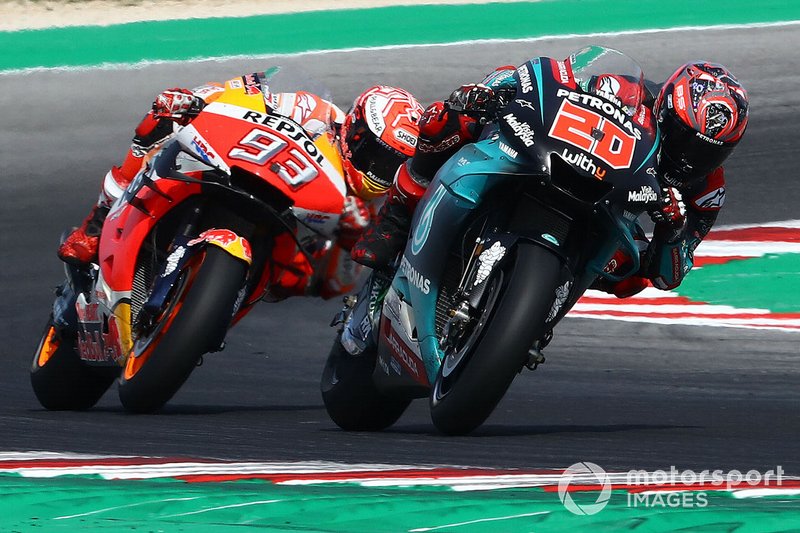