Rins admits race was "over" after Vinales hit 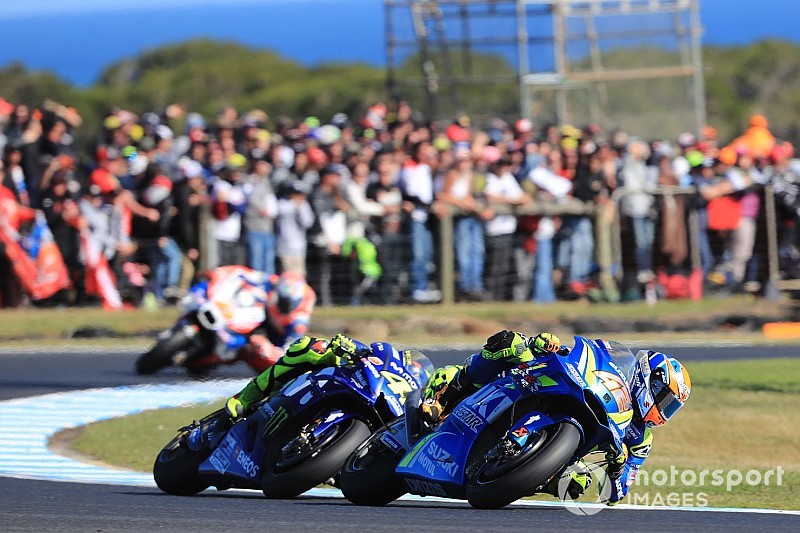 Suzuki MotoGP rider Alex Rins said his race at Phillip Island was "over" when he was hit by eventual winner Maverick Vinales at Turn 4.

Rins was part of the lead group, albeit only seventh, in the early stages of the race when he was nudged wide by Vinales at the Honda corner.

Vinales then soon charged into the lead and ran away with the victory, and a four-man chasing group involving Valentino Rossi, Andrea Dovizioso, Andrea Iannone and Alvaro Bautista was formed.

Rins eventually joined that group but only after spending seven laps behind Jack Miller, which compromised his tyre performance.

He eventually took fifth ahead of Rossi, but he said the collision with Vinales cost him a chance of a stronger result.

"The race was over when I noticed a strong impact by Maverick," revealed Rins. "At the time I was very angry, it was very unexpected.

"There I lose all the possibilities because I lose the first group then I lose a lot of time with Miller trying to overtake him.

"When I got to the group I was a little bit out of tyres. You have to learn and try to be more aggressive."

He added: "It was a very positive race and we held on until the end. I had a nice fight with Valentino, I'll take that with me.

"Yesterday I felt strong and today I beat Rossi. We are happy with the way we have the bike, we're going to Malaysia prepared."

Rins' teammate Iannone headed into the race as one of the favourites and in the end took second, his best result for Suzuki yet.

Iannone was fighting for the lead early on in the race but ran wide at Turn 4 and lost a couple of positions, a mistake that cost him dearly.

"I arrived in the race with a really strong feeling, for sure we have a really good potential for try to win the race, but when I made a mistake on the corner four, I arrive a little bit long with high speed, I lost four or five positions.

"I start to recover but in this moment I think this is not really good situation.

"I try to recover but I felt the tyres start to drop a little bit more than I expect so I decide I remain in this group [with Dovizioso, Rossi and Bautista]. I control the tyres the best and at the end I think is the best situation.

"I have a little bit more on the last four laps I try to push at 100 percent, I improve but also on the last lap I arrive another time at corner four I made a mistake.

"In any case I am really happy because we make a really good weekend, we start really well, we work on a good way in every practice we improve a little bit and this is the most important."