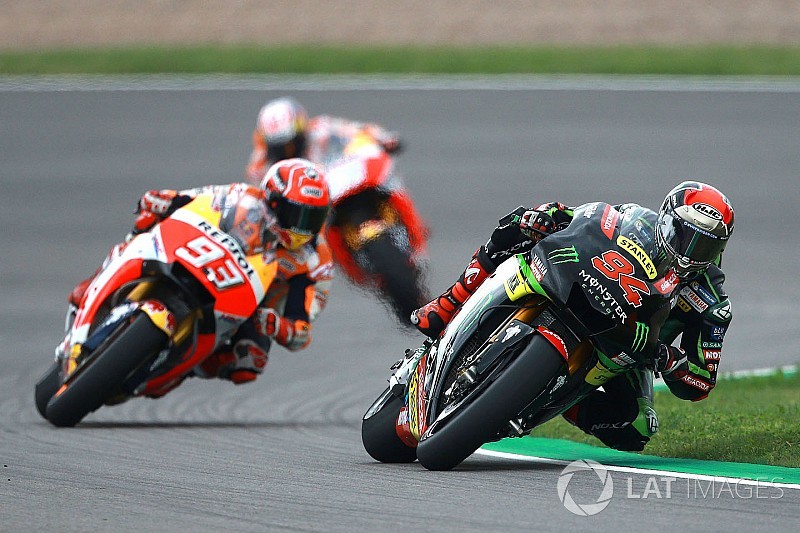 Valentino Rossi says he “studied everything” from Jonas Folger's run to runner-up in last year's German Grand Prix ahead of his own second-place finish in the 2018 edition of the MotoGP event.

Folger, who is absent from the grid this year due to illness, outshone the works Yamahas of Rossi and Maverick Vinales on his Tech 3-run M1 bike at the Sachsenring in 2017, challenging Marc Marquez and scoring his maiden podium.

On Sunday, Rossi finished just two seconds behind Marquez, and the Italian said after the race that Folger's performance had served as a reference point for how Yamaha can tackle a track that hasn't favoured it as of late.

“For me was very important the race of Folger last year,” Rossi said. “First of all, mentally, because I remember I arrive here last year and I was not comfortable with the bike, not strong enough.

“But Folger last year don't know that it's a difficult track for the Yamaha, and he did a fantastic race, at the level of Marc, so he stay there in the fight.

He added jokingly: “I think it's a good help for me, the race of Folger last year, so I have to give to him the trophy.”

Rossi, who had yet to finish higher than third in 2018 before Sachsenring, said the German GP was his best performance of the campaign thus far.

“It's not just my best result of the season, but is also my best race because I did a very good start,” he said. “Was very important, because I was sixth [on the grid], to try to overtake somebody at the start.

“And after, I ride well for the 30 laps, trying to save the tyre and I was always in the right place at the right moment. I was able to make some overtaking without making a mistake.”

Teammate Vinales' race was typical for the Spaniard's season, as he struggled early on and ran most of the distance in seventh before charging on used tyres in the end to complete the podium just six tenths behind Rossi.

“I prepare really well the last 10, 15 laps, but actually I didn't expect to be [running] seventh, I expected to be there in the front, trying to battle,” Vinales said.

“I think at the moment we recover the feeling where I can be quick at the end. So we need to improve my riding style to be fast at the beginning.

“Very low grip at the start of the race, and improving lap by lap. Honestly, it's strange but it's like this.”