Franco Morbidelli led a tight third MotoGP practice for the Teruel Grand Prix as all Ducati runners fall into Q1 for the second week in a row. 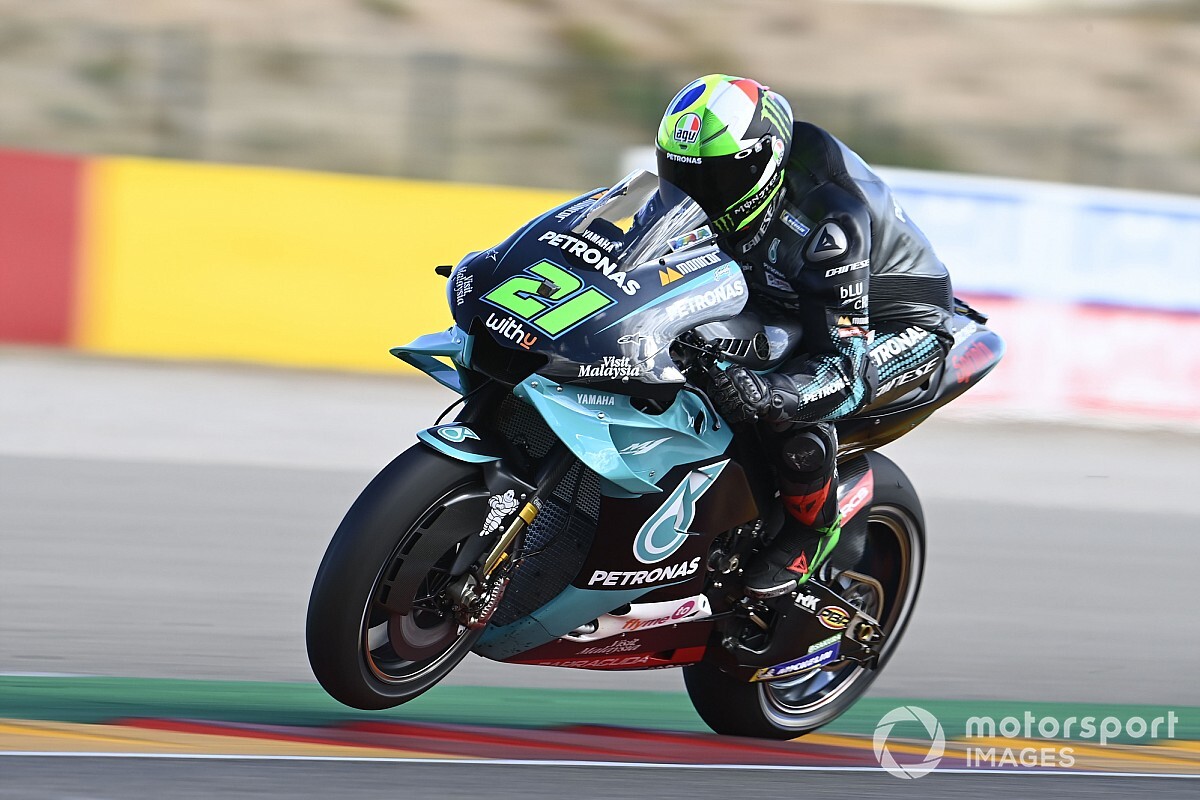 Not even four tenths covered the direct Q2 graduates at the end of FP3 in the top 10, with Petronas SRT’s Morbidelli leading the pack by 0.059 seconds with a 1m47.333s posted at the death.

Improvements on the combined timesheets were typically minimal in the early stages of FP3, with Morbidelli the most notable improver up to eighth from 15th with a 1m48.233s.

The factory Ducatis of Danilo Petrucci and Andrea Dovizioso did find time on their Friday bests, but remained 16th and 18th on the timesheets following a dismal Friday.

With half the 45-minute session gone, Morbidelli’s SRT teammate Fabio Quartararo went fastest on the individual timesheet with a 1m48.171s, before finally deposing Nakagami’s Friday best with a 1m47.401s.

Quartararo, just as he did on Friday, spent a handful of laps at the start of the session shadowing title rival Joan Mir on the Suzuki having spotted on Friday where the Yamaha was losing out to the GSX-RR.

As the pace increased in the closing stages as the grid made their plays to gain direct access to the pole shootout session, Nakagami’s lap remained intact.

However, Morbidelli found time on his last lap to depose Nakagami by 0.059s, while Quartararo held onto third ahead of factory Yamaha counterpart Maverick Vinales.

Alex Marquez on the factory Honda leaped up to fifth late with a 1m47.546s to make his second appearance in Q2 this season, while fellow rookie Iker Lecuona led the KTM charge on the Tech 3 RC16.

Aragon GP race winner Alex Rins was the best Suzuki runner in seventh, with Miguel Oliveira ensuring both Tech 3 KTMs feature in Q2 this afternoon after the Austrian manufacturer made a breakthrough in set-up following a tough time last weekend.

Miller was the closest any Ducati rider got to escaping Q1 in FP3, with title contender Dovizioso only 14th as his tough weekend continues.

He’ll be joined in Q1 by teammate Petrucci, who was 17th ahead of Pramac’s Francesco Bagnaia, while factory KTM rider Pol Espargaro will also feature after a late mistake on his flying lap.

Avintia’s Johann Zarco brought up the rear of the field after crashing at Turn 9 in the closing stages.

MotoGP on TV today – How can I watch qualifying for the Teruel GP?

Bradl claims he'll see out 2020 season in place of Marquez