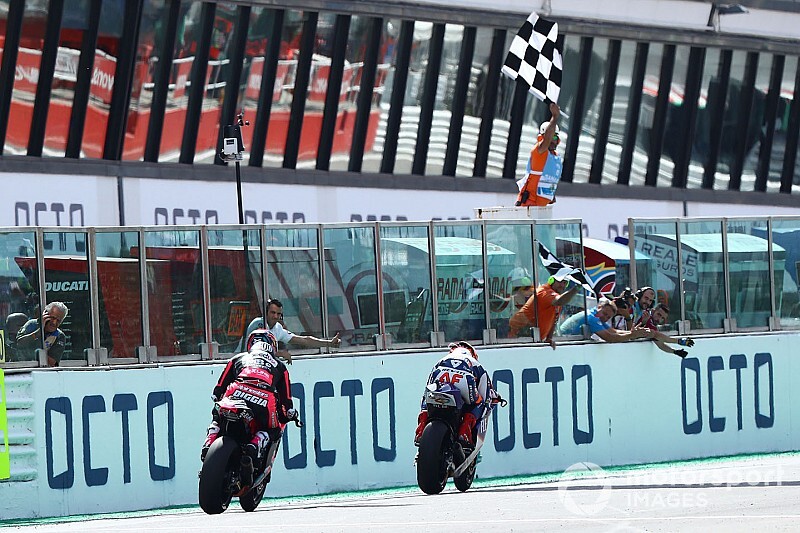 MotoGP has issued an updated set of track limits guidelines in the wake of the controversial finish to last weekend's Moto2 race at Misano.

The new regulations are designed to avoid a repeat of the situation in the intermediate class last weekend, when Augusto Fernandez passed Fabio Di Giannantonio on the last lap after running out wide on to the green tarmac outside of the track.

Stewards did not opt to penalise Fernandez after an initial investigation, and a subsequent appeal filed by Di Giannantonio's Speed Up team was rejected.

In the build-up to this weekend's Aragon Grand Prix, Marc Marquez argued a bad precedent had been set by the decision not to penalise Fernandez, who was effectively able to 'bank' track limits warnings and commit a third infraction on the last lap without consequence.

Now MotoGP organisers have changed the rules concerning track limits violations, defined as when "a rider has both tyres outside the track at the same time".

The main change is that from now, "an infraction on the last lap that has affected a race result must indicate that the rider in question was disadvantaged" and that if "there is no clear disadvantage, the rider will be penalised with a change of position or a time penalty".

It is implied that Fernandez would not have been able to keep his Misano victory under the new regulations.

Outside of the final lap, riders will still receive a warning after three track limits violations, and will be issued a Long Lap penalty after five instances, although stewards reserve the right to award a penalty for a specific infraction if a significant advantage was gained.

These instances do not count towards the number required to trigger a warning or Long Lap penalty, and nor do instances where a rider is "clearly disadvantaged" by leaving the track.

In MotoE, due to the shorter race lengths, riders are warned after one track limits violation and penalised after three.