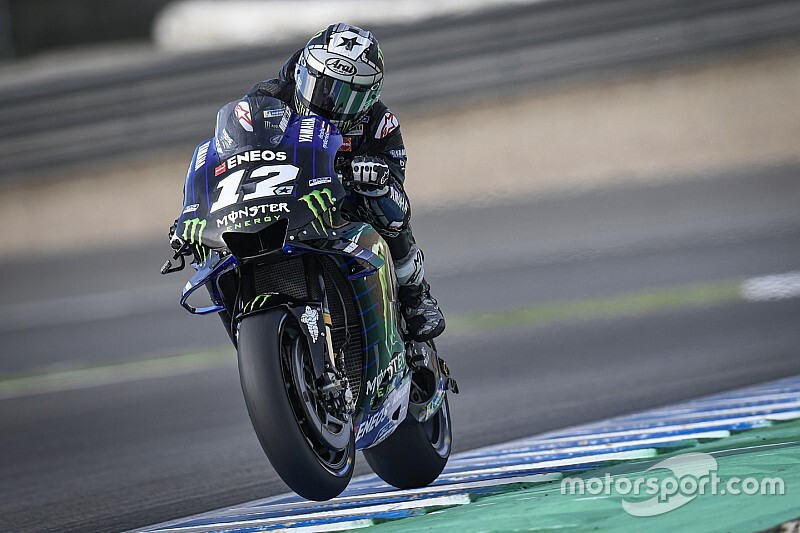 Maverick Vinales opened up the final MotoGP post-season test of 2019 at Jerez fastest in a session which was red-flagged three times, as Marc Marquez also crashed in the afternoon.

The track stayed silent for the first 45 minutes of the session before Aleix Espargaro disrupted the calm on his Aprilia, with KTM duo Brad Binder and Pol Espargaro following him soon after.

Espargaro – who had another new chassis to try alongside the ’20 bike he tested at Valencia and his ’19-spec – set the early pace with a 1m38.672s, doing so on the RC16 he raced this season.

Marquez took over from the KTM rider not long after with a 1m38.595s – also set on his ’19 bike – before Fabio Quartararo and Vinales made it a Yamaha 1-2.

Valencia test pacesetter Vinales fired in his 1m37.927s on the current works M1 with just over six hours remaining, before moving seven tenths clear of the field an hour later with a 1m37.187s on the ’20 prototype.

This went unchallenged for much of the day, which was interrupted several times by red flags and drips of rain.

The session was halted with 3h45m still on the clock as a precaution after Ducati test rider Michele Pirro’s Desmosedici stopped on the run into the Pedrosa right-hander.

Prior to the stoppage, Marquez crashed heavily at the final corner while running on one of the two ’20 RC213V prototypes he has available this week.

He had to be taken to the medical centre after experiencing pain in his shoulder, but escaped injury and returned to the session later in the afternoon.

Just over 45 minutes after the first red flag, a crash for Tech 3 rookie Iker Lecuona brought the session to a stop when he punctured the air fence in a crash at the fast Turn 4 left.

Escaping with just some pain, Lecuona opted to end his day early and was 20th on the timesheets.

Spits of rain forced the field into pitlane as the session entered its final two hours, though conditions cleared enough for more dry running to be had in the last 90 minutes.

Vinales bettered his benchmark to a 1m37.131s, while Quartararo held onto second, the Frenchman testing the 2020-spec Yamaha engine throughout the day.

Suzuki duo Joan Mir – who crashed early on – and Alex Rins, both continuing to test the GSX-RR’s new chassis and engine, were third and fourth.

Quartararo's Petronas teammate Franco Morbidelli made it three Yamaha’s in the top five with Marquez brushing off his fall to end the day sixth ahead of LCR counterpart Cal Crutchlow.

KTM’s Espargaro wound up eighth despite a late fall from one of his ’20 bikes, which caused the third red flag of the day, as the works Ducatis of Andrea Dovizioso and Danilo Petrucci – who missed the last test day in Valencia due to injury – completed the top 10.

Pramac’s Jack Miller trailed his Ducati stablemates in 11th as he tested the 2020 Desmosedici engine, while Alex Marquez was top rookie in 17th as he made his first appearance in the Repsol Honda team, having rode for LCR in Valencia.

Valentino Rossi was the slowest of the four Yamahas in 14th, 1.6s off the pace.

Avintia’s Eric Granado, who is replacing the ousted Karel Abraham for this test and is riding a Ducati GP18 as a reward for finishing third in MotoE this season, was 5.9s off the pace in last.