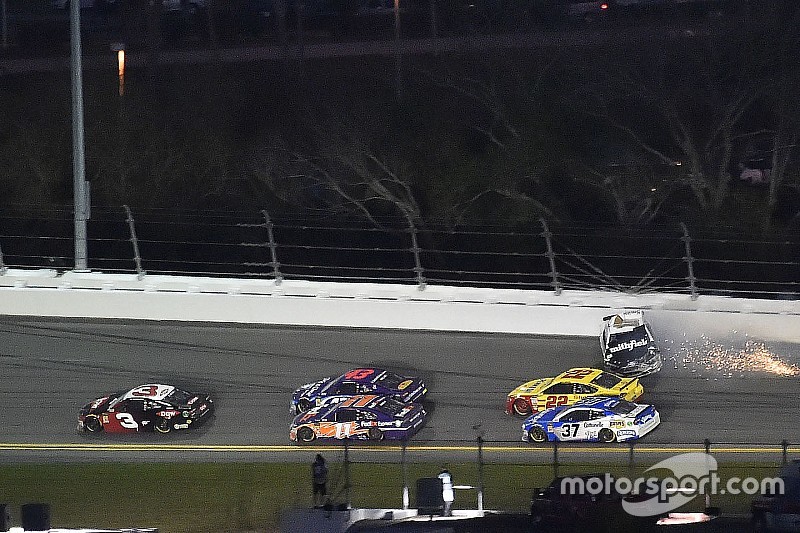 Stewart-Haas Racing's Aric Almirola says he would "return the favor" if he was to again fight Austin Dillon for victory in the 2019 NASCAR Cup Series season-opening Daytona 500.

Dillon took Chevrolet and Richard Childress Racing's only win of 2018 in last year's Daytona 500 after a last-lap clash with Almirola in which the SHR driver was tipped into a race-ending spin by his rival.

Almirola came out in support of Dillon immediately after the race, saying: "He's not driving too aggressively, he's trying to win the Daytona 500 just like I was."

But ahead of this year's Daytona 500, Almirola said he would retaliate given the "same opportunity" in the 2019 race.

“I felt so confident. I knew that if I hit all of my gears perfectly, I would have a shot at it and I did," Almirola said of last year's race.

"I looked in my mirror and saw everyone racing side-by-side and figured that I was in control of the race and, if I made the right move, I was going to be the winner of the Daytona 500.

Half a lap away from history

"About halfway down the back straightaway, they [Dillon and Denny Hamlin] were coming with a run and I pulled over to block it.

"In your head, you know it’s the Daytona 500 and you’re a mile-and-a-half away from winning, so you’re going to do everything you know to try and win that race.

"I pulled over to block and put a pretty aggressive block on the #3 [Dillon]. I knew that if I blocked high, he was going to go low.

"As soon as I blocked high I knew I was going to have to immediately block low. When I blocked low, he turned against my back bumper and into the outside wall.

"I wrecked a mile away from winning the Daytona 500.

"I don’t necessarily fault him for what he did but, given the same opportunity this year, you can bet your bottom dollar I would return the favor.

"You’re going to do whatever it takes.”

Almirola and his fellow Ford drivers will give the new-for-2019 Mustang its Cup series debut at Daytona in the first NASCAR match-up between the Mustang and the Camaro.

Why NASCAR can't win its war on cheating overnight