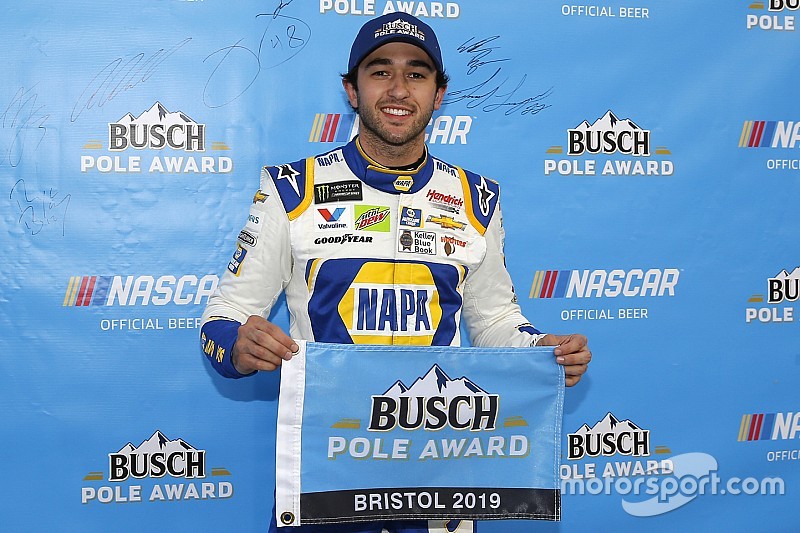 Chase Elliott saved his best for last and ended up with the pole.

Ryan Blaney actually set a track qualifying record in Round 2 of Friday’s qualifying session at Bristol (Tenn.) Motor Speedway, but Elliott was fastest in the final round.

The pole is the first for Elliott this season and fifth of his Monster Energy NASCAR Cup Series career. All four of his previous Cup poles have come on superspeedways.

"I've been wanting a pole outside of Daytona and Talladega for quite some time now. I was able to deliver a pole to my team that really deserved it more than one time over the years," Elliott said. "I felt like I hadn't  played my part.

"It was nice to give my guys one today from that standpoint. I had a fast NAPA Chevy. I had a solid lap in that last round. I think Ryan (Blaney) probably threw me a bone, it looked like he may have messed up. He had a pretty good lap going.

"We have some work to do tomorrow to be really good on Sunday but I think it's doable. The starting spot is great, but it's just a starting spot. The first pit stall is probably more important than that. Hopefully, we'll give ourselves a chance."

Blaney set a new track qualifying lap while leading the second round of knockout qualifying.

Also advancing to the final round were Johnson, Bowyer, Logano, Keselowski, Hamlin, Newman and Menard.

Most teams didn’t attempt their qualifying runs until less than four minutes remained in the 10-minute session.

Among those who failed to advance to the final round were Kevin Harvick, Alex Bowman, Austin Dillon, Kyle Larson, Kyle Busch and Martin Truex Jr.

“We just got too tight there. Our teammates were fast like always,” Bowman said. “This is a good place for us so I hope we can race strong.”

Larson, who ended up 16th, said he wished he had gone out earlier so perhaps he would have had more time to make a second run in the round.

Several drivers complained about the application of the PJ1 track compound this weekend, saying its inconsistent use makes it difficult for teams to learn what they need to go faster.

Blaney, who was fastest in Friday’s practice, led the way in the first 10-minute session of knockout qualifying.

Rounding out the top-10 were Jones, Stenhouse, Elliott, Hamlin and Bowman.

Most teams waited until there was less than four minutes left in the session before attempting their qualifying runs.

Among those who failed to advance to the second round were Chris Buescher, Daniel Hemric, Kurt Busch, Bubba Wallace and Ryan Preece.

“The car was loose and we didn’t get a good time,” Kurt Busch, a six-time winner at the track, said. “I did one lap, that’s all I got.”