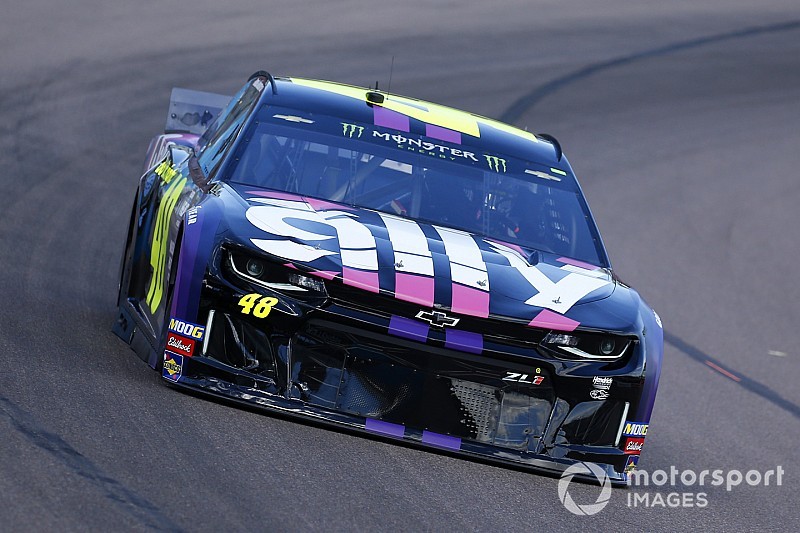 Jimmie Johnson was left feeling positive after his best run of the 2019 season Sunday at ISM Raceway in Phoenix, Arizona.

Jimmie Johnson enjoyed his strongest run of the year at ISM Raceway Sunday, placing eighth after leading some laps and playing the strategy right. He was also the top-finishing Hendrick car.

Excluding plate races, it was Johnson's best result since nearly winning at the Charlotte Roval in October of last year.

The seven-time NASCAR Cup Series champion started back in 15th, but quickly made his way inside the top-ten and spent a good portion of the race contesting for positions inside the top-five.

“Yeah, definitely a strong performance," he said after climbing from the No. 48 Hendrick Motorsports Chevrolet Camaro. "We need more. We need to find more, but on a short track where grip is so important our guys did a nice job all weekend long of bringing a little bit more. Excited about that. We weathered the storm on two tires, on four and ended up with a nice top 10.”

With Johnson's recent struggles and Team Hendrick's run of misfortune, some would consider the finish a victory, but the veteran driver wouldn't go that far.

“No, it’s not a victory, but it’s definitely a solid day for the Ally Chevrolet. These guys have been working so hard at Hendrick Motorsports to get us more and more and we took a good step in the right direction. I even think at Vegas we were better than where we finished.

"Once we lost track position, we struggled the second half of the race. Atlanta was terrible, can’t say anything different there. We are learning each week and I still think we have some catching up to do, but certainly a solid performance."

He also had nothing but good things to say about new crew chief Kevin Meendering, whose strategy calls even got the No. 48 out front for a handful of laps at one point.

"Kevin called a great race, it was really tricky with strategy, two tires, four tires, our pit crew had to adjust mid pit stop one time and go from four to two and everybody responded really well.”