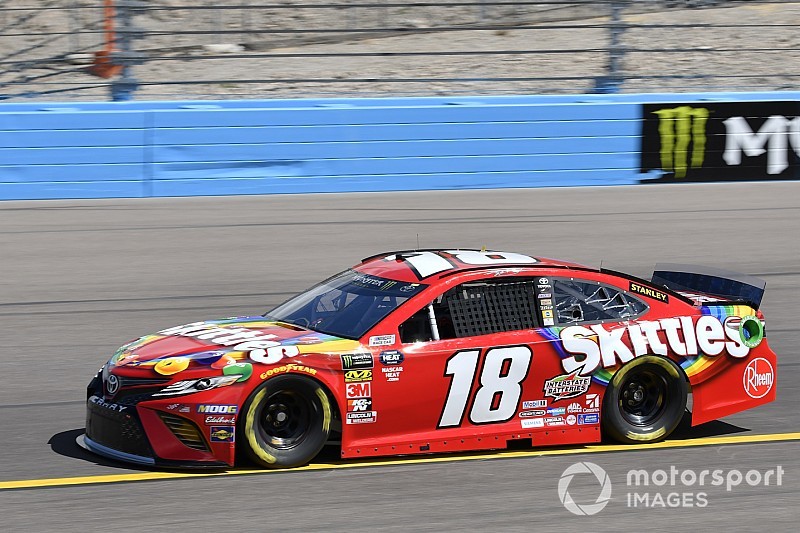 Kyle Busch’s denomination of Stage 2 at ISM Raceway near Phoenix was secured when a caution was displayed with two of 75 laps to go.

Busch led every lap of the stage and held a nearly 3-second lead over Clint Bowyer when the caution was displayed. Kevin Harvick finished third, Martin Truex Jr. was fourth and Denny Hamlin completed the top-five.

During the break between Stages 1 and 2, Kyle Busch elected to remain on the track while most of the lead-lap cars decided to pit.

On the restart on Lap 84, Busch led the way followed by Harvick, Hamlin and Bowyer. Ty Dillon was the first car off pit road among those who pit.

With 55 laps remaining in the second stage, Kyle Busch held about a 1 second lead over Bowyer. They were followed by Harvick and Truex.

Kyle Busch built up a 1.7-second lead over Bowyer with 40 laps to go in the stage. Harvick remained in third.

On Lap 116, Kyle Busch put Brad Keselowski two laps down. Keselowski had spun and tagged the wall in the first stage.

With 25 laps to go, Kyle Busch had expanded his lead over Bowyer to more than 3.6 seconds. There were 21 cars on the lead lap.

On Lap 140, Busch made slight contact with the inside lapped car of Daniel Suarez as he went three-wide with William Byron, who was on the outside.

On Lap 148, Bowman spun and hit the Turn 2 wall which brought out a caution. It appeared the race would not return to green before the completion of the stage.

Kyle Busch tops Truex at Phoenix for NASCAR win No. 199