How dominant is Martin Truex Jr.? Just look at the numbers 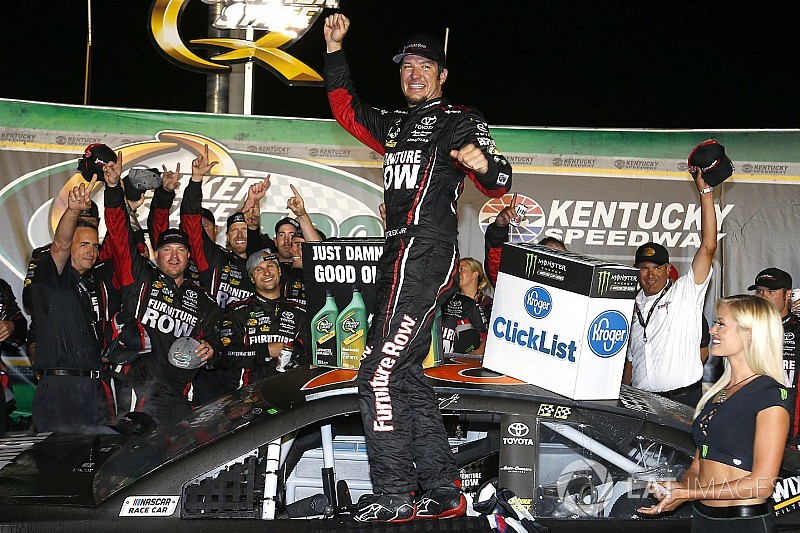 The strong playoff push for Martin Truex Jr. continues with a dominant victory at Kentucky Speedway.

The No. 78 Furniture Row Racing team’s victory at Kentucky Speedway on Saturday night marked its third of the season. For the second time this season, Truex swept all three stages on the way to his 10th career win.

Think about this: Truex has led more than twice as many laps (1,115) as 55 of his 57 fellow Monster Energy Cup Series competitors this season. With identical equipment, Truex has topped Kyle Busch’s 858-laps led. Points leader Kyle Larson is third on the list with 721 laps led at the point.

And with his Kentucky win, his eighth since joining Furniture Row Racing in 2014, Truex trails Larson by just one point in the standings.

Truex led 145 circuits (on the way to a race-high 152), lapped all but eight cars and established more than a 15-second lead over the field before Kurt Busch’s engine blew to send the Quaker State 400 into overtime. The No. 78 car was one-third of a lap away from taking the white flag when NASCAR called the caution.

Crew chief Cole Pearn elected not to pit while the other seven lead-lap cars came down pit road. With a push from Larson, Truex shot to the front ahead of Kyle Busch and held on for the win.

In the five seasons prior to Truex's arrival, Furniture Row Racing had just one win and one playoff appearance. Now, the organization is a perennial NASCAR contender. In 126 races in the No. 78 car, Truex has scored five of his 12 poles, 23 of his 54 top fives and 56 of his 146 top 10s.

Pearn feels that one of the keys to the team’s success in 2017 is Truex’s stellar qualifying effort. His average starting position of 7.9 this year is by far his best in 12 Cup seasons — and a remarkable improvement over his career average of 15.3.

“I think a lot of it comes down to qualifying well,” Pearn said. “I think if you look at our qualifying averages, we've been really stout that way. Definitely our best as a team. I think having good track position to start the race is a huge, important part of it, and you're able to maintain that, it makes it a lot easier to score stage points for sure.

It was at Pearn’s urging that Visser took a shot on Truex. It's a move that has paid off everyone.

“Cole was part of the group that originally picked Martin when he became available,” Visser said. “He was the guy that Cole wanted, and (general manager) Joe (Garone) wanted him.

“I think it helps Martin to know that these guys really wanted him, and obviously he's just blossomed here.”

Send in your questions for the NASCAR Mailbag