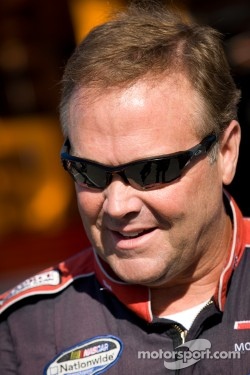 GAFFNEY, S.C. (November 1, 2011) – Mike Wallace will have some extra inspiration to succeed this weekend when he climbs behind the wheel of the No. 01 G&K Services Chevrolet for JD Motorsports at Texas Motor Speedway. This past Sunday, his dad, Russ Wallace, passed away at the age of 77. The patriarch of the Wallace family was an accomplished racer himself back in his St. Louis days. And, it’s safe to say he passed on those winning skills to his three sons Rusty, Mike and Kenny as each have won NASCAR races during their careers.

A week prior to his passing, Russ was able to see Mike win the NASCAR Camping World Truck Series race at Talladega Superspeedway. This Saturday will be much different for Mike when he takes to the track knowing, for the first time in his racing career, his dad will be watching from high above.

In his honor, Mike, his brother Kenny and their nephew Steve Wallace are taking their names off their respective driving doors and replacing them with Russ Wallace. Adding a personal touch, Mike’s No. 01 Chevrolet will have “Russ Wallace – my Dad” on his car. With that, he and the No. 01 G&K Services team of JD Motorsports will take to the 1.5-mile oval of TMS in honor of Mike’s dad.

Mike Wallace Quotes: “You know, we wished we didn’t have to race this weekend in light of what happened. But, if there’s one thing dad would have wanted us all to do and that is to go racing. He was a racer and who to better understand what we do than him.”

“He was able to watch me win the Talladega truck race and showed up at our little get together later that night to congratulate me. He was so happy to see me win, and for our whole family.”

“So, we’ll go to Texas and hope one of us can win the race in honor of Russ. I know everyone at JD Motorsports has put some extra care into the car for this weekend knowing that, too.”

“I would like to thank everyone for their notes, messages, phone calls and concerns for us during this time. You don’t realize just how big this racing family really is until something like this happens.”