Rodney Childers cashed in on second chance at Michigan win 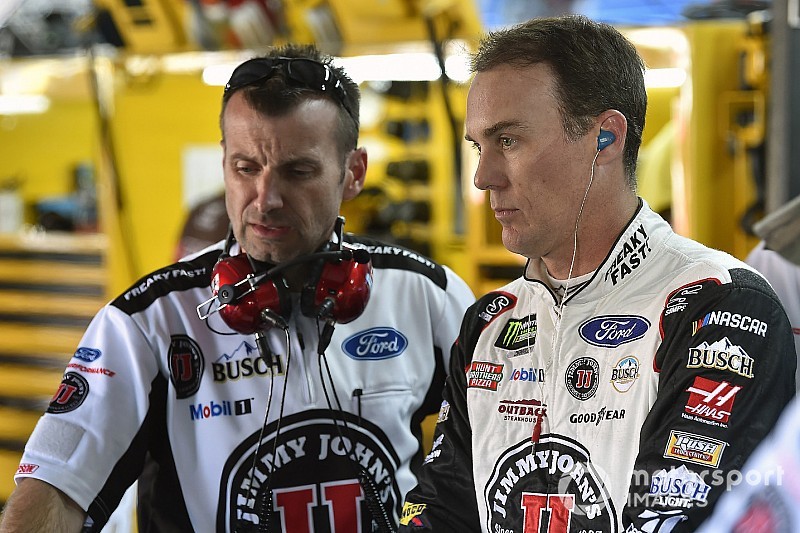 Rodney Childers was not going to make the same mistake twice.

Childers, crew chief for the No. 4 Stewart-Haas Racing Ford driven by Kevin Harvick, had come to the June race at Michigan International Speedway with a fast car and good game plan to pick up a victory.

Unfortunately, the No. 4 team got thrown off its stride and had to alter its strategy to deal with issues it continued to have with the tires.

Harvick ultimately finished seventh in the race, but Childers returned to Sunday’s race at Michigan with the same car but a few minor tweaks.

“We felt like we had really good speed in the spring. Our biggest problem in the spring was we had too much left-front camber and we kept cording the outside of the left-front tire, and it just put us in a bad position,” Childers explained.

“We had to put four tires on it a few times when we really needed to put two tires on it and keep track position. That was kind of the thing that messed us up in the spring, but we felt confident coming back this weekend that we would have a good car.

“It was cool to see it unload on Friday and how fast it was, and it’s been a lot of fun.”

Even Sunday’s race had a hiccup or two for Harvick.

He was forced to pit under green in Stage 1 for a cut tire and a timely caution came out in Stage 2 just as Harvick may have been had problems erupt from a loose wheel.

“At that point, you’ve got to run the rest of the race, and we were kind of in a good situation where a lot of other people were going to come back down and pit again – (Kyle Busch, Martin Truex Jr.) – some of those guys that we felt like were competition,” Childers said.

“So coming back in and putting left (side tires) on was just about making sure that left-front wheel was tight and that we weren’t going to have to pit under green.”

Harvick ended up pitting twice but the four tires may have actually helped him in the last 80-lap stage. He took the lead with 17 of 200 laps remaining and cruised to the win as many of the top contenders had to pit for fuel or ran out on the track.

“I think it helped our balance,” Childers said. “It seemed like it turned better after that and was able to just keep the gas down a little bit more than what we had all day, and it ended up being a good thing.”

Despite setback Jimmie Johnson plans to 'fight for every point'