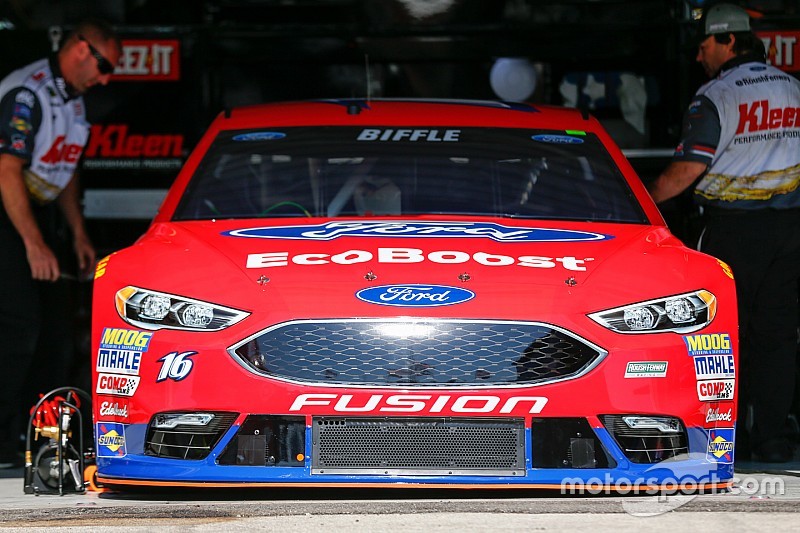 Roush Fenway Racing is still evaluating whether the team will appeal the penalty stemming from the No. 16 Ford failing post-race inspection in the Coca-Cola 600.

However, crew chief Brian Pattie will skip this weekend’s activities at Pocono Raceway.

Body components must also conform to the nominal size, drawing number, and part number; and 12.5.3.4.1 c: Unauthorized installation of additional components or modification of existing components not in conformance with the NASCAR Rules which affect the aerodynamic properties of the vehicle).

Pattie was suspended through June 15 and placed on probation through the end of the year. Robbie Reiser will act as interim crew chief with team engineer Randy Seals and car chief Bill Curwood taking elevated roles. Team manager Kevin Kidd will also be on the box this weekend to lend support to Greg Biffle’s effort.

The team was also docked 15 championship driver and owner points. The organization had been warned earlier this season about manipulating the body.

"That is not where we wanted," said Biffle. "We wanted to get a top-10 so that is kind of a little bit of a shot that we don’t get to have Brian for the next couple weeks. We get it though. I can’t comment on whether I think it is fair or not or if we were off in a couple areas more than we should have been. I do know it is the first time they have had our car in quite some time so it seems a little harsh to me to not give us a chance to fix it. I get that it has to be fair for everyone. It doesn’t matter that we finished 11th and never led a lap. It isn’t like we dominated the whole race, but that doesn’t matter. It is disappointing but we will get through it. It is only a couple of races so we move on.”

NASCAR driver Kasey Kahne to compete at Ohsweken in July