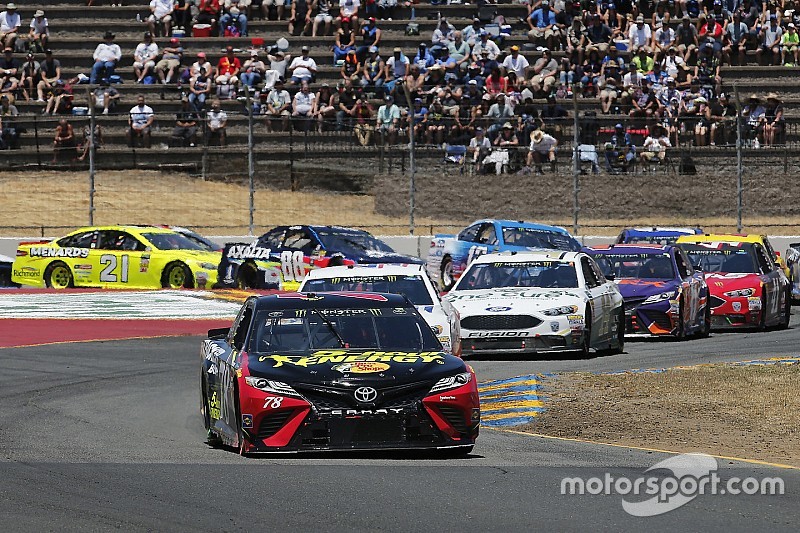 With the final race of the regular season just ahead and the news that Furniture Row Racing would be shutting down, there's plenty to discuss on this week's edition of the NASCAR Roundtable.

1. How concerned should NASCAR be with the announcement on Tuesday of Furniture Row Racing ceasing operations?

Jim Utter: If the demise of Furniture Row Racing was simply about the loss of one half-season sponsor, I think it would be a huge crisis for NASCAR. But, it's not. There is many more moving pieces to this story that the loss of one sponsor. Who set the price on the "increasing costs of the technical alliance with Joe Gibbs Racing?" It wasn't NASCAR. It was JGR. And in the end, the competitor with the team isn't hurt by this move - he actually moves into what could be arguably be a better long-term position. For years Barney Visser poured his own money into running his team and taking a loss. In how many business models does that equate to a viable long-term future?

Kenny Bruce: Wow! Extremely concerned? Does that sound severe enough? Something like this should result in many, many closed-door meetings between officials and teams and OEMS and anyone else with a stake in the sport. But I honestly don’t know if that will be the case today. Nothing seems to get done or acted upon without going through the drivers council and owners council and track council, etc. Which is the root of the problem, in my opinion. Too many chefs in the kitchen.

Nick DeGroot: This shouldn't happen. The reigning series champions shouldn't find themselves in a position where the only option is to close up shop, especially since they are in the hunt for yet another title this year. There's nothing good coming from this sort of news and ultimately, it's one less competitive team gone from the grid. And ignoring it or changing the narrative is the wrong decision. I don't like those who constantly spew negativity with the sport because a lot of the things complained about are overblown, but there's no exaggerating the loss of a top tier team like this and how it looks. There needs to be a serious sit-down and self-evaluation by those within and at the head of the sport.

2. We've reached the final race of the NASCAR Cup Series regular season. Up to this point, what has been the biggest surprise for you in 2018?

Jim: The struggles of Hendrick Motorsports, and in particular Jimmie Johnson, continue to astound me. The organization as a whole has clearly made gains since the beginning of the year, but there have been many, many races when the No. 48 team has been absolutely no factor in the outcome - which given its his record of success, is almost unfathomable.

Kenny: The biggest surprise to me is that Jimmie Johnson has yet to win a race this season. It’s stunning to think that a driver and team that has won MULTIPLE races every season since 2002 has been shut out thus far this year. It’s not as if his win total has begun to slowly tail off either – two years ago he led the series in wins. This year he hasn’t even been close.

Nick: The continued struggles of Jimmie Johnson and the domination of the 'Big 3' lead the way in my opinion. I'd also add to that the fact that Kyle Larson, who should have two to three victories this year, still has none.

Tim: I would have to go along with my colleagues that Jimmie Johnson struggling to the point he could miss the playoffs is a major surprise to me. I would have bet a weeks pay at the start of the season that he wouldn’t go the entire regular season without a win.

3. Do you think this is a make-or-break race for the Xfinity Series this weekend at IMS? There were some reports last week that the owners of nearby O'Reilly Raceway Park are looking to upgrade the facility. Do you think it's time to go back to the short track?

Jim: The race at ORP, or whatever it's called now, was never moved because it didn't produce good racing. In fact, it was always the best event during the Brickyard weekend in terms of competition. The simple fact is then-series sponsor Nationwide found the facility incompatible with its hospitality requirements and wanted to take advantage of what IMS had to offer. Unfortunately, this is the same issue every short track held dear by race fans faces when moving NASCAR events are discussed. There is so much more than just seats for fans that are required.

Kenny: If I say yes will NASCAR move the race back to Lucas Oil Raceway? I think one of the biggest mistakes NASCAR has made was moving the Xfinity Series away from the smaller venues to run as companion events on Cup weekends. I understand some of the reasoning but the series lost its soul when that happened. And it lost a lot of fans who either couldn’t afford the travel or would rather stay home and support their local track.

Nick: I don't like the Xfinity Series at IMS and would very much like to see them back at the short track. In fact, I'm of the opinion that we need more races unique to the Xfinity and CWTS schedule, races to set them apart from the Cup Series and give them back their identity.

Tim: As a person who loves the short tracks I have been ready for the track to host the Xfinity and Truck Series events again and none of us know the whole story. As a former promoter of a track that hosted a Busch Series race and lost it, the event has to make sense for the track. I hope there is a way to get more events back to most short tracks including ORP (IRP) but I have a strong feeling the business model will need to be adjusted to make it possible.

4. Does the recent string of new winners outside the Big 3 (three of the last four races) lead you to believe that the dominant trio may face some serious competition in the upcoming playoffs?

Jim: I think it has been a wake up call so to speak. Teams are making serious gains - something that does not always occur this late in the season. Kyle Larson has already shown to be a contend throughout the year and if his Chip Ganassi Racing team can continue to show the speed it did at Darlington, the "Big 3" may soon become the "Big 4."

Kenny: As good as the “Big 3” of Kevin Harvick, Kyle Busch and Martin Truex Jr., have been this year, I never figured they were locks to advance through the playoffs without some stiff competition. Their bonus points will certainly help them accomplish that, but other teams have begun to close the gap that existed earlier this year. I expect some surprises when the Playoffs get under way.

Nick: Not sure about that. With their bonus points and their continued strength, I don't think these recent winners change anything. I will say this though: If Kyle Larson can make it to the final four at Homestead, he suddenly becomes the title favorite because he knows how to run that track better than most.

Tim: I don’t know if I would call it ‘serious’ or not, but Kyle Larson has shown he has the speed at times to run with the ‘Big 3’ but I also know that a driver can also get hot and all it takes is some bad luck at the wrong time and we could see some big upsets in the playoffs. However, I honestly feel at least two - if not all three - of the ‘Big 3’ make it to Homestead-Miami Speedway in November.

5. Paul Menard scored a surprise win at IMS with Richard Childress Racing in 2011. Do you think he or another driver could pull another upset this Sunday? If not Menard, who do you think could shock the NASCAR world and pick up a win at the historic track?

Jim: Sorry, but I don't see any upsets. Every year we go to the cut-off race (where ever it is) with the idea someone could "win their way into the playoffs." Since the debut of the playoff format in 2004, that's only happened once. The teams that can win generally have already shown their ability to do that by now.

Kenny: I don’t think it will be Paul Menard, the team seems to be too inconsistent. Although his win in 2011 was unexpected, as was Ryan Newman’s in ’13 and Kasey Kahne’s in ’17. So the “it won’t happen” can indeed happen. That being the case, I’d pencil in Jamie McMurray or Ricky Stenhouse Jr. Perhaps Alex Bowman as well.

Nick: Well, look at this race just last year. It got pretty wild in the closing laps and at one point, it seemed like Trevor Bayne could come away with the win. So keep an eye on this race because regardless off it being the cut-off race, it has the chance to produce an unpredictable winner as 2017 proved.

Tim: This is what I love about the sport of NASCAR racing, even though the odds are long for a surprise winner this weekend, it can happen. It wouldn’t shock me at all to see Ryan Newman, Jamie McMurray or even Alex Bowman pull the upset.