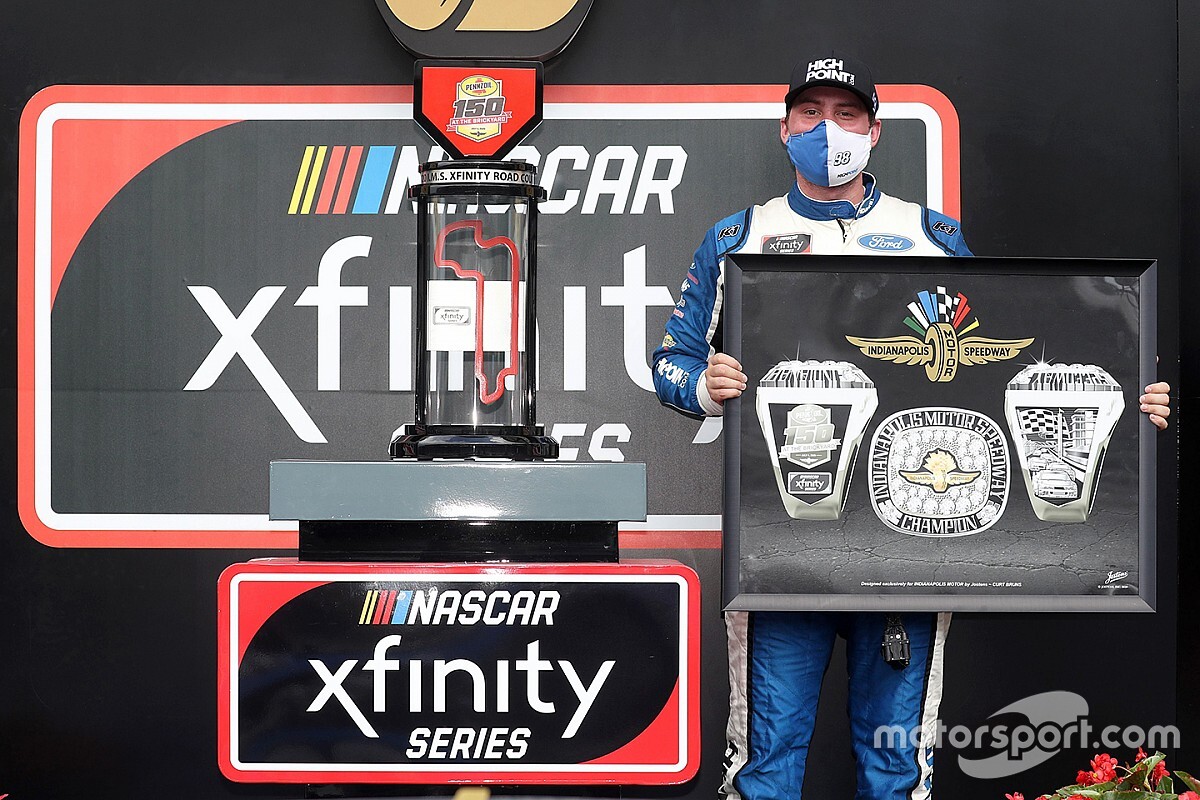 Briscoe lost the lead late in Saturday’s Pennzoil 150 only to come back and went three-wide with then-leader A.J. Allmendinger and Austin Cindric with two laps remaining and emerged the leader.

Briscoe then quickly began to pull away as the battle for position heated up behind him and he held off Justin Haley to win the inaugural NASCAR Xfinity Series race on the Indianapolis Motor Speedway road course.

The win is the fifth this season for the 25-year-old driver from Mitchell, Ind., which ranks as the second-most wins in series history in the first 13 races. Hall of Famer Sam Ard won six of the first 13 races in the 1984 season.

"Everybody knows that I grew up and my hero in racing was Tony Stewart. To get to drive for him and watch him win the Brickyard, that was always his signature thing and I just wanted to do it. Obviously it is not the same prestige as winning on the oval but you still won at Indianapolis Motor Speedway," Briscoe said. "It doesn't matter if you are racing on the oval, the road course, the dirt track or even the parking lot, it is special when you win here.

"Growing up, coming here all the time, it is unbelievable to think that I just won here."

Asked if he considered this the most significant win of his career, Briscoe said, "From a personal standpoint, Darlington meant a ton just because of what I was going through. I have dreamed of coming to this race track and just getting to race here. To win here is unbelievable. I can’t put it into words. To get our sponsors in Victory Lane and driving for Stewart-Haas at Indianapolis.

"It doesn't get any better than that.”

Noah Gragson ended up third, Allmendinger was fourth and Cindric completed the top-five.

Following the break between Stages 2 and 3, most lead-lap cars stayed out and Briscoe led the way on the restart on Lap 43. He was followed by Allgaier, Annett, Haley and Myatt Snider. Cindric restarted 11th.

By Lap 45, Allmendinger had worked his way up to fourth and Cindric to fifth while Briscoe held a small lead over Allgaier.

With 14 laps remaining in the race, Allmendinger moved into the runner-up spot, more than 2.5 seconds behind Briscoe. Allgaier ran third and Cindric fourth.

On Lap 52, NASCAR threw a caution after the car of Tommy Joe Martins was smoking heavily and dropping fluid on the frontstretch.

Most all the lead-lap cars elected to pit but Preston Pardus stayed out and inherited the lead on the restart on Lap 55. Briscoe lined up seventh, Allmendinger eighth and Cindric 12th.

Briscoe quickly pounced on the restart and grabbed the lead back.

On Lap 59, Allmendinger got around Briscoe for the lead as did Cindric, who moved into the second position and began challenging for the top spot himself.

Briscoe cut past Allmendinger and Cindric with two laps remaining to reclaim the lead.

Briscoe grabbed the lead on a restart with three laps remaining and held off Allgaier to take the Stage 2 win.

Following the break between Stages 1 and 2, most of the lead-lap cars elected to pit and Briscoe was first off pit road.

On the restart on Lap 23, Brandon Jones – who stayed out- led the way followed by Herbst and Briscoe, the first car who stopped for tires.

Allmendinger had to start the stage from the rear of the field of speeding on pit road while pitting just before caution at the end of Stage 1 came out.

Briscoe powered to the lead off Turn 4 and Cindric quickly pulled into the runner-up position to challenge for the top spot.

On Lap 26, NASCAR threw a caution as Bayley Currey stalled out on the track in Turn 13. The race returned to green on Lap 28 with Cindric getting around Briscoe leading the way.

However, NASCAR ruled Cindric jumped the restart and was forced to make a pass-through penalty under green on pit road, which turned the lead back over to Briscoe.

With eight laps remaining in the second stage, Gragson was hounding Briscoe for the race lead while Allmendinger had rebounded from his speeding penalty and was running eighth.

Jones went off track in Turn 9 as smoke and fire billowed from underneath his No. 19 Toyota which brought out a caution.

Most of the lead-lap cars elected to pit with Briscoe the first off pit road. Sieg stayed out and led the way on the restart on Lap 38. Briscoe restarted seventh.

Briscoe powered into the second position off Turn 2 and by Turn 12 had reclaimed the lead.

Cindric ended up taking the Stage 1 win under caution when debris from a blown tire brought out a caution with two of 20 laps remaining.

Jeb Burton started on the pole thanks to a random draw and led the first lap only to see Allgaier grab the lead away with a 3-wide move off Turn 7 on Lap 2.

Cindric, who turned the fastest lap in Friday’s practices, went to the inside of Allgaier for the lead entering Turn 1 on the start of Lap 5.

With 12 laps remaining in the first stage, Cindric had built up a more than 2.5-second lead over Allgaier as Haley began challenging Allgaier for the second spot.

On Lap 11, Anthony Alfredo was forced to pit as the window net in his No. 21 Chevrolet had come down.

With five to go in the first stage, Cindric built a more than 4-second lead over Allgaier. Jeb Burton was forced to pit under green with smoke pouring out the back of his No. 8 Chevrolet.

On Lap 18, NASCAR displayed a caution for debris left on the track from a blown tire off the car of Vinnie Miller.

The race could not restart in time before the conclusion of the first stage.