CONCORD, N.C. (January 10, 2002) -- Innovative Motorsports, Inc. (IMI) is proud to announce that NVE Pharmaceuticals will be the primary sponsor on the ...

CONCORD, N.C. (January 10, 2002) -- Innovative Motorsports, Inc. (IMI) is proud to announce that NVE Pharmaceuticals will be the primary sponsor on the #48 Chevrolet Monte Carlo driven by Kenny Wallace in the NASCAR Busch Series in 2002. NVE Pharmaceuticals will use the partnership to promote its STACKER 2 brand, dubbed "the world's strongest fat burner."

"STACKER 2 is extremely excited to join Innovative Motorsports in 2002. We are anxiously looking forward to next month's season-opener at Daytona and running for the Busch Series championship with Kenny Wallace," said Karen Finocchio, vice president of marketing for NVE Pharmaceuticals. "This is our first team sponsorship, and we anticipate building a strong foundation to a long relationship with George deBidart and Chris Lencheski and the entire Innovative Motorsports crew." 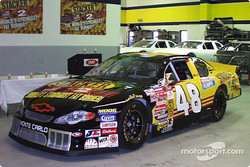 NVE has also purchased a NASCAR television package on both FOX and NBC/Turner, and plans to promote its sponsorship of the team through those channels as well as point-of-sale items in approximately 90,000 retail locations.

Goulds Pumps, which served as the primary sponsor of IMI's #48 Chevrolet the past two seasons, will assume a major associate sponsorship on the #48 STACKER 2 car. Mitel, Tiffin Motorhomes and Franklin Electric will serve as an additional associate sponsors.

Wallace finished 10th in the 2001 NASCAR Busch Series Championship. His season-long run with IMI included a win at the Sam's Club 200 at North Carolina Speedway in November. He also earned pole-qualifying positions at Pikes Peak and Indianapolis.

"Obviously, this partnership with STACKER 2 will benefit our organization in a variety of ways," said deBidart, IMI owner and president. "The company has plans to heavily promote our team next year through a television advertising campaign and marketing collateral, and we will do whatever it takes to keep this car out front. With Kenny in the car the entire year, along with Gere Kennon and our experienced crew, we are in a strong position to challenge for the championship."

NVE Pharmaceuticals, based in Newton, N.J., is the sole manufacturer STACKER 2 and an entire lineup of the world's strongest fat burners and energy products in the country. Known primarily for its nationally advertised line of STACKER products, which have helped thousands reach their weight-reduction and performance enhancement goals, NVE Pharmaceuticals is a multi-faceted manufacturing company. NVE prides itself in being a full-service one-stop shop for everything from the custom manufacturing of capsules, tablets, powders and liquids, to the marketing of its nationally known brand of STACKER products - STACKER 2 ("The World's Strongest Fat Burner"), STACKER 2 Lite, STACKER 2 Ephedra Free, and STACKER 3.

"Now, as we throw our hat into the motorsports arena, NVE Pharmaceuticals is proud to sponsor the #48 car of the extremely talented and popular Kenny Wallace," Finocchio said. "Race fans should keep their eyes on the high-energy-charged STACKER 2 #48 Chevy Monte Carlo, driver Kenny Wallace and crew because if two companies can make things ignite, it is NVE Pharmaceuticals and Innovative Motorsports."

NASCAR: Toyota - Next Gen is 'biggest change' in 50 years