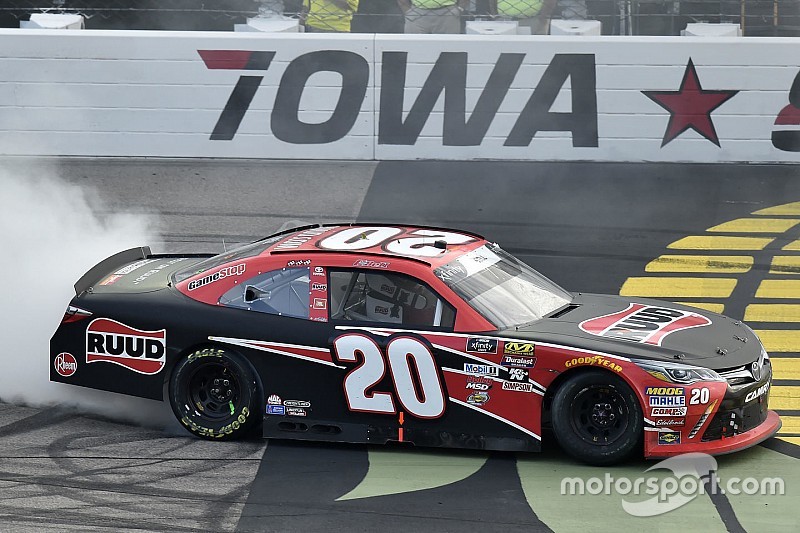 Christopher Bell is going for a record-tying fourth consecutive NASCAR Xfinity Series win this weekend and folks are itching to know how soon the Joe Gibbs Racing driver will see his name over the door of a Monster Energy Cup Series car.

Such is life for the 23-year-old standout.

On Wednesday, Bell said he “won’t be heartbroken if I don’t win four in a row,” and given his lack of road-course experience, perhaps it’s wise to go into Saturday’s Zippo 200 at the Glen (NBC, 3 p.m. ET) with reasonable expectations.

How he’ll feel if the 2019 season arrives and he’s not behind the wheel of a Cup car, well, that’s another matter.

“Obviously there’s no hole right now,” he said, noting the lack of an empty seat on the Cup side, “so that’s the biggest problem.

“And then the second biggest problem is money; where does the money (for funding) come from?”

His intention, he said, is to stay with JGR and Toyota and wherever that lands him in ’19 will be just that. Until then, there are Xfinity series races to be won and a championship to chase.

And an attempt at matching the accomplishment of Sam Ard, one of the series’ all-time legends.

Ard, the 1983-84 series champ, won 22 times in all. In ’83, he strung together four wins in a row – beginning at South Boston (Va.) Speedway in September and running through the Miller Time 300 at Charlotte Motor Speedway. In between were victories at Martinsville, Va., and Rougemont, N.C.

There were no road courses on the Xfinity schedule when Ard was banging fenders and trading paint with the likes of Jack Ingram, Tommy Ellis, Tommy Houston and Morgan Shepherd.

Watkins Glen isn’t the ideal spot to try and extend a win streak, particularly if you’ve never competed on the fast, 2.45-mile layout. Consecutive wins at Kentucky, New Hampshire and Iowa got Bell this far.

“It’s going to be a tall order to win four in a row,” he said. In part because Bell has raced in lot of places but Watkins Glen isn’t one of them. Also, there are several in the field “that have a ton of experience,” he added.

Fellow Xfinity regular Justin Allgaier “is an excellent road racer,” he said and “Daniel Hemric does a really good job” on the road courses. Toss in Monster Energy Cup regulars such as Brad Keselowski and Joey Logano, Kyle Larson and Austin Dillon and it’s clear Bell will have his work cut out for him if he’s to find the winner’s circle for a fourth consecutive race.

Getting the hang of shifting time and time again will be crucial – it’s a trait he said he’s yet to master.

“I don’t know if I’ve had a road course weekend where I haven’t blown a motor yet by missing a downshift or missing an upshift and accidentally downshifting,” he said. “That’s the No. 1 goal – to get through the weekend without blowing a motor.

“It’s just so opposite of everything that I’ve done in my past, but I’ve really enjoyed the road races that I’ve done, especially in Canada. I feel like I’ve been fairly competitive up there.”

Bell won the Camping World Truck Series championship last year while competing for Kyle Busch Motorsports. The truck scheduled included a road course stop at Canadian Tire Motorsports Park where he qualified fifth but finished 26th after losing an engine. The year before, he finished fifth.

A sub-par Xfinity Series showing last year at Road America in Elkhart Lake, Wis., has stuck with him, he finished 19th, and tempers his confidence.

“I really struggled … and that’s the only reason that I don’t feel like I could compete for the win this week,” he said.

He may not have mastered the road courses yet, but he’s proven to be a quick study at every other stop.

He’ll likely get the hang of them soon enough, record or no record.