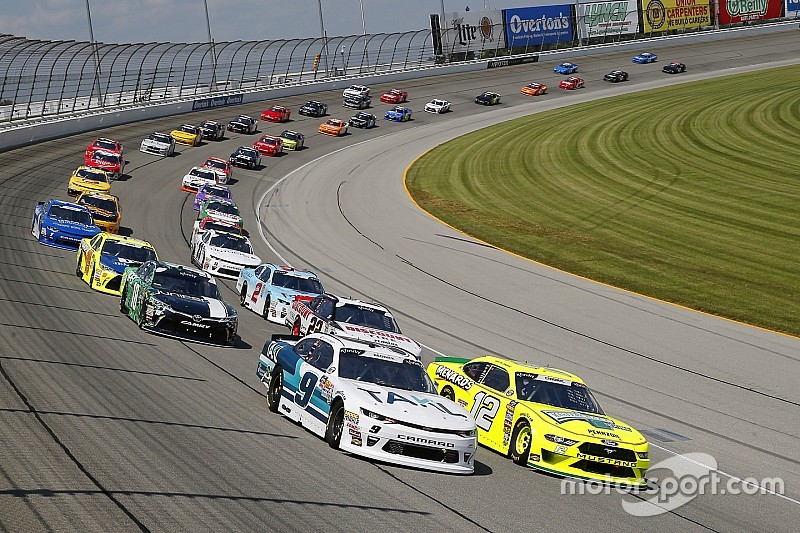 NASCAR will limit Xfinity Series field sizes to a maximum of 38 cars beginning in 2019, according to the sanctioning body.

“This rule came about in collaboration with the teams, drivers and tracks,” John Bobo, vice president of racing operations for NASCAR, said during a Thursday teleconference detailing the change. “We want to provide the fans with the strongest competition and we think this strengthens fields from the front to the back.”

There have been no fewer than 40 teams attempt to qualify for all 22 Xfinity Series races this season; more than 40 have attempted to qualify for 10 events.

According to Bobo, purse money from the two deleted positions will be distributed among the other 38 entrants.

The sanctioning body also announced changes to how it will award championship owner points in the Xfinity and Camping World Truck Series (to be renamed Gander Outdoors Truck Series) beginning in 2019.

In the Xfinity Series, team owners will only earn playoff points if the driver earns points in either the Xfinity or GOTS.

Also, a race win or wins will only count toward owner championship playoff eligibility if the driver earns points in the Xfinity or GOTS.

Truck Series owners will only earn playoff points, and a win will only count toward a playoff berth, if the driver earns points in the GOTS.

The move is to further discourage teams from using drivers outside the two series to earn playoff eligibility and contend for the owner’s title.

“If you bring a Cup driver down to race in an Xfinity Series owner’s championship, that owner would not receive the championship points,” Bobo said of the change.

NASCAR had previously limited participation by Cup drivers in its lower series, a move that will remain unchanged for ’19.

“I think sometimes you make rules because you do want to discourage certain behavior and I think this rule does discourage that,” Bobo said. “But we are also curious to see what the teams do and what decisions they make with the rule. We will be following that closely for the rest of the season and next season and see what we think.”

It was also announced that the Xfinity Dash 4 Cash program, a four-race “mini-series,” will return for 2019. Texas Motor Speedway will host the qualifying race on March 30. The opening event will once again be held at Bristol Motor Speedway, with remaining stops at Richmond, Talladega and Dover.