The NASCAR Nationwide Series title is the fourth for Ford Racing and Roush Fenway Racing (Greg Biffle in 2002, Carl Edwards in 2007 and Stenhouse Jr. in 2011). 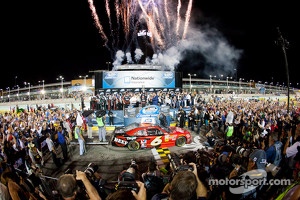 Biffle captured the 2002 NNS title in dominant fashion as he posted a series-best 25 top-10 and 20 top-5 finishes in 34 starts. In addition, he tied for first with poles (5) and wins (4), but his consistency throughout led to a 264-point victory for the championship over second-place Jason Keller.

Carl Edwards won his first NASCAR championship in even more dominating fashion than Biffle as he claimed the championship by 618 points over runner-up David Reutimann.

Edwards led the series with 21 top-10 finishes while tying for most top-5 efforts with 15 in 35 starts. He swept both races at Nashville for two of his four wins on the season with the other two coming at Bristol and Dover.

Edwards was in charge of the points race pretty much the entire season, taking the lead after a fourth-place finish on the Mexico City road course in the third event of the year and never giving it up.

Ricky Stenhouse Jr. won his first NASCAR Nationwide Series championship in only his second full season of competition through consistency.

He led the point standings for 17 weeks, including the final 14, and won the first two races of his career as he swept both events at Iowa Speedway.

Stenhouse Jr. battled Elliott Sadler the final month of the season, but came out on top by virtue of six top-5 and nine top-10 finishes over the final 10 races.

RICKY STENHOUSE JR. – No. 6 Cargill Beef Ford Mustang – “We were loose. We’ve had loose race cars before and made an adjustment there.

I was questioning how far we should go, but I think we went a little too far to have a run at it there at the end. I got a little too tight, but I can’t say enough about these guys. It’s been fun.

I’ve got to say hi to my granddad at home. He’s not doing as well as he needs to be, so I want to say ‘hey’ to him and we’ll see him soon. But I want to say Happy Thanksgiving to everybody else as well.”

YOUR LAST RACE WITH MIKE KELLEY AS CREW CHIEF. WHAT DOES IT MEAN TO YOU WHAT THESE GUYS HAVE GIVEN YOU THE LAST TWO YEARS? “It means we’re leaving Trevor in great hands.

These guys have done an awesome job. Mike has been a great crew chief to work with, but, more than that, he’s a great friend.

THIS IS THE FIRST TIME IN ROUSH FENWAY HISTORY SOMEONE HAS GONE BACK-TO-BACK. WHAT A SEASON. “Thank you. It is unbelievable. These guys have put a lot of hard work into it.

From the engine shop to the body shop and chassis shop these guys that go on the road and their families. There are a lot of people that have put a lot of effort into this. I am just the lucky guy that gets to drive it.”

THIS SEASON, YOU HAD AN ADVANTAGE AND THEN THINGS WENT DOWNHILL A BIT, ESPECIALLY AT DOVER. DESCRIBE THE RESILENCY OF THIS RACE TEAM. “We never give up. It doesn’t matter how beat up the car is.

It doesn’t matter what the circumstances are. We dig as hard as we can. It is a group of racers and that is what racers do. They race hard whether it is over the wall, in the pits, in the garage or us out there on the race track. It is special to be in this position.”

BEING A TWO-TIME CHAMPION NOW, DO YOU UNDERSTAND THE ENORMITY OF THIS? “Yeah, it is really neat to be able to go back-to-back when only now six of us have done it. That is pretty special.

It really makes me see how hard that 48 team works on the Cup side with five in a row. It was a great two years and we have had a lot of fun. We look forward to our opportunity next year.”

MIKE KELLEY, Crew Chief, No. 6 Cargill Beef Ford Mustang – “It has been a long season, 33 or 34 weeks, whatever it is. Starting over with a new team and then week in and week out we had some highs and lows and it came down to this.

This is what we set out to do after we got here last year. Ricky is such a good champion. He worked hard, we worked hard and set our goals high. It is really nice to get them.”

IT GOT CRAZY THERE TOWARD THE END, FOUR-WIDE AT ONE POINT, HOW WAS THAT VIEW? “Well, that is just the racer in Ricky. He wants to win every race we are in and you can’t ask more than that.

We were big picture racing and just had to do what was right tonight which was not lose our sight on what we set as our goal back at the end of last year. It was good.”

JACK ROUSH, co-owner, No. 6 Cargill Beef Ford Mustang – “It is great to be here on Ford Championship Weekend under any scenario when we have competitive Fords. Ricky Stenhouse has won our first back-to-back championship for a driver in a series.

We had back-to-back Cup championships in 2003 and 2004 but with different drivers. He did a great job and he has made a great champion and is going to make a great Cup driver next year.”

MICHAEL ANNETT – No. 43 Pilot/Flying J Ford Mustang – “We started off as one of the fastest cars on the track, but starting 32nd isn’t gonna help you at all. That’s the second week in a row we put on tires and it felt like we made 50 different changes.

We didn’t really have the car we needed until the second-to-last stop and then we put on tires there at the end and had only one goal – and that was to keep the 31 in our sights.

We went car for car all the way through there and came home. I don’t know where we even finished, but I know we’re going on stage.”

THE FACT THIS DEAL CAME TOGETHER SO LATE AND TO HAVE THE SEASON YOU DID, HOW DOES IT FEEL? “I wish it wasn’t over. We started off probably a little bit too slow, but how could you not starting a month before the season started.

The way we improved at about the halfway mark is a testament to how hard these guys were working and what they’re capable of and, like I said, I wish the season wasn’t over because I think now we’re just hitting our stride.”

WHAT DOES IT DO FOR YOU TO HAVE A YEAR LIKE THIS AND KNOW THIS DEAL IS IN PLACE NEXT YEAR? “Now it’s time to go win races. We’ve proven we can run top five.

We’ve proved we can run top 10 easily so now it’s time to just start bringing home wins and be where the 6 car is right now.”

Austin Dillon clinches 2012 Rookie of the Year Honors in Miami

Montoya: ‘Crazy’ to penalise F1 drivers for defending outside moves