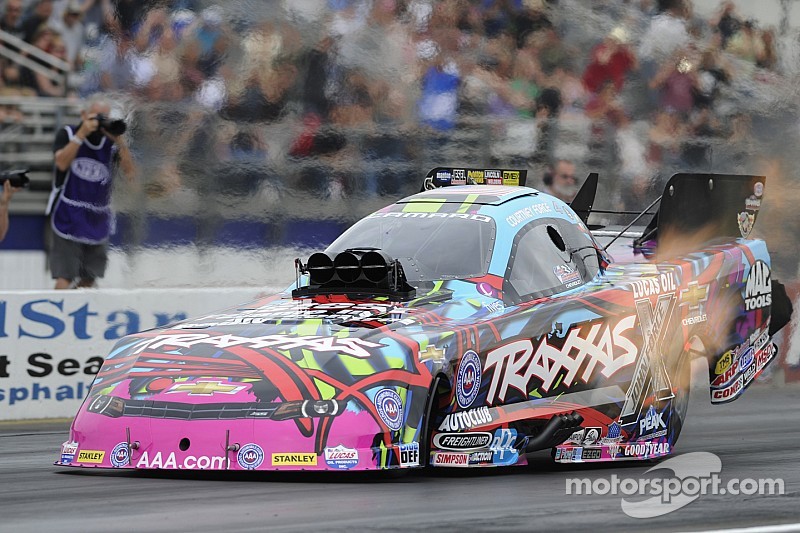 Force ran a 3.996-second pass at 321.58 mph in her Traxxas Chevy Camaro during the second session of qualifying at Wild Horse Pass Motorsports Park to take the top spot in her category and record a track record speed. Force was the only Funny Car racer to record a run quicker than four seconds on the first day of qualifying. At the season opener in Pomona, Calif. two weeks ago, Force sprinted to a 3.995 second run in the third round of qualifying to enter race day No. 1.

“We just tried to get down there and put up a good, solid pass,” Force said. “It feels good to put a three-second run on the board this year and not just once. It’s fun for the team. We’ve never had the best luck here, so we’re trying to turn that around.”

Reigning event winner Alexis DeJoria is second in Funny Car with a 4.000 at 313.58 in her Patron XO Café Incendio Toyota Camry. Del Worsham is third in his DHL Toyota Camry with a 4.005 at 318.27 while Matt Hagan, the reigning world champion, qualified fourth with a 4.025 at 316.60 in his Mopar Express Lane/Rocky Boots Dodge Charger.

In Top Fuel, Schumacher recorded a performance of 3.722 at 325.61 in the U.S. Army dragster during the final pair of cars on the final session, marking the quickest pass of the eight-time world champion’s career and a track record for time. At the season-opener in Pomona, Schumacher was upset in the first round of racing.

“Mike Green [crew chief] and Neal [Strausbaugh, assistant crew chief] didn’t like what they saw in Pomona and made some changes,” Schumacher said. “I feel like this track has really come around. We just ran my quickest run ever right here, right now. The fans are getting their money’s worth. Kalitta, [Shawn] Langdon, and our team cars can pull off miracles, but barring a miracle, I think that's going to hold.”

In Pro Stock, reigning world champion Enders-Stevens took the qualifying lead with a 6.545 at 211.20 in her Elite motorsports Chevy Camaro.

“We’re still learning, trying to acquire some data, and having some team cars out there really helps,” Enders-Stevens said. “We’ve got four guys in Pro Stock, including myself, that are running Elite Performance power, and three of us are 1-2-3, so I’m very proud of my team. I’m happy to be on top here after Friday, but we’ve got our work cut out for us tomorrow.”

Rodger Brogdon was second with a 6.545 at 210.90 in his RoofTec Camaro. Rookie sensation Drew Skillman, who was runner-up at Pomona in his first career start, qualified third with a 6.548 at 211.03 in his Camaro. Allen Johnson won Phoenix in 2014 and sits fourth in the qualifying order with a 6.551 at 211.36 in his Magnetti Marelli Dodge Dart.

Qualifying continues Saturday with sessions at 1:30 and 4 p.m. Sunday’s eliminations are scheduled for 11 a.m.