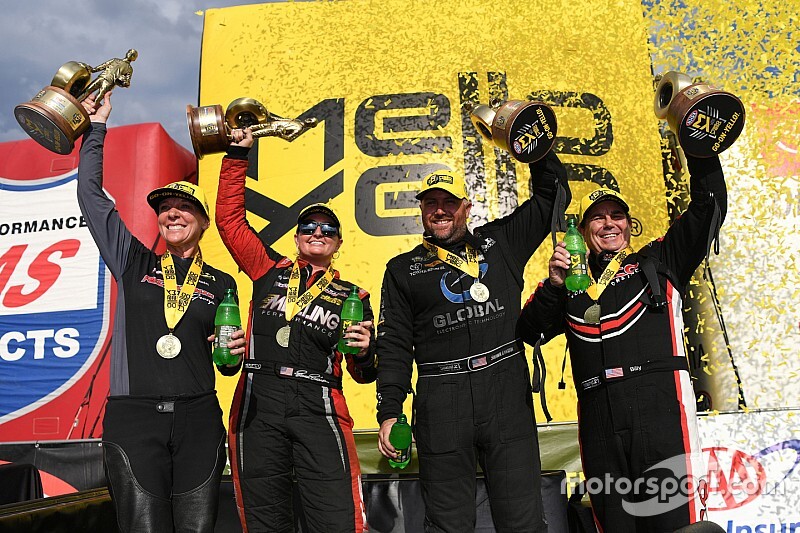 Todd, who is now fifth in points, picked up his 33rd final-round appearance with wins against Jack Beckman, No. 1 qualifier John Force and Robert Hight, who took over the points lead on Sunday. It was also the first all-Kalitta Motorsports final round in Funny Car since 2016, a matchup that included Del Worsham, who is the co-crew chief on Langdon’s car.

“What an incredible day,” said Langdon, who climbed to seventh in the Funny Car standings. “Going through qualifying, we had a consistent car. We’ve got such a great group of guys and it was a pretty good day. Anytime you can get a win in this class, it builds momentum. We had to make some big changes coming into St. Louis and the car was flawless for me to drive. I love racing for Connie [Kalitta]. He just has so much passion. He’s a great motivator and a great leader, and we just follow his vision. We all just work together.”

Torrence beat his son, Steve, in an all-Torrence final round, going 3.835 at 319.67 in his Capco Contractors dragster. It was the second time they have met in the finals, and just the third father-son final-round matchup in NHRA history. B. Torrence beat Kyle Wurtzel, points leader Doug Kalitta and Leah Pritchett to reach the final round before picking up his third win this season and fourth in his career.

Torrence reached the final round for the 52nd time in his career, as the defending champ beat Scott Palmer, Pat Dakin and No. 1 qualifier Mike Salinas. The runner-up showing also pulled him to within two points of points leader Kalitta, but the final round belonged to his father, who moved to ninth in the standings with four playoff races remaining.

“To get to race Steve in the final was the goal,” B. Torrence said. “We watched how we qualified and we did a good job of staying on opposite sides of the ladder. It came out a little better for me in the end this time. It’s tough to come out here. You’re at the pinnacle of drag racing on this level, but I’ve got to have fun. It’s just a blessing to get to be out here with my family. We’ve raced everything and it’s just really fun. It’s a family sport and we’re right in the middle of it.”

Enders snapped a winless drought that stretched back to early last year by going 6.598 at 208.36 in her Melling Performance/Elite Motorsports Camaro to slip past Matt Hartford’s 6.621 at 207.30 in the final round. It gives Enders, who was also the No. 1 qualifier this weekend, her 24th career win, and first since the four-wide race at Charlotte last spring. She reached the final round with victories against Alan Prusiensky, Aaron Stanfield and Chris McGaha, jumping to second in points.

Hartford, who moved to fourth in points, beat Kenny Delco, points leader Jason Line and Bo Butner to reach his sixth career. final round. Both drivers had great reaction times in the final round, but Enders was able to chase down Hartford for her first victory of 2019. Stoffer and Enders’ win also marked the first time in NHRA history that females won in both Pro Stock classes at the same race. It also marked the 148th and 149th win for females in NHRA history.

“We just had to pick ourselves up and we redeemed ourselves after our poor performance in Reading,” Enders said. “I’m ready for the remaining four races. I put my money on us. It’s all come together at the right time.

“It feels like it’s been eternity since we last won in 2018. We just continue to keep our heads down and working hard, and this definitely means a lot to our entire program. I knew every time we fired that bad boy up, we were going to go out and make a really great pass.”

Stoffer picked up her first win in four years in Pro Stock Motorcycle after going 6.869 at 197.74 on her Stoffer Enterprises/Big St. Charles Suzuki to beat points leader Andrew Hines’ 6.871 at 196.59 in the finals. It is Stoffer’s ninth career win as she also jumped to second in points behind Hines.

Stoffer reached the final round with wins against Ryan Oehler, defending world champ and No. 1 qualifier Matt Smith and Eddie Krawiec. Hines beat Michael Ray, Angie Smith and Steve Johnson to advance to his 95th final round, as Stoffer and Hines matched up in the finals for the first time in nine years. Stoffer was quicker off the line and rode her way to her first win since 2015.

“I really don’t feel the pressure out there because every team is phenomenal,” Stoffer said. “I listened to the team and did what I had been doing. We had Matt, and then Eddie and then we had Andrew. Out of all the heavy hitters, those are it. We just went out and did our job.

“The Suzuki platform definitely went through some challenges and we’re not one of those high-budget teams, but we have fun. It’s been a long time (since her last win), and I wasn’t even scheduled to race this year, and here we are in the top 10 and winning a race in the Countdown.”